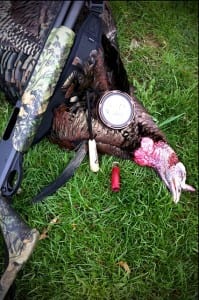 The buzzer on my alarm clock rang early the opening morning of 2013 Pennsylvania turkey season. I had been waiting for this day and it was finally here. In 2012, I called in my own bird for the first time, and I wanted to do it again this year. I grabbed my gear, slung my new Remington 12 gauge over my shoulder, and hit the woods.

I climbed into my ground blind while it was still dark. I patiently waited as the sun rose and the songbirds began to sing their tune. I was set up at the head of a large valley. I knew the turkeys were roosting in some of the large trees located here. And I was hoping to catch one right off the bat. However, it did not work that way. The morning was rather quiet. I managed to call in a couple hens, but that was it. The sound of rain hitting the top of my blind was a constant reminder that if I decided to move, I would get wet.

I pulled out my phone and opened my weather radar. I watched the large mass of rain and snow mix sweep over southwestern Pennsylvania on the map. Another dismal day, I thought to myself. It seemed to be a reoccurring event on my hunts. Nevertheless, it was a day in the woods, which beats doing anything else in the world.

Around 8 AM I climbed out of my blind. The rain had lightened up a little bit, and I headed up the ATV trail. I figured the best place I could go to was the fields. Every turkey hunter knows that when it’s rainy the turkeys move to the fields. I knew if I could sneak into a tree line between two old farm fields, both bordered by thick bottoms; I would have a good vantage point. Possibly I could pull something out of one of those bottoms. There was nothing gobbling, so my only chance was to set up and wait. I stepped out into the field and headed towards that tree line.

I drove the stake of my hen decoy into the ground about 20 yards from me. I proceeded to find a comfortable tree in the tree row with some open shooting lanes. The temperature was dropping and it was now sleeting. The ground had a thin coat of white blanketing it. I could not help but have a little doubt. Here I was hunting turkey in a cold wintry mix. I was cold myself and my slate call was starting to sound a little off tune. I wasn’t about to give up. I periodically let out a call from my H.S Strut “Raspy Old Hen” call and waited. For almost 2 hours I called and waited, over and over. Nothing gobbled, nothing moved, the woods was practically dead.

It was nearing 10AM by this time. I was not discouraged because it was only the first day. I was sitting there in a little disbelief that I had not even heard one gobble. Suddenly I looked to my left. Without a peep, a gobbler stepped out of the tree line I was sitting in. The gobbler had crossed the field behind me, without me even seeing it or hearing it. It came in as quiet as a mouse.

The gobbler walked towards my decoy. The sway of its beard made my heart beat even faster. It was as if it was meant to be. I was jumping with excitement on the inside, yet I hadn’t even harvested the bird yet. I settled the bead of my shotgun on that red head and squeezed my shot off. The shotgun blast was like music to my ears. I watched the big tom slam the ground, rain splattering off its feathers. All of a sudden, I was no longer cold, no longer having any doubts, and for a few minutes did not have a worry in the world. Like clockwork, my cell phone was to my ear calling my Dad, to tell him I had just taken a nice bird. I always feel so proud calling my Dad and telling him what I just accomplished. He knows the hard work it takes and can appreciate each experience for what it’s worth. I love sharing the experience with him, and having him there by my side. I tagged the bird and hoisted it up over my shoulder. I began the walk home, feeling like I was on top of the world.

My 2013 gobbler had a 10 inch beard. Its spurs measured one and a half inches, which are quite large for a bird in Pennsylvania. It was a trophy in my books, and will always remain so. As always, I thank God for that day and that gobbler. It will always be engraved in my mind as a great memory and extraordinary experience that I was fortunate enough to take part in.