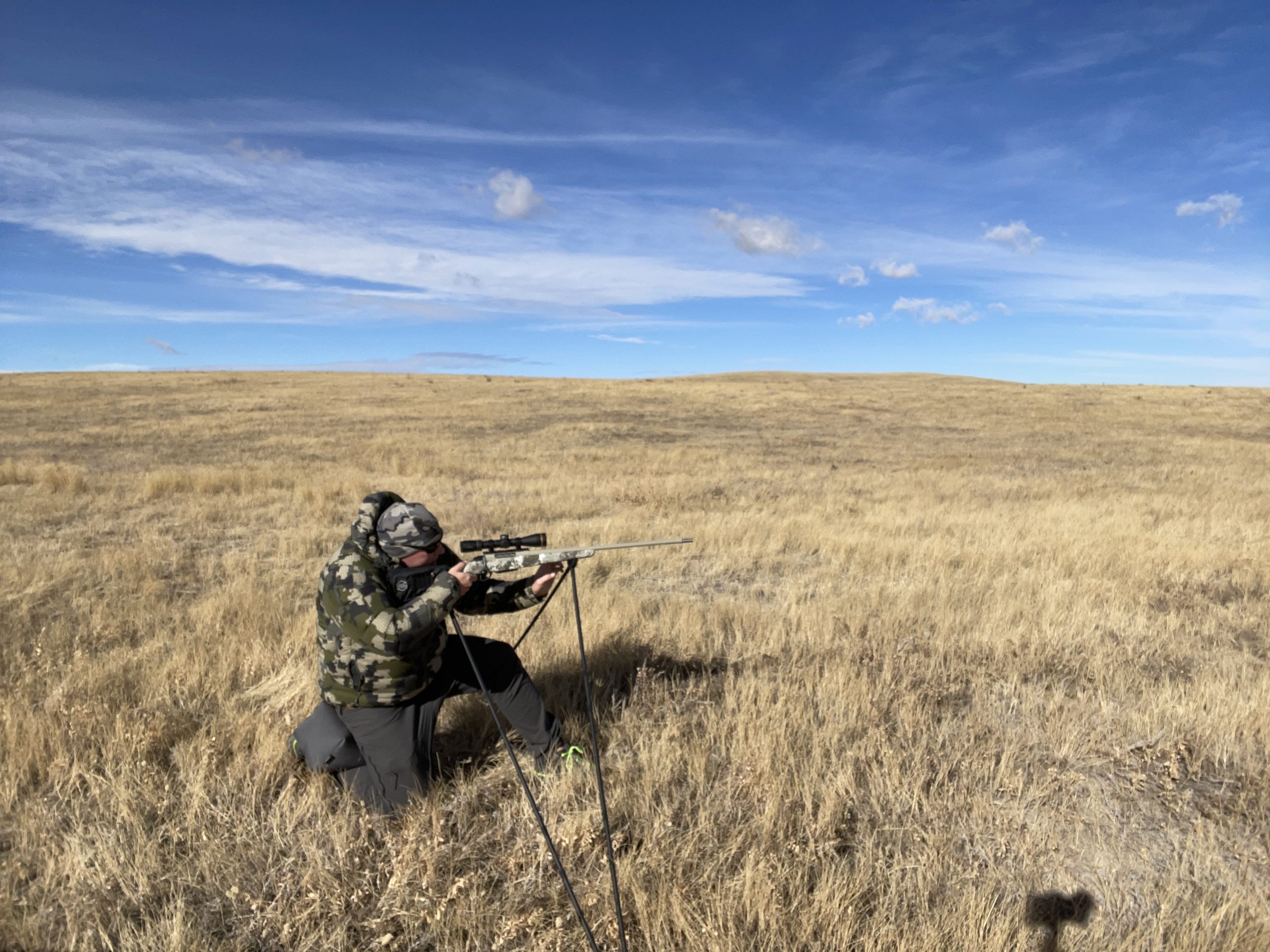 Hunting here in Wyoming there are a few critical pieces of gear a hunter needs to be successful in the unforgiving western terrain we often encounter.  One of them is something that provides a stable shooting position.  Nowadays you have a lot of options in this category, some more complicated and with more moving parts than others.  Complications and parts can be translated into less dependable and heavy.  You already have a pack, binoculars, spotting scope, rifle, and water.  The last thing you need in this instance is more weight to slow you down.  That’s where 4 Stable Sticks comes in.

I was able to take 4 Stable Sticks – Ultimate Carbon out on some wide-open, public property here in Wyoming recently for testing.  The temperature was 34 degrees and the wind was maybe 5 mph with gusts of 10 mph, but otherwise a beautiful sunny day.  My goal was to test them in similar conditions to the hunting scenarios I often find myself in.  Also, I wanted to be able to use my rifle, a Tikka T3X Lite Veil chambered in 270 WSM, at ranges between 200 and 400 yards.  I also wanted to practice shooting both standing and seated or kneeling at those distances. For this test, I shot three test groups, one at 300 yards standing and two at 400 yards standing and kneeling.

With an 18” diameter steel gong set up (roughly the vital area of the medium to large game that you’ll be after), I moved back to within 300 yards of the target then unpackaged and assembled the shooting sticks for the first time.  Keep in mind the only directions the user gets are on the outside of the box.  There’s no manual, or paperwork inside.  There is however a very nice burlap bag to store the shooting sticks in to ensure you don’t lose anything while traveling. It took approximately 5 minutes to assemble the sticks initially.  I actually attached the front and rear rest in the wrong position and quickly corrected it.  The second time I assembled the sticks, it took me 1 minute, 18 seconds without rushing.  It’s most likely how long it would take leaving from the truck or glassing spot to go after that deer.

I already mentioned the rifle I’m using, the Tikka T3X Lite.  It’s become an extremely popular rifle here in the US, especially with guys who like to tinker and upgrade.  Tikka has outstanding aftermarket support for their rifles.  The glass on top is a Leupold VX-5HD 2-10×42.  The cartridge I was using was a Winchester 140 grain Accubond.  The total weight of this setup with one empty mag is right around 8lbs, 15 ozs.  It’s not ultralight, but the weight tames recoil quite nicely.  This is a pretty standard setup and weight for western game and the caliber is sufficient for the larger Mule Deer and Elk you might encounter.

With the shooting sticks assembled I proceeded with the 300-yard test.  While standing behind the shooting sticks, I fired three shots at the gong and watched through the scope.  To my surprise, I’m a better shot than I thought I was and connected all three times.  You’ll see the smaller shots to the lower right indicating where I impacted (photo).

The design of these sticks allows you to adjust for the height of the shooter and his/her position and leaning backward or forward tips the sticks back and forth allowing the shooter to adjust for elevation.  The front rest of the shooting sticks is the flat rubber bar.  This allows some adjustability for the shooter to move left or right without having to reposition the sticks.  I did find it comfortable to use my left hand and grip the stock of the rifle and that rubber bar simultaneously.  It also gave me that last bit of stability I was looking for.

At this point, I was ready for the 400-yard test.  Using the same method as above and still standing, I leveled the rifle and again connected with the gong all three times.  Keep in mind, with these shot strings there was time in between each shot where I corrected my position, adjusted the rifle, and found the target before firing again.  You’ll see the 400-yard impacts on the gong as the much larger three-shot string across the middle of the gong (photo).

Now I’m impressed.  A shot that most shooters aren’t even comfortable with on the best of days I was able to make successfully on shooting sticks I’ve never even used until today.  So I decided to push the limits of the sticks a little and see if they can support me while kneeling (photo).

So again at 400 yards, I stretched the two feet of the sticks as wide as I could get them to lower the rifle rests.  I put a cushion under my right hip to stabilize myself and wouldn’t you know it, I connected again, and at 400 yards.  I will say the sticks were bending and I wouldn’t make it a habit of using them in this manner, but it works.  Carbon has a tendency to just snap when it reaches its limit.  Would that have happened if I did this all the time?  I can’t say, but for what I needed them for they were more than sufficient.

In between the shot groups, there were moments where I had to leave the rifle and sticks to get something in my vehicle, so I tried to get creative with the sticks and I was able to create a stand for the rifle out of the sticks, so my rifle didn’t have to lay in the dirt, I hate having to do that.  While hunting I always lay it on my pack or just hold it, but in this case, the sticks even helped support the rifle while I stepped away.  I can’t say the original designers planned on that, but it was extremely handy.

I’m happy to report these sticks work fine assembled as a walking stick (photo) and you can even semi-dissemble them, so they are short enough to strap to the outside of your pack until you’re ready to use them.