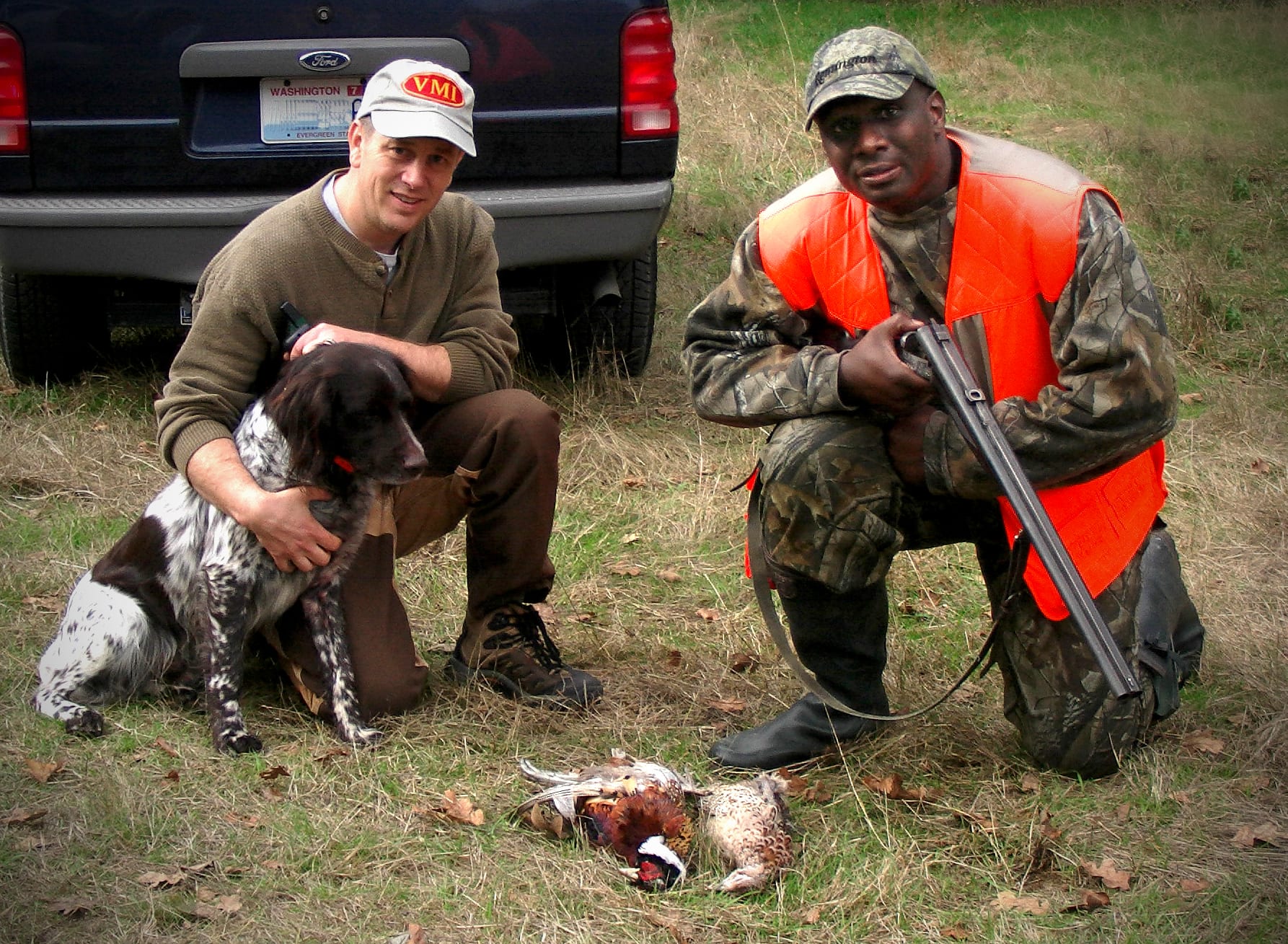 When I arrived at combined Armed Forces installation Lewis-McCord in Washington State in early summer this year, I immediately thought of hunting in Europe. After having an open hunting season throughout the summer months there, being in the US was a transition to say the least. I could hardly wait to get out in the field, but being a new hunter in the area; it would not be that easy to make solid hunting contacts, or so I thought. But to my good fortune, I was wrong! After asking around the facility, I was able to contact Steve Gray, an avid bird hunter also known as a very good all round hunter on the installation. I can tell you that pheasant hunting in Lewis-McCord was interesting; educational and very different compared to my experiences with the organized pheasant hunts in Hungary.

To my advantage, my first pheasant hunt, after returning to the USA on this sunny afternoon of 15 Oct 2011, would be conducted with a very special bird dog named” Jaeger”. His owner (Air Force COL Steve Gray) conducted a morning hunt and was able to complete his hunt and bag his limit within an hour and his dog wanted more. Steve (Col. Gray) came back because I did not have a bird dog for the hunt and Jaeger was sad that his morning work was finished so quickly, in less than an hour. Jaeger is truly an exceptionally trained, obedient pointer and as a result of his abilities and superb skills, I was able to make my limit of two pheasants. I loved watching this bird dog work the open fields of the training areas of Lewis-McCord.

As you can imagine, I was on pins and needles the entire morning of 15 Oct and when I left home at noon (1200) to make the 30 minute trip from my home to Lewis-McCord training area 13. The nervousness increased the closer I got to my destination. I arrived at the site 30 minutes ahead of the planned meeting time of 1PM (1300). When I arrived at the training area, Steve and Jaeger were already there. I met Jaeger, noticing how obedient he was, as he remained seated beside his owner.

After a short safety briefing and orientation of the area, we started the hunt. When the hunt began, the first command I heard from Steve was “FIND THE BIRD JAEGER” and off he went. He ran into the field scanning from side to side, sniffing the air until he picked up his first scent. His head went down to the ground and his tail stopped wagging and pointed. I was so excited this was my first pheasant hunt of the year. As I went in to flush the bird out, guess what happened! I shot and missed the first Cock. But it was ok, Jaeger just kept scanning the field, side to side, and listening to his owner’s commands.

Once again, Jaeger stopped and pointed. I went in again to flush the game; fired and again missed. This time it was a Hen. I felt like Jaeger was looking back at me saying in his dog voice “what are you doing, I am showing you the birds and you can’t hit them?”. But I did not give up because Jaeger did not give up on me.

As we walked up the field, he caught the scent of another bird and stopped and I went in very nervous when suddenly another Cock came flying out of the tall grass. “BANG”, I got him this time! Jaeger ran the bird down and waited for the command from Steve “Get the bird boy”. He retrieved the Cock and returned to his owner. It seemed like Jaeger was smiling as Steve said, “Good boy” and he dropped the bird.

Now the pressure was less as Jaeger went back to work. Then Steve asked me, “Do you want to give him the commands?”. Steve had found a lost dog (a puppy belonging to someone else) that he wanted to get back to its owner as soon as possible. So he left with the dog he found and left me with Jaeger! Once again, the pressure was on, because this wasn’t my dog and I wanted to get my second bird. I really did not need to worry because Jaeger knew what to do and how to do it; I said “FIND THE BIRD JAEGER” and directly following this command, off he went looking for a scent.

In less than 60 seconds, he caught a scent and pointed. I went in slow and stopped, Jaeger pointed harder and looked back at me as to say, “Go get her”. I stepped closer and with my next step, out flew a Hen. “Bang”, and once again I had another bird on the ground. I gave the command, ”Get the bird boy” and Jaeger knew what to do. He retrieved the bird and brought it to me and I gave him his well deserved praise of “Good Boy”.

The hunt was over. I had my limit and the satisfaction of a very successful hunt to start the season. I also had an exceptional outdoor experience. It was truly very amazing to watch a bird dog of this caliber at work and Jaeger showed me how important it is to have a very well trained hunting dog.

Whether you are hunting pheasants in the fields, tracking deer or wounded pigs in the woods, your hunting dog is always your right-hand man in the field and truly MAN’S BEST FRIEND.