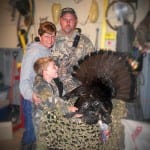 It’s always a great feeling when you raise a young man to appreciate God’s words and his great outdoors. Levi asked me again today, how many days till I can go turkey hunting? I told him it starts tomorrow morning son. I got dressed and went to roost the turkeys. They flew up just outside my property line. I came back inside and told him, we were ready for opening day. You should’ve seen the big smile he gave me. He asked if he could take my 410. I said take the 20 gauge, so he went and pulled it out and put it on the table.

The next morning at 4 am, I was starting the coffee when he said it’s time to turkey hunt. Yes son it’s time, I said. I had a friend Randy Moore and a youth Jamey Cantwell that were joining us. They pulled up excited and ready to start hunting. We sat for a little bit, drinking coffee and talking about what I saw the night before.  Then we got the equipment ready and headed over the hill and into the ground blind. We set up the camera and got the shooters ready. When we started to see the first signs of daylight and the sky brighten, I knew it would not be long.

Half an hour went by and I pulled out my glass call and did a few loud yelps. Man did those toms gobble and gobble! I was smiling from ear to ear. I looked at Levi and he was asleep, I had to chuckle. I looked at the sky, and then did a fly down with a fly down call. I waited ten minutes and then heard the turkeys flying down with hens yelping. I called back and heard nothing. As soon as they hit the ground they stopped talking. A couple minutes later I called again and heard nothing. Ten minutes later I called with a mouth call, and heard a gobble. Boy was it close!

I got Levi ready and looked at Randy; he was ready with the camera. So I yelped softly to make him think the hens were leaving. Soon after I heard a tom spitting and drumming outside the blind, but I could not see him. A minute later we saw a couple hens and behind them was this huge tom strutting and drumming. Levi’s eyes lit up like light bulbs, and I whispered, wait till you have a clean shot. I heard the safety click off and Randy had the camera on the tom ready. I told Levi when you’re ready shoot. He waited till the tom was 10 yards away and pulled the trigger. The tom went straight to the dirt.

Editor’s Note: Here at WILD Jaeger we value family and the great outdoors.  If you have a child or can be a mentor to a child, we encourage you to spend time out it nature with them.  Get that child his or her hunter safety certification, teach them the respect all weapons deserve and take that child hunting.  Make memories that will last a lifetime for your family, respect the game animals, be safe and shoot straight.