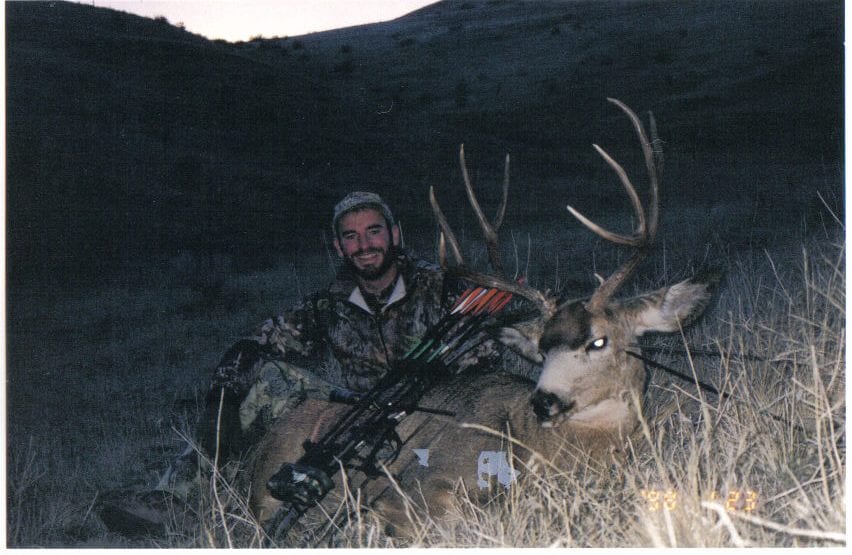 Sweat ran down my back as I made my way almost to the top of the ridge through the tall moist grass and brush. I knew the buck was close and I knew the only way I would get an acceptable shot with my bow was to find him before he saw or smelled me. I inched ahead one small step at a time, all the while sweeping back and forth with my binoculars trying to find an ear tip or antler tine sticking above the tall grass or hidden behind one of the short sagebrush bushes growing on the south face of the ridge. Anticipation and adrenalin surged through my body as an ear tip materialized from behind a large bolder. The range was just over sixty yards, but I felt I could crawl to within forty through the soft slightly damp grass. I did my best snake impersonation as I slithering forward. This was one of the ideal situations that rarely happens to me while bow hunting in my home state of Idaho.

The buck’s head and body were hidden behind a boulder while one antler and his left ear protruded into my line of sight. He appeared to be taking a rest from the rigors of the rut. I had first seen the buck four hours earlier, but he had been in the wide open and I had no way of getting to within archery range without being detected. I decided to watch him hoping he would make a mistake and allow me an opportunity to close the distance. Several hours in to my vigil I was not disappointed. I watched him climb out of the bowl that I had first
seen him lying in. My hope was that he was attempting to find a bed in the sun.
I was sure the warm sunshine would put him to dream land and I hoped that his
little siesta would allow me the time I needed to cross the gouge between us
and gain the elevation I would need to approach him from downwind.

As I crept closer my nerves started to kick into overdrive. At one point I was
sure I heard the pounding of deer hooves and could only image that the gig was
up. That the buck had smelled or heard me and that he had suddenly escaped
again. After a few tense seconds I realized the pounding was coming from my
chest and that my heart was racing. The sound of my own heart beating had
played tricks on my mind. As the distance to the bolder lessened, the angle of
cover it provided started to dissipate. I decided to switch from a forward crawl
to a crab like shuffle. My feet lead the way as I followed with my hands. My
bow was cradled in my lap, as I closed the distance. This position allowed me
to glass the buck almost without stopping as I inched closer. I am sure he
never knew of the impending danger, but the herd of does he was fraternizing
with seemed to sense my presence.

After only five or six minutes I had closed the distance to forty yards well within
my effective range. I eased up onto my knees as I prepared for the shot. I
could see the back of the buck’s head, most of its neck and the very top of it
back. I still did not have a shot though. My arrow was on the string and my
release was clipped on and ready for action. The buck was still in his bed, but
he had started to watch the does below him. The does started to get nervous and
the buck noticed their anxiety. I felt like a puff adder poised and ready to strike
at any time. My only fear was that he would somehow be warned of my presence
and boil from his bed not giving me a shot.

My fears were justified, because a doe below me started to blow and stomp. The
buck jerked from his nap, got up out of his bed and took a few seconds to
survey the landscape for the threat the other deer sensed. This was all the
time I needed. I yanked the bow back centered the forty yard pin and planted in
squarely behind his massive shoulder. The arrow was at the target before I even realized I had shot. The buck
jumped and raced off the mountain heading for the already retreating does. He
never made it. I saw him take his last steps as he started up the other side of
the grassy bowl.

This hunt took place on a late season, archery only, hunt on public land outside of
Boise, Idaho. A hunt in Idaho at this time of year generally has much more snow and colder conditions. If you are interested in hunting in this
state at that time you should plan accordingly. I suggest layered clothing in
an assortment of sagebrush and grass type camo patterns. In addition to that I
would also recommend a good snow camo just in case the snow is deep while you
are hunting. When hunting in the snow footwear is even more important than
usual because of the threat of frost bite or at best cold toes. I recommend a
heavily insulated hunting boot or Pac style boot. I have had some of my best
hunts in more than a foot of snow.

Generally, snow makes spotting deer easier, but it can also make hunting them that much
harder due to the crunchy conditions. This year the cold weather was slow in
getting here. This meant that not as many deer were pushed into the lower elevations
as early as normal. The conditions made for a challenging hunt and not as many
opportunities for a big buck were possible. The hunt in this area is a
controlled hunt so that there are limited numbers of hunters in the field. Conditions are perfect for someone looking
for a good quality hunt and wishing to limit themselves to archery gear from
late November to early December.

If anyone is interested in this type of hunt, or any other controlled hunt in Idaho, you must submit your
application before June 5 annually. There are many good quality hunts in the
general season as well as the controlled portion of the hunting year. The best
way to learn about controlled hunts in Idaho is through the “Idaho Fish
and Game” website located at: http://fishandgame.idaho.gov. Good luck and
remember it’s about the traditions, so take a kid hunting with you.