A Season for Learning 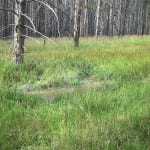 Elk hunting is a positive experience whether a hunter is successful or not. You’re in the mountains with a chance to harvest an incredible animal, enjoying the fresh mountain air and watching wildlife all day long. Some seasons however are tougher than others. And what you bring home might not be the cooler full of meat you were banking on; but a notebook chalk full of the knowledge you’ve gained through the school of hard knocks. My 2012 archery elk season was no different. From the get go, I was off to a bad start.

Figure 1 “Photo” A fire on the mountain to start my first day of hunting….not a good sign.

The season never really improved over the course of 9 days. Make no mistake 9 days is a lot of hunting of one species for the average Joe, who typically hunts once a week, usually Saturday or Sunday. But, even with all that time I never could turn things around. What follows is a brief synopsis of the mistakes I made, so hopefully someone reading this doesn’t do the same thing. Good luck and good reading!

It started when I’d made an extremely last minute decision to go elk hunting in Montana for another season. I hadn’t pulled the trigger until the end of July and bought a left over tag with less than two months to go. It’s important to note that the ONLY season I had been successful was the year before. I’d spent roughly 7 months preparing through physical conditioning, constant almost daily practice with the bow, and developing a certain state of mind that wouldn’t let me fail. During that 7 week period in 2012, I went to the range as often as possible during my lunch hour. I also worked out in the mornings. With as much prep as I was going to get and with September upon us, I decided to go for it and hit the road.

Figure 2 “Photo” It was a long trip for my archery elk hunt !

With little prep time, I hadn’t been able to mentally prepare. Immediately, I was making rookie mistakes, walking too quickly and talking way too much. On my first day, my father-in-law and I worked our way towards the top of a knoll where we would drop off the other side and hunt for the day. Just before the top, Steve instantly smelled something. He kept saying, “I smell something, man it’s strong, elk, wow!” I couldn’t smell a thing, nada as I came down with a cold. Within a few feet it went from just a whiff to full blown rutting elk as though we were right on top of them and that’s when it happened!

Steve looked up and saw something moving through the trees. That big white rump and caramel colored body that can only be one thing, an elk! It was just ahead of us and large. No question this was a bull. We were down wind and from 50 yards away we could smell him easily. Well at least Steve could smell him easily. I immediately went for my video camera and then decided to forgo that in favor of my bow.

Figure 3 “Photo”  This is a picture of the bull, I should have used my bow, not my video camera.

Then instead, decided to go for one of my calls. Steve had an arrow knocked and we were standing right next to each other asking what we should do. Where is it? Is it coming back, etc…? Within a few minutes it was gone. We’d pushed too hard and walked too close to the bull. We were being too loud and didn’t have a plan for when we saw something. We also didn’t decide who was going to shoot first, which is often overlooked until it’s too late.

My second day, I bumped into another bull walking quickly and loudly, without looking more carefully around me. My third day of the season ended without any action. But, my fourth was the best of my entire 9-days spent in the woods. At about two o’clock in the afternoon, I was coming into the first of two drainage’s that seemed promising. As I looked up the drainage, sure enough two spike bulls were feeding. As I watched, I was trying to decide what to do. Do I go up the drainage and try to sneak up on them or do I sit and wait to see what they do? I froze and within seconds I realized they were moving, feeding down the drainage towards me.

Of course it would have been smart to back away from the drainage bottom and sit at the top edge as it’s so small. Instead, I sat there and just watched. A few minutes went by and pretty soon I had two spike bulls within 15 yards. As I drew back, they both stopped and just stared at me. I had one and I hesitated, questioning if this was what I wanted. A small bull, on the opposite side of the small mountain from my truck; and I had 5 days left to shoot the big one.

Figure 4 “Photo” The drainage where the action took place.

I didn’t want him, but I also didn’t want to go home with an unfilled tag. I was making a decision, I should have made days ago. As I’m trying to figure out what I was going to do, the bull started to move. I made a cow mew in the back of my throat and he stopped again. I half-heartedly took the shot burying my arrow into a lodge pole pine. The bulls spooked and both crossed to the opposite side of the drainage. I stopped them a couple times with a cow call before they disappeared forever! I continued to approach each situation like an amateur.

It was still early in the day, so I decided to walk into the next drainage. I sat for a while and waited for the elk to start moving. Not an hour later, I approached the second drainage, when I spotted another small bull behind a short pine. Something to my left caught my attention, as I sat down on the forest floor and brought my camera up to film this elk. I wanted to show all my family the footage of the elk. When I looked down into the shallow drainage, 40 yards directly in front me, all I could see was fur through a large hole in the trees. I couldn’t even tell which part of the elk I was looking at. Armed with my camera, I sat watching and waited. It all became clear when the elk turned toward me and I finally understood what I was looking at.

I immediately noticed the antler above his head moving between the trees. He was a magnificent 6-point with tall G-4s. Exactly the kind of bull I wanted and an awesome trophy, yet I still had my camera in my hands. Within a few minutes, the bull stopped watching me and went back to what he was doing. At this point, I should have ranged him and put an arrow through him behind his shoulder, knowing I’m accurate at that range. Instead, I put the camera down and decided to bugle to try and draw him out from behind those trees. HUGE MISTAKE! He immediately gave a bark to a small herd I never even noticed surrounding him in the bushes and disappeared. Bugling that close and to a bull is useless. He’d known all along there wasn’t another elk there, but he also didn’t realize I was there. I had a chance to put an arrow in him and I’d blown it.

I didn’t see much else until the last evening on my last day when I hunted the same drainage by myself. Without knowing it, I had quietly walked up to what must have been the exact same herd. Two spike bulls, and some cows milling around. What had to have been the same bull really starting to rut behind some tall, thick pines. I had walked right into them without knowing it and just froze. I tried to get closer, when I should have backed out and approached from above. After a while, the elk finally spooked and ended my season.

Figure 5 “Photo” A better picture of the elk wallow I was hunting.

Looking back I realized finding the elk was not hard for me the last couple of years. But, handling them once I’m in them has not been one of my specialties. I’ve hit the high points of what I had done wrong.

Here is a list of things to watch out for and hopefully you can be more successful then myself.

1. Extreme heat may have caused the elk to rut later than usual.
2. The moon cycle–the main week I hunted was a full moon and I think that impacted the elk.
3. Calling strategy close to bulls should only include cow calls. At 40 yards or closer you should be looking for a shooting lane and doing nothing else.
4. Walking quietly during spot and stalk hunting is very important, but so is keeping your eyes open to prevent the issues I had.
5. Take the time to practice and build crucial confidence in your equipment and yourself.
6. Know who is going to shoot and what you are willing to harvest ahead of time.

Good luck with your hunting, I hope my experience can help you harvest a bull of your dreams !