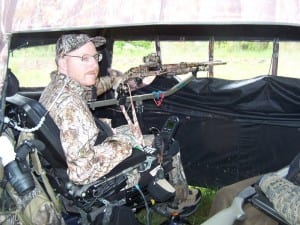 My name is Greg Traynor and I am a person with a disability. In 1999, I broke my neck at the C4/C5 vertebrae and became paralyzed from the chest down in a diving accident. I use an adapted gun brace and adapted crank trigger for hunting. I have limited arm movement and I am unable to use my hands or fingers.

In May 2011, I had the privilege to go turkey hunting with two real professional hunters, Guy Hostutler, President of Pioneer Quest Game Calls and Chris Gillin, CEO of Dreams Become Reality. My brother John and I met Chris at 4 a.m. and followed him to a property near Waynesburg, Pennsylvania. There we met Guy for the first time.

Chris transferred me from my Permobil C-500 wheelchair onto a mule and loaded my power wheelchair onto another mule. Hunting blinds, cameras and my Mossberg shotgun followed as we started up the mountain.

It was a short ride to the hunting area. Once we arrived, Chris transferred me into my power chair and set up my gun brace. They also set up two Primos ground blinds, one for Chris and I and another for Guy and John. Several turkey decoys were deployed and Guy began calling.

I am no stranger to turkey calling. I can do a little bit of it myself and have heard friends call in many turkeys over the years. But let me tell you, Guy is hands-down, absolutely the best turkey caller I have ever heard in my life.

As the sun came up and the fog began to lift, I watched two white tail deer cross the saddle about 100 yards away. It wasn’t very long before Chris spotted the first turkey coming to the decoys and Guy’s yelps.

Chris was able to use the video camera to watch it approach and as it got closer and closer we looked for a beard, but it was a single hen. It approached the ground blind at a distance of 5 yards, close enough to count the feathers!  If it were a gobbler, I could have easily taken that bird.

The hen stayed with our decoys for several minutes before moving on. About an hour later a Jake made an appearance, but I could not get a bead on him the way my shotgun was pointing. Even though he stood 25 yards to my left, I could not maneuver my wheelchair for a clean shot. My heart was racing at this point!

As the sun rose, the temperature in the ground blind went up also. Another Jake made his approach but hung up at 45 yards. Using the camera once again we could tell it was a young Jake. I decided to take the shot as he began to walk away and I could only see his head. As my shotgun went off, I was hoping for a quick, clean kill. But it was not meant to be and I missed.

I had so much fun with Guy, Chris and John, it did not matter that I did not take a bird that day. I enjoyed myself immensely and made two new friends in the hunting community. I had not hunted turkey since 1998 and it felt great to be back in the woods trying to fool a mature Tom. My trophy was bagged the minute my van door opened.

It was such a pleasure watching these professional hunters in action. They cared enough to take the time to make sure I had the best hunting experience possible. Thank you so much Guy and Chris, I really appreciate how much preparation and hard work went into planning this hunt, so that I would have a shot at a turkey. I cannot wait to do it again!

Today in 2012, I have the ActionTrack, a wheelchair made for the great outdoors. I ordered one in June 2011. It makes the ride to the ground blind easier and a lot more fun. Good luck and enjoy the outdoors!

Check out the 2012 hunting story coming in two weeks!