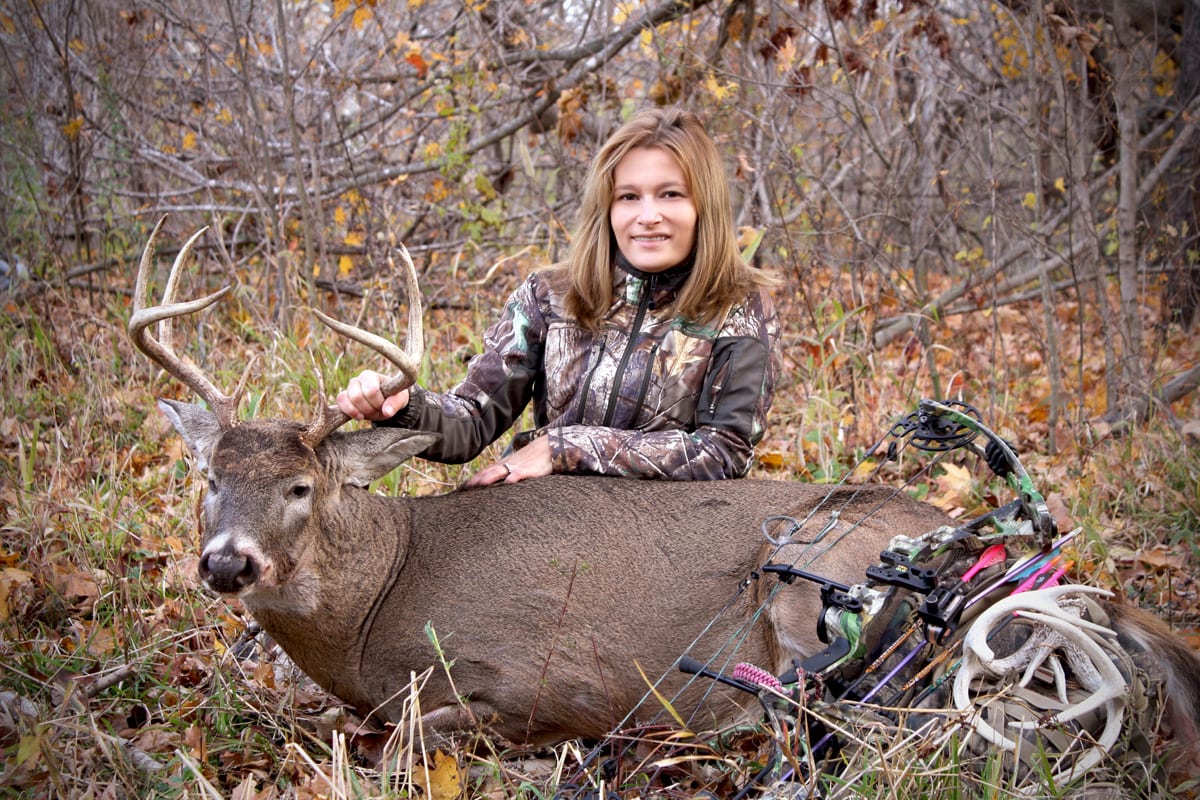 After the first 3 weeks of early archery season in Indiana, I started to wonder if this would be another disappointing year. My stand was set up on a few hundred acres of field. There was a small, 10 acre strip of woods that ran the entire property from north to south between the corn and soybeans. After logging the previous year, the undergrowth was thick, primarily small saplings and Multiflora Rose.

Earlier in season, there were deer paths mowed down to dirt through the entire property. Looking down from my stand, there were no signs of life. My trail camera had produced two images again. Most likely, the doe and fawn that I had seen on a regular basis, but they never gave me an opportunity at a shot. They were the same ones that I kicked up on the way to my stand. Nevertheless, I had come prepared this evening. I brought my Darton, a grunt call, and a pair of rattling antlers that I cut off of a skull I had found a few springs ago. I decided earlier that day that I was going to change my approach. Instead of hunting for a doe, I was going to hunt for antlers. Our pre-rut was heating up, and I was hoping that the bucks would be cruising.

A few weeks earlier I had a few nice photos of some bucks that were in the area. But they were all night images. The prospect of a buck moving during the day, so early in the year, was something that we all dream about. But it is that “Hope for the best, and expect the worst” mentality that said, “Not today.” Still, I had hopes of rattling and coaxing something with antlers to get up early.

Figure 1 “Photo” A game camera image that Lindsay had recovered of her buck earlier in the year.

Around 5 pm, I had a group of three does come in south of my stand and skirt the creek that runs beside me. They never came closer than sixty yards, well out of my shooting range. I grunted a few times to see if I could spark their curiosity enough to come closer. One doe stopped dead in her tracks and started coming closer. She only made it ten steps before she decided that call wasn’t convincing enough to warrant any further investigation.

Around 6 pm, I rattled a few times and let out a series of grunts. 6:07 pm, I had three fawns come in. Maybe this wasn’t the time to be picky about a buck? Instead, I decided to focus on a nearly empty freezer. They were behind some brush, so I took that opportunity to stand up and nock an arrow. Over the next few seconds, they skirted the creek bed and came out just a few yards in front of me. Suddenly, as I prepared myself to draw, I heard some noise behind me which also caught the attention of the fawns. I was hesitant to try to get a closer look for fear that I might lose the opportunity at a shot on one of the fawns. But the sound wasn’t stopping, in fact, it was headed right toward me and moving quickly.

The fawns were looking nervous by this time, when they turned away from me. I took a quick look and saw a buck coming in. I knew I wouldn’t have a lot of time to decide whether or not he was what I wanted to fill my tag with. Instinct told me he was coming in for a fight, which meant the fawns would run off.

I decided to hold off on the fawns, hoping the buck would come closer to my stand. This would give me a few more seconds to get a better look at him. He came in with his head to the ground. I’m sure he was looking for a fight, and had probably heard the rattling from a good ways away. He had what looked to be a decent rack and his body was huge. He walked directly under my platform and started walking directly away from me. In what seemed like an eternity, but was really a few seconds, he turned. He was now standing slightly quartering away. I drew the bow, took a deep breath and released as I exhaled.

Like slow motion, he made a long grunt, and I could see a well placed shot with my arrow hanging out a few inches. Then he took off running with the sound of breaking branches echoing through the woods. In a second, the woods turned silent. He had hit the open field, and I was listening now, hoping he would come back into the woods. Maybe he would head back to where he had come from. I was hoping that he wouldn’t cross the huge cornfield to the even larger wooded property on the other side. I was shaking so much that I had to sit down now.

I sat there for twenty minutes questioning my shot. I wondered whether I should go look while I still had light. Or, should I wait it out so as not to kick him up again? That was when panic truly set in and I called my husband. There was no answer on his cell phone. I was so excited that I just kept calling everywhere that I thought he might be. I called anyone that might be able to lend me a bit of reassurance. Finally, I called my cousin who offered to head to the house to find Wes, and watch the girls while we looked for, and hopefully recovered, my buck. Just a few seconds later, Wes called back. I told him about the shot, and he had little to say that helped my nerves.

It was getting dark and I really needed to get down. I just wanted to find the start of his blood trail. I climbed down and walked the path that he had run. I did not find anything! I walked to the field and still did not find any blood! The darkness came on so fast and so did the nausea. I heard footsteps finally and saw a flashlight. Had I failed to bring a flashlight with me to the treestand on this particular hunt?

We walked around and followed the path from where the arrow hit the buck to the field. I saw one drop of blood finally. I took a few more steps and saw another drop, then another. One more and then – nothing! That is when I really started to wonder. How could something with an arrow passing through its body and an inch long cut in its side not be bleeding? We continued walking through the cornfield, tripping on corn stubble the whole way.

It felt hopeless! It was now 7pm and fifty minutes after I had taken the shot. Wes kept mentioning that coming back in the morning might be a good idea. I felt like the least I could do was keep looking until I found him, even if that meant being out all night. He told me not to worry about leaving him overnight and we would come at first light. I agreed, but only if I could walk through the woods back to the truck. I was hoping that he had turned back into the woods.

After walking for what seemed like hours, my flashlight caught a glimpse of something that didn’t quite belong in the dark woods. My heart leapt back into my throat! I took a few more steps. I could see white now. My eyes were not fooling me. It was a big white belly. A few more steps allowed me to see three large puddles of blood as I worked my way to him. I yelled for Wes and we backtracked and never found another drop of blood. We figured he must have run full speed the entire 100 yards and then just cut into the weeds to lie down.

All of the panic and negativity had turned to excitement. My first archery buck was lying in front of me. He had eight points with a small sticker off of his base. He weighed 220 lbs live weight, with an excellent layer of fat. He will provide an excellent amount of meat for our family this year.

Figure 3 “Photo” Lindsay Schmeltz with her 2011 Indiana archery buck that weighed in at a wopping 220 lbs.

It has been a long year of ups and downs. The countless trips back and forth to that same treestand had dulled my nerves toward the possibility of seeing a buck so early in the season. But that is hunting! And that is why I love it so much. Once again, I had put on my camouflage and made the treck to the stand. This time with the rattling horns and the grunt call. I had raised the bar and challenged that buck to come and see what was in his woods making all that noise. He responded like I had hoped, like I had planned he would.

After months of shooting, planning, scouting, talking and listening to the stories of other hunters, I had my buck. The end of another great year in Indiana. I can’t wait for next year!!