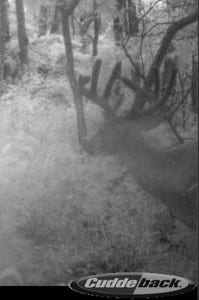 My name is Austin Young. Hunting has always been a huge passion and obsession for me, beginning around the age of six. I have been hunting for almost 10 years now and am about to turn sixteen. Although I could talk about fifty or more hunting encounters, my proudest moment as a hunter was during the fall of 2012. I took a beautiful nine-point whitetail on a large piece of farm property located close by, just behind my house in southwestern Pennsylvania.

It was a rainy evening on October 31, 2012. We were still experiencing some of the aftermath of Hurricane Sandy. It had rained steady all week and by Wednesday it had not let up. As I rode the bus home after school, the rain was coming down hard. I sent my dad a quick text, asking if he could give me a ride to the top of the hill. I did not have much time left to hunt that day, considering the time change. He of course said yes, and I continued home.

Upon arriving, I quickly ran around the house, put on my camo, grabbed my bow and quiver, got my climber and was out the door. Dad drove me about 200 yards from a tree I had in mind. I had hunted about 100 yards from this spot the past two weekends and always saw deer down in the corner of this old hay field. Dad walked me down to the corner of the field, watched as I climbed the tree in the pouring rain with my lone wolf, and then proceeded home. As I pulled my bow up and got settled in, I did a quick scan of the field and woods. I turned around and was surprised by the view, tines sticking up out of the brush about seventy yards away. I quickly hit my grunt tube and watched as this buck raised his head and gave me a view of his rack. My heart started pumping! This was the buck that I had got on trail camera in July. I had dreamt about killing him for three months. In fact, this buck was the screensaver on my phone.

Figure 1 “Photo” Austin’s trail camera picture of the buck he was hunting in 2012.

The mature buck worked his way down the edge of the woods. Within 15 minutes, he had worked his way 20-25 yards in front of me. I did not have much cover. I knew that I would have to draw my bow the minute the buck stepped behind the big hickory tree in front of me. Before I knew it, he stepped behind that tree. I drew my diamond bow back and waited for him to step out. Unexpectedly he turned around, presenting a shot through the tight split in the tree trunk. I squeezed my release and watched the arrow nail the buck right behind the front shoulder. I could hardly contain my excitement! I knew that buck was dead. I got on the phone and called my dad. I struggled to dial, I was shaking so profusely. I told him to meet up with me at my tree in a half hour and that I had “just smoked a big one!”

It was still raining. By the time my dad arrived, the blood trail was nearly washed away. We recovered the arrow, and followed the little bit of blood we could see. The trail was so diminished that we actually split up at one point. I walked about eighty yards and saw my buck laying there. I called my pap that lives in a house located on our property. He was going on his seventh year of living with bone cancer, and was having trouble even hunting. I had watched him go downhill with each year, which had not been easy. He got on his ATV and drove up to my Dad and I standing with my buck. To have him beside me gripping the horns of that buck meant the world to me. I thanked God for allowing me to share that moment with him and for sending me that gorgeous nine- point lying at my feet. What more could I have asked for on that rainy Halloween night of 2012. It was a night I will never forget. As the years go on, I hope to continue to harvest a large number of animals and build memories with friends and family.

Figure 3 “Photo” Austin Young and his Grandfather. This memory will last a lifetime.