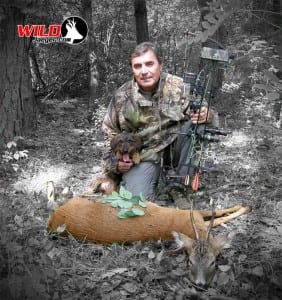 Although the Hungarian nation is traditionally an archery-nation, modern archery hunting is only 13 years old in our country. Only 5-10% of the Hungarian hunters use a bow for hunting purposes, which is no more than 3,000-5,000 people. If you want to hunt with a bow, in addition to the hunting license, it is required that you pass an archery hunting examination which includes a theoretical and a practical part.

There is still revulsion towards archery hunters that is rooted in the lack of knowledge about archery hunting itself. Most of the “normal” hunters think that an archer is wounding a lot more than a hunter with a rifle, just to give an example. If you take a look at archery hunting from the side of the hosting company or hunting group, it is much harder to get an animal with a bow than it is for a hunter with a gun. An archer needs more time, special hunting devices and even the terrain must be special to organize a successful archery hunt.

If we look at the rich livestock of game in Hungary, this country is certainly a very alluring destination for archery hunters of any nation. The Hungarian hunting organizers know this, that’s why the number of territories are growing where an archer is welcomed and the host can guarantee a successful hunt.

The most important game in our country is the Hungarian “big five”: red deer, fallow deer, roe deer, mouflon and wild boar. It is indeed possible to hunt these animals with the bow, although you need to know some basic facts about hunting them.

Red deer: To get a stag, the best time is the rut, which takes place in September. During this period, the stags are moving a lot, and there is a possibility to call them. A good way to do this is to stay in a tree stand with a bow and call the stag. You will have an opportunity to get him into shooting range. The population of red deer is very big in Hungary. In the wintertime, it isn’t hard to harvest a hind or a calf. The season for red deer stag opens on 1 September and ends on 31 October. You can hunt for hind and calf till 28 February.

Fallow deer: Bowhunting of a fallow deer is nearly the same as that of red deer, but the rut is in October. There are huge populations of Fallow deer in the south-western part of the country (districts Somogy, Tolna and Baranya). The season for fallow stag starts on October 1 and ends December 31.

Figure 1 “Photo” Fallow Deer taken with a bow by László Hefter in Hungary.

Mouflon: Although mouflon isn’t autochthonic in Hungary, you can find plenty of them in the mountains of Bükk and Mátra (north-east part of the country, districts Heves, Nógrád and Borsod). The living-space of the mouflon is always a mountain territory. You need a good “Kirrung” (feeding place) with a tree stand to have a successful hunt for mouflon. The season for mouflon opens on 1 September and ends on 31 February.

Roe deer: The roe deer are the most common game found in every corner of the country. If you want to get a buck with high SCI-points you need to visit the plain land. (Great Lowland is a huge plain territory stretching from the river Danube to the eastern borders). It is very hard to get a good buck in the plain lands. You have no cover, not even a tree or a bush. That’s why I recommend visiting an area, where the bucks aren’t that huge, but there is more chance for a bow hunter to get a good buck. The season for roe deer opens on 15 April and ends on 30 September.

Wild boar: We have a lot of wild boar all around the country. But, it is the most difficult species to hunt with a bow. Originally the wild boar was an animal that was active during daytime hours. Due to population growth, it has turned to into an animal that is more nocturnal. This makes it very hard to get a wild boar in the daytime. Even if you are sitting on a good “Kirrung” (feeding place), it isn’t guaranteed that you will see them in shooting light. That’s the reason why a lot of Hungarian bow hunters use a lamp. You need even more practice to hunt successful with a lamp on your bow. In the summertime, the game is causing a lot of damage to the agriculture. You will surely have an opportunity to take a shot on a wild boar in a cornfield. Wild boar can be hunted all year, but most of the territories use limitations for hunting sow.

I also have to mention bow hunting of small game in Hungary. Nowadays the archer clubs are organizing driven hare hunts. These hunts are great fun, but you can only attend them with a traditional bow. We are also hunting winged game with the bow, mostly pheasant.

If you are a bow hunter and you want to visit a country with a rich live-stock of game, definitely take a trip to Hungary!