Bowhunting on the Alandic Islands 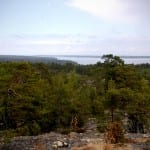 Aland (Åland) is a small autonomous region situated in the Baltic Sea between Finland and Sweden with approximately 26,000 people, 30% are hunters. Aland is a part of Finland, but we consider ourselves “Alandics” rather than Finnish. Both hunting and fishing are a great part of our traditions. We have fairly liberal hunting regulations, even though we basically are governed by Finnish laws. We have our own local regulations when it comes to hunting.

Figure 1 “Photo” Picture of the scenic view from the Island of Aland.

In Finland, Bowhunting has never really been prohibited and is rather poorly regulated. No special permits or education is required to bow hunt, except needing a hunting permit of course. The bow is not classified as a weapon, therefore you do not need weapons permit/license. You can buy a bow without applying for one. The minimum requirements are 40 lbs of draw weight and 22mm cutting diameter for the broad heads. Smaller game can be harvested with the bow up to Roe deer. Currently the Finnish Bowhunting Association is working on legalizing hunting white tail deer as well, since the white tail deer population is greater than the Roe deer. Bowhunting beavers is also popular among Finnish bowhunters , but it requires the use of bow fishing equipment by law.

Figure 2 “Photo” A successful Archer in Finland with 2 Roe deer does that he harvested.

Until 2007, Bow hunting was illegal. After 3 years of hard work, the

Alandic Bowhunting Association <http://www.aba.ax/> successfully convinced the Alandic government that it is a very good method of hunting. Since then we have been allowed to bowhunt.

To hunt in Aland, there are a few things you will need, that are listed below.

1. A valid Alandic hunting permit. To obtain one, you will need a valid hunter’s education certificate from your country.

3. Any bow i.e. Compound, recurve or long bow are accepted provided (Crossbows are not allowed!!).

4. The arrows minimum weight is 25 grams

5. The cutting diameter of the broad head is at least 25 millimeters (no blunts or judo points)

6. The arrow must produce at least 40 joules of kinetic energy

7. Approved local proficiency test, of 6 3D targets at an unknown distance for the shooter. You need to score 5 approved hits.

We can hunt all available game including white tail deer but not moose. Because of political issues and the way they are hunted, moose are excluded from Bowhunting.

Roe deer is the main game that bowhunters target. There is a large population of Roe deer, even though Aland is a “small” place. The white tail population is fairly good out in the archipelago islands, while on the main island they are scarce. Hunting white tails in the archipelago is a challenge for any experienced hunter. The topography which is almost tundra like offers little cover. The animals can be scattered over many small islands which makes recon very difficult, but necessary in order to be successful.  So far no white tails have been harvested with a bow and arrow here, but I am working hard to change that!

Other game frequently taken with bow and arrow are raccoon dogs and red foxes. The latter is actually more difficult than hunting Roe deer, mainly because of the keen hearing the red fox has. To harvest an adult red fox you can’t afford to make any sound, or you will not even see them, though there are plenty around. Raccoon dogs are a big problem here, and they do not belong to the Alandic fauna. They came to Aland from Russia, where they were breed for fur production. Many have escaped and given the nature of this animal, they have an extra ordinary way of establishing themselves. For over 15 years, raccoon dogs have virtually eliminated woodland foul (ground nesters) to the point where we rarely see any. They also take young hare which used to be very common. In a way they are competing with red foxes and eagles for the same pray.

There are a few outfitters that provide Bowhunting, I am one of them. The level of experience among the outfitters varies. I have worked with some of them to provide good Bowhunting on their land.  Aland is traditionally a rifle hunting community which is reflected in the knowledge among the outfitters here. That is why it’s important that I help to arrange any bowhunts and help to make the hunt successful.

Hunting season for Roe deer bucks begins August 15th. The general season starts September 1st. During the August rut the Roe deer are very active and bucks can be called on. They are active 24/7 but due to the fading light during that time of year, 11 pm is usually the time when we stop hunting. Aland does not have any regulations on hours you can hunt. Common sense tells you, it’s time to go home when you can’t see your feet due to darkness. No artificial lights can be used while hunting!

The first week of September is also a good time to hunt Roe deer. It slows down the 3 remaining weeks in September and picks up again in October. I believe there are several reasons for the slow period. First, the rut is over and the bucks aren’t pushing the animals around as much, they are simply exhausted. The Roe deer need to eat food they only find in the wooded areas seasonally. For example mushrooms and their primary food source blue berry bushes. They need to feed on the leaves before they turn brown and fall away which happens in October.

Roe deer are very picky eaters, and also need many different kinds of food and herbs. Clover flowers are something they tend to seek out. They do not seem to feed on grass as much as one would think, since you see them in fields a lot. I have studied what they actually eat, and see they pick flowers rather than straight grass. Toward the end of October, beginning of November they seek sugar rich feed. They focus on wild apples which after a few night of frost accumulate a lot of sugar. Roe deer need sugar rich feed in order to build fat for the coming winter. This is a good time to put apples and potatoes out by your stands, provided of course there has been a frost. The frost/freezing of the apples and potatoes is what starts the sugar production.

The season ends December 30th but one can still hunt red foxes and hare. The raccoon dogs are a semi hibernating animal and depending on the amount of snow they can still be hunted/seen.  The White tail season starts October 10th and ends December 30th.

Aland offers a beautiful hunting experience and also a challenging one. Bowhunting here demands a skilled and patient hunter for sure. But you will be rewarded with a lovely experience, that much I can promise you.

Figure 4 “Photo” The author, Roger Petterson, in the treestand and archery hunting.