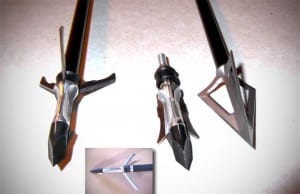 For years now, there has been a battle over which broadheads work the best, fixed blade or mechanical heads. With all the broadheads on the market today, there are 3 important questions you should be asking.

Do they get good penetration?

I have been bow hunting for about 20 years. And in that time, I have tried a lot of both mechanical and fixed broadheads. There are thousands of broadheads on the market. Regardless, of whether it’s the hunt of a lifetime or your very first game animal with archery; it all comes down to what you prefer to shoot or spend your hard earned money on.

Mechanical heads are nice. The ones that Rage make for example, leave a tremendous entry wound. But, how many times have you had a full pass through? Or hit a bone? Or they do not fully deploy? When they first came out, I thought they were the best thing going. I shot black bear with them and was very impressed. After I shot whitetail and only found three out of five, I was not real impressed and neither was my check book. Rage heads are expensive!

Most of the mechanical blades on the market deploy front to back. If you have a quartering away shot or you shoot too far back, the blades may not open and I have seen it happen first hand.

In 2008, I bought a brand of broadheads whose name will remain anonymous. I had a buck at 25 yards broadside and made what I thought was a great shot. The buck ran off about 40 yards and went down. I gave him about half an hour and he never moved. I got down, out of the treestand and went to put my hands on him. To my disbelief, he jumped up and took off over the hill. I went back to investigate how this even happened. From the point where I shot him to where he laid down, I retrieved my arrow and saw that the broad head never opened. So that brand will never be bought ever again.

Mechanical heads have come a long way since they first came out. But, you still can’t beat a fixed blade cut on contact head in my opinion.

If you do not achieve a pass through with a fixed blade head, you will still have a blood trail to follow. The fixed blade will still cut and do internal damage, as opposed to where a mechanical broadhead may or may not.

Over the years I have shot several different broadheads. One thing that I have learned is that, if you make a well placed shot, you will find your deer or game animal using most broadheads on the market almost every time.

After losing that buck, I switched to fixed blade broadheads using Muzzy MX3s on my compound and MX4s on my crossbow. Using Muzzy broadheads, I had to tune my bow. Once it was sighted in and tuned, they shot great and left a good entry and exit wound, creating great blood trails.

Muzzy with its trocar tip is a hard hitting bone crusher head. They are very dependable and will not break your wallet. The only down fall I have with them is, they want to pull left from my bow. Why that happens, I have no idea. You can buy a six pack of Muzzy’s for the same price as a three pack of Rage and the replacement blades are cheaper on the Muzzy side.

In theory, it all is based on what you prefer to shoot. If you ask 20 different people, it is highly unlikely you will get the same answer from everyone on what they shoot.

Mark started hunting with a crossbow several years ago and his Canadian friends advised him to try Grim Reaper broadheads. Back then, they didn’t have a crossbow, only broadheads, so we bought the bow version. 100 grain whitetail special’s, with a 2″cutting diameter. During that time, he had a Parker Buck Buster 150lbs crossbow.

The company Grim Reaper has a certain way of promoting their products. But, Mark didn’t trust their word; he wanted to be able to see the results for himself. So he tried the Grim Reaper broadheads out and found that the company was right! The first deer he shot was down and the exit wound was amazing. A clean pass through and the deer walked 40 yards till she dropped. The broadhead passed through and was stuck in the ground at least 6 inches.

On his next three hunting trips, Mark shot three more deer with these broadheads. One was a spine shot and it was almost through the back bone, what cutting power!

This past year, he bought a new crossbow, because he had some problems with his compound crossbow. The cable slide came out and there were some other issues too. It was time to step up to another level in the crossbow world.

The Excalibur became Mark’s choice. He bought an Excalibur Exocet 200 lb crossbow. This is the absolute top of the line crossbow in the recurve crossbow market, in Mark’s opinion. There are a few reasons why he bought this crossbow. There are fewer parts that can break and he can change a bow string in a minute. And all the parts Mark can replace himself while hunting.

If something brakes down on other crossbows, like a bowstring, during the hunt, your hunt is over. There are no bow shops in his neighborhood, so this bow is easier to maintain. This bow is also way more powerful than his old compound.

Over the years, Grim Reaper has developed the crossbow broadhead, which is also a mechanical broad head. There are as many believers in mechanical broadheads as there are people who don’t like them.

Mark knows one thing for sure; all his shots with Grim Reaper broadheads have been kill shots and the blood trails are amazing. He shoots now with the crossbow heads. His new bow has a lot more power, so the blades stay closed during flight. They fly like a field tip.

His arrows are always Lumen arrows from Lumenok. He has fixed broad heads as well. They are Muzzy 125 grain three blade heads. The nice thing about his Muzzy heads is that they can’t come apart so there isn’t a broken broadhead any more or an open mechanical before the shot.

Broadheads are illegal to have in Holland where Mark resides. And bow hunting is still not allowed in the Netherlands. So his Grim reapers will have to stay behind in Canada with friends, awaiting his next hunting trip.

What broadheads do you shoot and why? We would love to here about your thoughts on this topic!