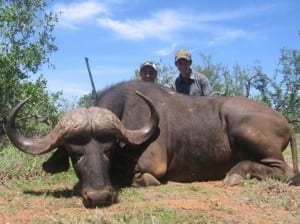 The African Cape Buffalo is one of the biggest of the Big 5 dangerous animals in Africa along with the Elephant, Lion, Leopard and Rhinoceros. The Cape Buffalo is known for killing several people each year. This animal is distinctive by the dark color of its hide. Its hair is sparsely distributed on the body, with thick broad shoulders and neck. The buffalo can weigh up to nearly 2,000 pounds.

Figure 1 “Photo” The Cape Buffalo – Known as the Black Death in the Dark Continent these African Bovine are one of the Big 5’s most dangerous species to pursue, tough skinned and short tempered, you want to pack enough gun and be able to shoot it accurately to make sure you get it done right the first shot.

There are two subspecies of the Cape Buffalo and the smaller of the two is located near areas where there is more vegetation. The only area where you can see these magnificent animals in their natural habitat is in Africa. Both male and female have horns that grow over the life of the animal.

Status: Not on Endangered list. High conservation efforts being made throughout Africa through management programs have kept this wild game’s numbers high.

Natural Predators: Humans and Lions are the only predators to this massive animal, though Hyenas, Cheetahs and Leopards have been known to prey on smaller calves or weaker buffalo.

Future: Maintaining natural habitat for this animal is a priority issue for management. The expansion of civilization and domestic cattle farming has pressured this game and increased the introduction of some foreign diseases to some of the herds.

Rifles: Most hunters have used a solid bolt action rifle, even though double barrels and single barrel rifles are still out there, there is that possibility you might need a quick follow up shot.

Optics: Quality and highly reliable when it comes to scope optics, know your equipment, if you know how it works with the loads and you know where you bullets are hitting, then stick to it, ensure recoil proof for big guns.

Notes: African PH recommend that you are very familiar with your rifle and be able to shoot it accurately supported and off hand, and know your bullet and rifle capabilities before going on a buffalo hunt.

Method: Stalking to a preferred shooting range or other methods directed by your guide, habitat and thick vegetation will be a factor.