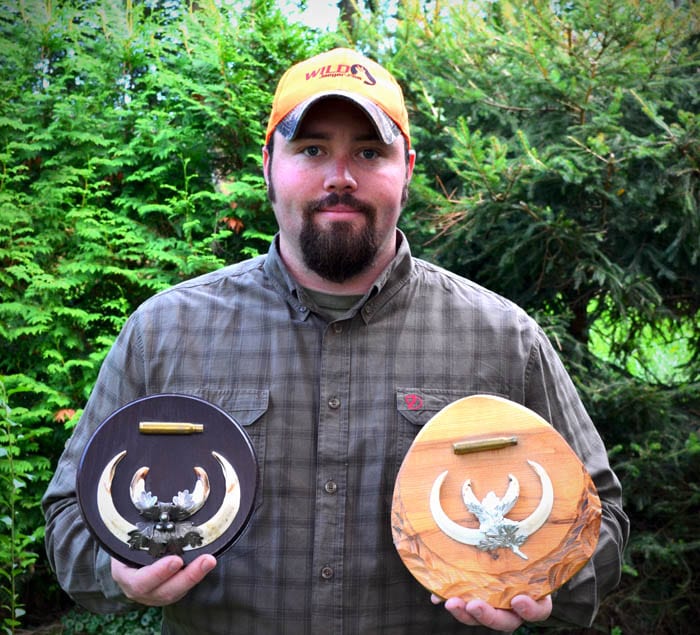 The Wild Boar (Sus scrofa) also known as the wild pig, is a species of the pig genus Sus, part of the Suidae family. Wild boars are native across much of Northern and Central Europe. They have been introduced into many other countries stretching from Asia to the Americas. They were artificially introduced in America for hunting and farming purposes. The term boar is used to distinguish the large male pig which includes domestic pigs. However, the term wild boar is used for all sexes.

All over the world, wild boars have different names. They are called wild hogs, razorbacks (because of the large hairs that stick up on their back when they’re agitated), European boar (because of the native location) and Wildschwein (the German word for wild boar) or as we say down South “hogs”.

While almost every European wild boar will have long black wire like hair in the winter, they shed 80% or so of that for the summer months. Some of the smaller wild boars call Frischling (German for under one year old) will keep most of their hair throughout the year. Some wild boars in Europe and around the world have been accidentally bred with domestic hogs. This can lead to pigs with mixed colors or checkered colored pigs. The checkered pigs in Europe are very rare and a somewhat sought after trophy. Some say it’s a 1 in a 100,000 shot if you have the luck to harvest one.

It’s very hard to tell at first glimpse if the wild boar is male or female. Some of the differences can be very hard to see to the untrained eye. One of the easiest ways to tell if it’s a Sow (female or Bache in German) or Boar (male or Keiler in German) is what’s on the underside. But, don’t confuse the milk bags with the large group of hair the male has (Pensil in German). There are numerous other ways to tell the sex. But, since these animals are mainly hunted at night in most countries (mainly Europe) it makes telling the sex very difficult at times. The male, once matured, will have a wide deep chest, a short wider snout with usually a large hump in the middle (where the upper tusks roll out), and a somewhat smaller rear end. The female will have a long slender snout with a squared off body. Their average body weight ranges from 50-90 kg (110-200 lbs). But, they have been known to get up well over 250 kg in some parts of the world. Their average length ranges from 90-190 cm (35-76 inches).

Most males are solitary until mid-autumn, when their testosterone production is at its peak. Then they will typically move into groups (Rotte in German) for breeding purposes. The males will fight for dominance, with the most dominant winning more mating rights. Wild boar can have up to 12 piglets but typically they have 4-6 piglets per litter. Usually the female will only have 1-3 piglets per litter. Most of the time, their puberty ranges from 8 to 24 months, but they have been known to be able to breed and drop piglets at 6 months. Most piglets weigh in at 1000 g (2.2 lbs) at birth. Depending on the time of the year when the litters drop, a hard winter can kill off some if not all of the piglets.

In most parts of Europe wild boar have few natural predators once they are a year old. For the piglets however, it’s a long road to adulthood. The fox or Fuchs in German is a piglet’s number one predator. In other locations throughout the world, they have other predators like wolves, bears, alligators, snakes and even other wild boar.

Wild boars thrive in a wet, hot environment surrounded by heavy thickets and briars. But, they have made residence throughout Europe where temperatures can easily reach -15C. Their dense layer of fat mixed with a heavy thick outer coat of wiry hair keeps them warm enough to survive in most cold weather climates. They will eat virtually anything which allows them to proliferate in practically all environments short of the desert and Arctic regions.

Harvesting this delicious game can be more difficult than others in some parts of the world. Wild Boar are originally active during daylight, hunting has caused them to become nocturnal. There are a few ways to hunt boars, from a stand, stalking and most commonly in Europe, driven from a given area. A driven hunt is where a number of beaters and dog handlers walk thru a given piece of property and drive the game towards hunters on the other side awaiting the animals. It’s a somewhat dangerous way to hunt wild boar. But, given a well organized and disciplined group of hunters this can and is the most effective way to harvest large amounts of wild boar.

Figure 2 “Photo” Chris Norris and the great Wild Boar he was able to harvest recently.

Wild boars are very tough animals. Because of this, most countries (mainly Europe) require a certain diameter of round that meets a certain energy level at 100 meters to hunt large game with it. For example, in Germany the bullet has to be at least 6.5 mm and have 2000 joules at 100 meters to hunt large game with. A further example of this is the .243 Winchester which meets the joule requirement but doesn’t meet the diameter requirement. The reasoning behind this is that shooting a boar in the shoulder can leave that animal wounded, if you don’t have enough bullet-energy to get through the shoulder plate that is built like a piece of body armor. Then the hunter’s round may not make it into the vitals for a clean kill. Due to the caliber/joule restriction, some of the most common calibers are the .308 Winchester, .30-06 Springfield, 7X64 Brenneke and the powerful 9,3X62 Mauser. These are just a couple of the more popular rounds.

In general, since 90% of all boar are taken within 100 meters, a very hard hitting round that causes a lot of hydrostatic shock will work the best (like the 9,3X62). I’ve known hunters in American to use a .222 Remington for boar hunting, but I would not recommend it. Hunters, as conservationists, need to use a proper round that will put the boar on the ground in the most humane way. Due to the strength of these animals, that can be hard enough to do without an improper cartridge selection. A misplaced round with a .222 will send a boar running so that few tracking dogs on earth would have the energy to follow. Not to mention, that a wounded boar can be very dangerous to the hunter/dog/tracker as well.

If you find yourself in a tracking situation, please keep in mind that when wounded, the animal will go for very thick cover, water and/or mud. They try to use the mud by bedding down and clotting the wound, then hit the heavy thickets to rest and regain their energy. The mud and water will cool their fevered bodies also! With that said, when you track these animals, make sure you have proper clothing and weaponry with you. Heavy pants and gloves will suffice for the thickets, a good pair of water proof boots (insulated if in the winter) and a short, quick handling firearm with plenty of energy. I’ve been on well over 40 boar tracking scenarios (nachsuche in German) and my weapon of choice is the 450 Marlin Magnum with a 350 grain bonded bullet. It’s very short for good handling in the thickets with plenty of power to push that chunk of lead thru the brush and into the animal, if needed without getting to close to the wounded animal and getting hurt. Please use caution when shooting into the brush and know your surroundings and make sure you have an appropriate back stop for the round.

If you have the luck to harvest a very large male, there are two trophies to be had from the animal. First are their tusks (Waffen in German). A boar’s tusks only stick out of their gums 1/4 to a 1/3 of the entire length. Once tusks are removed from the jaw bone, they make for a very impressive wall mount. The other is the hair on their back (Saubart in German). The Saubart can make for a very decorative trophy for your hunting hat (Jagdhood in German) once the long hairs on the back have been removed and placed in a decorative silver holder or leather wrap.

Figure 4 “Photo” the tools of the trade with Chris Norris’s best friend.

Although wild boar meat is very tasty and has very little in common with the white, pale meat from its domesticated cousin, the nature of a boar’s habitat makes it susceptible to diseases. Some countries have put laws into affect to help prevent the spread of any of these diseases to humans. For example, all wild boar meat in Germany must be tested by a licensed veterinary service before it can be consumed by humans. Usually a small piece of muscle flesh, a blood sample, as well as an internal organ sample is forwarded to a testing facility. These internal organ samples can be a piece of the diaphragm, a tonsil, or even a piece of the pancreas. Check with your local authorities to see exactly what is required in the area you are hunting, as it differs greatly by region. Wild boar meat is tested for Swine Fever (schweinepest or pig fever) and Trichinosis and for Cesium 236 (radiation poisoning from the Russian atomic power plant Chernobyl). Radiation from this accident is still prevalent in certain parts of Germany. Although it has seeped into the ground, this radiation becomes part of the boar’s diet when they eat mushrooms, worms and other roots that are high in radiation.

Wild boar properly cooked, can be some of the best game meat you have ever put on your plate. Just keep in mind not to use any salt until the meat is almost completely cooked.

Below is one of my favorite recipes (Chris Norris) . Bon Appétit!

*Marinade the meat in the above ingredients for at least 6 hours prior to cooking (Keeping it cool the whole time). I marinade mine for a minimum of 24 hours in the fridge.

To roast the wild boar:

* Try not to spill sauce from inside the aluminum foil. You will need it for your cream sauce.

*Mix all sauce ingredients and pour over meat to your liking