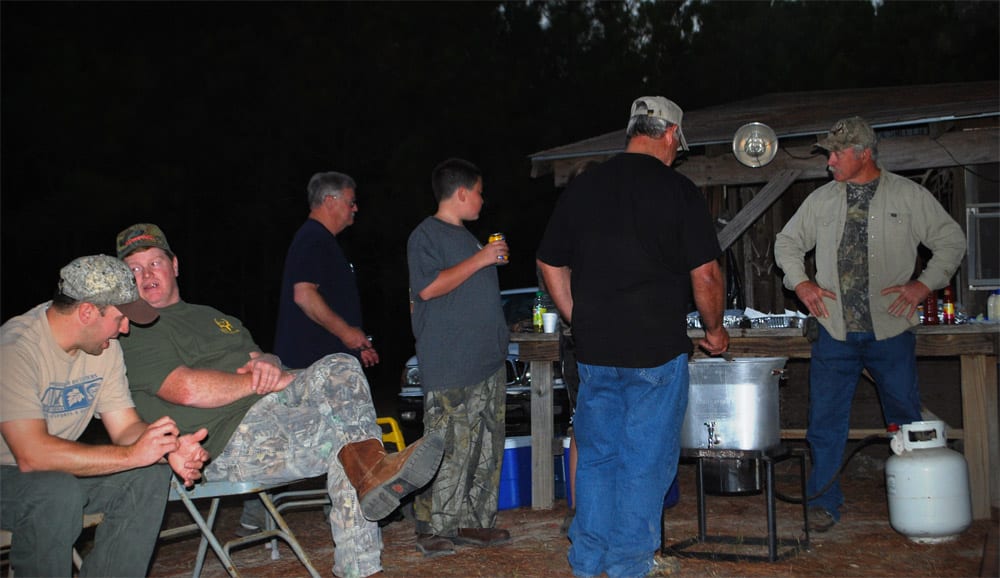 I wrote this little piece about three years ago. Our lease was almost bought by the US Military due to the expansion of Fort Polk Army Base, Louisiana.

When mornings become cool and summer turns to fall, the leaves start to change. And once again, opening day of deer season is not too far away. My family and I follow a narrow dirt road, to a small one room cabin back in the pine trees. At the deer camp, the smell of home cooked meals makes the place feel like home.

The crackling fire and the smell of fresh chopped pine, brings back memories of the old days. The sound of the kids laughing and the old timers telling their tales of the one that got away make you feel welcome. In the distance you can hear the wildlife rustling in the woods. It is so quiet that you can hear the wind blowing through the trees.

As the evening progresses, you can hear flocks of geese passing overhead, making their way to their winter homes. At sunset you can hear the coyotes howling at the night sky, and in the distances you can hear the call of the whippoorwills. The cabin is a peaceful place where family and friends get together and enjoy fellowship. It is a place where the worries of the world are millions of miles away.

Figure 1 “Photo” The small, one bedroom, cabin that Yancy Chandler is describing in this great story about hunters, hunting, the cabin where they go to enjoy each other’s company and how it all brings us together. One family of hunters (The Global Hunting Community, as we call it here at WILD Jaeger)!

My family’s deer camp was located about four miles from the main highway in Hicks, Louisiana. The camp we have now was built at my uncle’s house by the original members of the lease, in two halves and transported on a trailer to our lease. So many great memories have been made at the deer camp and the one mile square hunting lease which the family has.

There is something special about the area that draws family and friends back every year. I think it’s the feeling of a stress free life for a few days. It’s where we have nothing to worry about except harvesting “Old Split Toe”, that trophy whitetail that outsmarted us last season. Maybe it’s the feeling that you are living off the land and not having to go to the grocery store to pick up something you may have forgotten. Whatever the reason, it draws not only my family to our deer camp but thousands of hunters to their own deer camps ever year.

Figure 2 “Photo” The annual gathering of family and friends to deer camp is a tradition.

In Louisiana, deer season opens in September for bow and early to mid-October for rifle season. The food plots get started in early spring so we can have a good turkey season. Then after a long year, opening day deer season finally arrives. Opening day of rifle season, we have a big family reunion where everyone at the camp cooks their specialty. We have a large spread of vegetables from the summer harvest such as squash, potatoes, and purple hull peas.

We must have my Uncle Doylan’s, better known as Doc, smoked deer meat. Once the meal is served, we usually start telling stories of the one that got away last year; and how we know that we are going to get him this year. With all the technology it is funny to hear that we have the “big one” on film and we have watched him all summer long. We know exactly when he is going to walk out into the food plot or to our feeder. Then as the year goes on, the story starts to change. I guess the guy on the other lease scared him off? It is always a good time to listen to the stories that everyone shares.

The best story around the deer camp is about the encounter my brother and I had with four deer that walked right up to the camp! After a morning hunt, my brother and I met back at the camp. We cut some firewood, started a campfire and were talking about the afternoon hunt. All of a sudden my brother says, “Yancy don’t move!” So what do I do? Of course I turn to where he was staring.

I saw three does and a little spike. I turn and look at my brother like what in the heck is going on here! All six of us had a five minute stare down, until I noticed my brother’s gun sitting about ten feet away. Slowly I slid off the chair and moved towards the gun. Of course the deer got nervous and ran off like somebody set fire to their tails. Nobody believed that story until we showed them the deer tracks.

After everyone’s stomach is full and we settle down to drink a cup of coffee; the funny stories and those “oops” moments come out that were made the year before. The best one that I will never forget is when one of the hunters shot his deer stand instead of shooting the deer. The deer was so close to the stand that he thought he was aiming over the rail, but really he was not. When he fired the shot, it actually glanced off the rail and hit a few feet higher than the deer.

After everyone’s finished talking about their mistakes and how they are going to fix them this year, it is time to hit the sack.  The big oak log goes on the fire so we will have a good coal bed when we wake up. There is snoring at the camp leading to a restless night of sleep. In the morning, somebody makes a fire in the wood burning stove and it feels like a sauna. With all of the excitement of harvesting a deer, it is time for everyone to head out to their deer stands.

It is what the cabin represents that makes it an integral part of our lives. That annual migration to a place where the rest of the world does not exist. Where the stars are the street lights, the fire is the porch lantern and the conversation of a good friend is our entertainment for the night. At that point in time, at Deer Camp, you would rather be there than anywhere else in the world! Just for those few hours or days, the world as we know it is perfect.

The beginning of another deer season is what we all dream of.  I don’t know about you but I cannot wait until deer season begins next year so I can drive down that old beaten road that leads to the family deer camp. Good hunting and God bless!