Do It Even Though You’re Afraid! 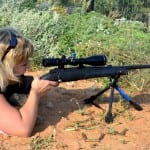 I always wanted to learn how to shoot long range, but never had the guts or the opportunity to attend a school. I had checked into the various schools and found that they were rather expensive, and from the pictures I seen there was not one woman in attendance.

One part of me said go for it, you will do great and show those boys how to shoot! And the other part was whispering, you will be the only girl and it will be an uncomfortable and scary experience, don’t do it!

I have never been the type to listen to that negative voice, thanks to the confidence and other important experiences; I have acquired in the great outdoors school of learning that I have attended my entire life. Because of an out of state bear hunt I had coming up, every resource I had was dedicated to that. There was no way I could attend a long range shooting school any time soon, or so I thought.

It just so happened that the crew, from the outdoor show The Best of The West, was coming to Texas to put on one of their long range shooting schools the next month. And like a dream come true, I was invited to attend as a special guest! I was ecstatic to say the least!

No matter how much that little negative voice inside tried to discourage me from going, I was going to attend the school, no matter what. I could choose not to go because I was afraid of being the only female in the school. Or, I could choose to go and to learn invaluable knowledge and abilities that could only enhance my life. What would you do? I couldn’t just sit on the side line, put me in coach-I’m ready to play!!

As I approached the Champion Ranch for the school, I started feeling very uncomfortable and it was quite scary, I must admit. I was welcomed with open arms by all that were there, all twenty or so men ranging from the ages of eighteen and up.

I dared not show my fear and tried to let my independence and confidence shine through. I went around the circle, firmly shaking hands and introducing myself. The next morning was the first day of class and I was ready to learn everything I could! We had classroom time learning about ballistics, windage, and the Best of the West shooting system we would be using. Then we were off to test our skills. As time went by the guys started giving me a hard time for being the only woman in the class. Of course, I gave them a hard time right back and told them I would show them up on the range.

The first target we shot at was at 536 yards. They asked who wanted to be first to shoot and I quickly accepted the position. I was confident in my shooting abilities as I have been shooting a high powered rifle since I was about eight years old. My partner called the wind for me and I dialed in my scope, then TINNG! I hit the line on the ten ring. Yes, that’s right, I hit a bull’s eye on the first shot during school by anyone-male or female.

My next two shots were even better as I made corrections and centered in on that bulls eye. There were high fives all around and instantly they were saying they had already been shown up by a girl! The next two levels were at 865 yards and 943 yards. Again, my partner, or spotter and I were dead on, and the guys couldn’t believe their eyes! I couldn’t either quite frankly, have you seen how far those ranges are? Believe me, they are far! After a day of shooting and more classroom learning ,we were all feeling the buzz of our new knowledge and abilities, and couldn’t wait to see what the next day had in store for us.

The next day was one that I will never forget. We had to go around the ranch and create live hunting situations from the high points on the ranch. Bear in mind we are in West Texas and well, the high points are not quite the same as being in the mountains of Wyoming! Our first scenario was shooting down to the water’s edge at 1024 yards. I could just picture an elk standing there as I was setting up to take my first shot. My spotter called my shot for me and when I was ready, I called out, “Fire in the hole!” I sent the bullet down its path to my target (which you cannot see with the naked eye from that distance), and watched as it hit RIGHT ON! We all jumped up and whooped and hollered in celebration as this was a very difficult feat, and with the help from my spotter, I had accomplished it!!

Me, a woman, the only girl in class, had just made the perfect shot at 1024 yards! I cannot tell you how amazing I was feeling at that moment. I was quickly challenged by the other half of the class that was on top of that bluff with me to see if I could hit it again. The next two shots were nothing less than perfect, and both were celebrated with much enthusiasm from all who were watching. They even called the rest of the crew on the radio to let them know of my great success as the only girl in class.

Our next target was even more difficult, an astonishing 1204 yards, and I was up for the challenge. After shooting a superior high powered shooting system so many times, you start to get a bit sore. Well, very sore, like you have been repeatedly hit in the shoulder. It was a very warm ninety degrees and the wind was beginning to pick up. This was a typical Texas day; add in some shoulder pain, along with doing something for the first time, it ends up equaling a difficult task at hand. It seemed like forever as we had to wait for that exact moment just between the gusts of wind to take the first shot. Again, right on target! I was able to hit a five inch pie plate, which is associated with a clean ethical harvest of a mature animal at a long distance.

I am extremely proud of my accomplishment and will never forget the knowledge and experience from working with this great group of guys. Doing things when you’re afraid is something we all have do to at some time or another, but doing them by choice can be sometimes almost unbearable.

If I had decided not to attend due to being the only female, I would have missed out on the opportunity of a lifetime. There are so many women that listen to that negative voice and bow out of participating in outdoor activities, because they believe these are activities that are for men only. To me every experience in the outdoors is an opportunity of a lifetime, and there are more and more organizations out there that are for women only.

Don’t be held back by giving into that negativity, do what your heart desires! You may want to seek out organizations that offer women only activities so that you will have a chance to learn or sharpen your skills in a stress free environment or just jump right in. But Listen to that positive voice and Go for It! You Can Do It and You Can Do It Even When You’re Afraid!

PrevPreviousBroadheads, Fixed or Mechanical
NextA LOOK BACK AT THE 2012 SeasonNext