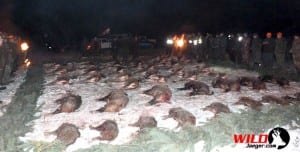 In Hungary winter time is traditionally the season for drive hunts in the big game areas of the country. 2012 was the third year that we organized a drive hunt with the hunting group where my parents are members. As in previous years, we invited a few good fellows to spend an evening together of camaraderie and have a good hunt the next day. We had a nice harvest the last two years, but 2012 was outstanding!

We had two longer drive hunts that day. There were 24 guns participating in the hunt. In Hungary, we discern there are two different types of drive hunts. We have what is known as the classical wild boar drive hunt, where we use dogs for chasing the boar out of the thicket. In this drive hunt, the hunters are not allowed to shoot at any other species then wild boar and fox.

The other type of drive hunt it is possible to take shots at red deer (of course just hinds) and female mouflon as well. We had the opportunity to shoot red deer hinds too, but we couldn’t use the dogs. It was an amazing day, I have to say. At the end of the day we got 41 animals: 18 wild boar, 22 red deer hinds and 1 female mouflon. I harvested a hind and two wild boars that day. It was really great experience. It is always a great pleasure to hunt with old friends, and we’ll never forget this day!

The photographs are not the best, but it was already dark as all the game was being gathered at the meeting point.