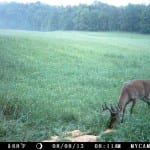 With archery season right around the corner, I find myself sitting on different job locations looking out in the crop fields for deer. I started scouting the first week of August and will continue till the 2nd week of September. There are many advantages to scouting, but some disadvantages as well.

If you hunt on private property, where there is little pressure on the deer herd, you will be able to pattern the deer. Hopefully you will see some nice deer, by finding their major paths leading to a food source such as crop fields or fruit trees. Patterns may change, since the acorns are not dropping until later in the year.

If you hunt public land or property where there is a lot of pressure, chances are the deer will not be very active until after night fall. This is where your Moultrie game cameras come in handy. When scouting public land or a high pressured property, find the food source and heavily used game trails.

Place your trail cameras off of the trails, just like on private land. In my opinion, always use a lock box with cables to keep dishonest people from helping themselves. Do the same with your tree stands. If you use hang on ladder sticks, space them to your maximum step reach and take the bottom steps with you, when you leave your stand.

Public land can be very productive if you do your homework. Just ask Pro Staff member Dale Kiser from Kentucky. He harvests some monster bucks on public land every year. If you scout deer on public ground, take your time and don’t overlook the little things. There are such trails called buck trails, though they are very small and hard to find. A whitetail buck will frequent lightly used trails that he uses to check fields or food sources. In the early season, the bucks will also uses these trails as rub lines to get rid of their velvet. Check these area’s for buck rubs.

Baiting is legal in many states. Please make sure to check your state fish and game laws to see if it’s legal to bait on state game lands. If you hunt on private land and can get a pattern on a mature buck with game cameras and scouting, then you have the cards stacked in your favor. If you can bait in your state, then your odds are even higher.

Mature bucks will almost become nocturnal throughout the month of September, until the pre rut heats up. I have taken several photos of big deer all summer long and in groups. But as the seasons change, so does their tempers towards each other. The bachelor groups break up fast.

Do not over hunt one area, but if you find a great food source try to sit near that spot all day. Even though big bucks may be elusive in the early season, their stomach drives them to feed before the rut kicks off. With the cooler nights, the deer start getting their winter coats which also makes them less active during the daylight hours.

I use my game cameras to my advantage. They give me an idea of how many does are around, along with the bucks in the area where I’m hunting. Later in the season, I want to know where the Doe’s are in order to find the big bucks.

Figure 2 “Photo” A family group of Doe’s in a staging area.

I have several so called honey holes which are soybean fields, alfalfa and corn fields for the early season. Not only are these outstanding places for early season whitetails, but if you hunt private property it helps the land owner out by controlling the deer population. Too many deer on a farmers land are not good for his crops.

It’s important to do your homework by scouting early, but not too often and using your game cameras to your advantage. Good luck and enjoy your hunt with friends and family.