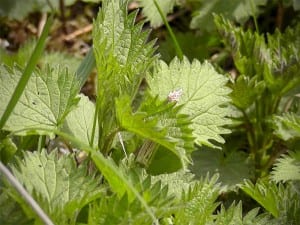 Many people associate the nettle plant with pain, when it makes contact with your skin, as you are walking through a particularly moist section of woods on a hike, camping or hunting trip. Not many people would even consider putting this plant in their mouth and would rather stay as far away from it as possible. But on the contrary, nettles are one of the most readily available, and healthy plants you can harvest early in the Spring, when the shoots are young and tender.

As a child most of us wandered through the woods in our shorts and sandals and felt the sensation of the stinging, burning feeling that a quick brush up against a nettle plant produces. But, did you know that nettles are very tasty and one of the power foods that Mother Nature provides us.

Figure 1 “Photo” The nettle plant that we all know and love (and associate with pain, but not eating).

I have been wanting to write this article for a few years now and finally had the time this year to sit down and make it happen. April is the month when the green leafy shoots of the nettle plant start to poke their heads up through the soil in and around wetland areas in the woods, fields and streams where we hunt, fish and play.

The best time to go out and harvest nettles is early in the year, before the nettle plant flowers and then goes to seed. Like most green edible plants in the WILD, after they get large enough to reproduce, they get fibrous and tend to also get bitter and the nutritious qualities that the plant had while young are no longer there. Basically, the plant has used that built in nutrition to grow and produce its reproductive parts.

One thing to keep in mind when deciding when to go out and harvest nettles is your state and phase of Spring time plant growth. In some states/countries the nettle growth may come earlier or later. No matter what, remember the rule about eating anything you find in the WILD. If you are not 100% sure of what you are looking at and harvesting, DO NOT put it in your mouth! I think nettles are pretty easy to distinguish though, just rub your skin on it! But always use safety first as the rule.

The nettle plant is easy to harvest, but you are going to want to take some caution when attempting to do it. Some items you will want on hand are:

1. A large basket: Nettles will fill your basket fast because they are abundant where they grow, but when cooked down, actually produce very little. You need to pick a lot for a family size portion! But hey, it’s free.

Figure 2 “Photo” A basket full of nettles. Ready to take back to the kitchen, strip the leaves off of the stems, rinse with cold water and cook. Notice that the undersides of some of the young nettle leaves have a purplish tint to them.

2. A good pair of gloves to protect your hands from the stinging characteristic associated with handling nettles with your bare skin.

3. A knife or pair of scissors is recommended for cutting the plant to collect it. I use a simple pair of house hold scissors. The scissors go right through the young shoots with ease.

Figure 3 “Photo” Ricky Mills out collecting nettles to be used to feed his family. Notice how short the nettles are. In a few months these same nettles will be waist high, and inedible.

Why eat nettles? Here are a few reasons to consider it:

1. They are free and readily accessible.

2. Nettles are one of the most powerful iron sources in the vegetable kingdom. They are great for anemia, and as a general blood tonic. Nettles are good to eat in general whenever you feel run down, or tired.

3. Eating nettles or drinking the tea (water produced after par boiling the nettles during cooking) will make your hair brighter, thicker and shinier. It will also make your skin clearer and healthier. Eating nettles is also good for eczema and other skin conditions. Nettle tea is also a tonic used during watering of house or garden plants! Make sure to strain the tea through a cloth to get rid of any nettle plant hairs that may be in it after boiling.

4. Nettle is also delicious as a green leafy vegetable. Some people do not think so when the nettles are eaten on there own, but all manner of sauces and baked dishes can be cooked with this nutritious ingredient added.

5. Nettles have ten percent more protein than any other vegetable.

6. It is wonderful in frittata or in quiche in place of spinach, and is much more nutritious (1).

Here is another delicious suggestion for cooking nettles in your kitchen at home.

 Wash and trim leaves from the stems

 Using a hand blender, blend in a little cream

 Season with salt, pepper and a little nutmeg to taste

This recipe is great when served with some mashed potatoes and a medium rare steak.

Figure 4″Photo” Some of the preparation of the Nettle Cream Sauce that we made with our harvested nettles this April 2012.

Here is a little tip for extending your nettle eating season. You can blanch the nettle leaves just like you would spinach and freeze the leaves in portion sized zip lock bags. This is a good way to store it for summer and even later, fall or winter use. The recipe provided in this article can also be stored frozen, once it is finished cooking, store it in tupperware containers or again in portion sized zip lock bags.

Source of the nettle nutritional information in this article: