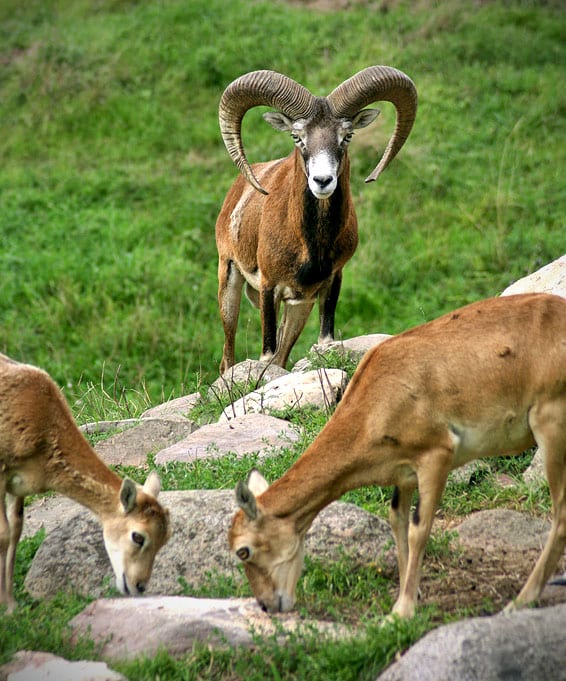 By Mathew Cervantes, WJ Board of Directors

Figure 1 “Photo” a Mouflon Ram and his two Ewes in the wild.

Mouflon are the big horn sheep of Europe. Although Mouflon are exported around the world as “exotics” from Hawaii to Texas, they originated in Asia Minor before being hunted to near extinction in southern Europe 3000 years ago. Native populations existed from Turkey to the Balkans, but were never in Western Europe as they are found today. Current Mouflon populations are transplants from the last natural remaining herds in Sardinia and Corsica. Although thousands of years ago the sheep were hunted to near extinction, everyone from modern hunters, the Yugoslavian dictators Tito to the Romans have reintroduced them across the globe.

Many arguments surround these wild sheep as to whether they are the stock of the modern domestic sheep found on farms across Europe and America. Mouflon colors vary from red to brown, black and a white saddle. Adult males are called Rams and adult females are called Ewes. Body weight can vary from 70-100 lbs or 30-45kg and can be from 24-36 inches or 60-100 cm at the shoulder. Horns can reach up to 36 inches or 95 cm with an average length of 70 cm or 28 inches.

Although large populations exist in some areas, the Mouflon is listed overall as vulnerable by the International Union for Conservation of Nature (IUCN). Few natural predators exist within the same biotopes, the majority of bears, wolves and big cats have been eradicated. At present, eagles are one of the main predators for juvenile Mouflon.

Average life span is between 8-11 years in the wild with zoo specimens surviving up to 15 years.

Mouflon live in herds in rocky and mountainous terrain in the Tatras, Carpathians or the Dalmatian coast. But, they can also be found in the forested meadows of central Europe to exotic game farms in arid Texas.

Mornings and late afternoons are the most successful time to hunt as the sheep graze with noon being a time of rest.

Regulations and laws vary greatly from country to country and state to state. Please contact the local game management office for exact details and regulations pertaining to the area you are hunting.

Considered to be one of the most beautiful sheep species in the world. Native to Europe and Asia Minor.

Archery: Although archery hunting may be prohibited in some European countries, in the US compound bows with a legal minimum of 35 lb. draw weight is required. Crossbows for seniors and disabled hunters with a minimum draw weight of 25 lbs. Brodhead with a minimum 7/8 inch cutting diameter.

Notes: Breeding season known as the “Rut”, is late fall to early winter depending on the geography and altitude. Dominant rams fight by butting heads.