European Social Hunts: The game is plentiful and rich with tradition! 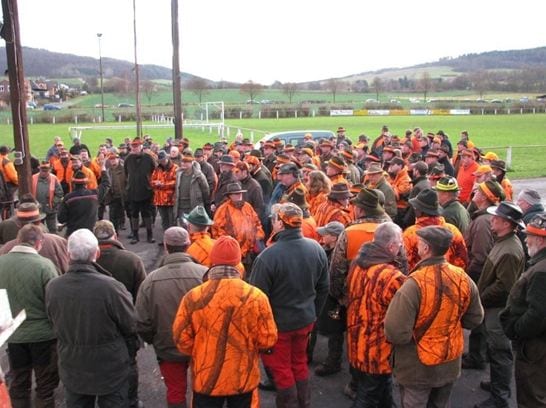 As the European hunting season comes to an end each year, Revier holders
review the level of success achieved in the management of the game population (Harvest /Abschuess plan) within their respective hunting land. The directors of State and Federal forest land also conduct the same review, to determine if the appropriate game quota is achieved prior to the arrival of the harsh winter months.

Often, both individual and State/Federal forest harvest plans are not completed by the end of October. Therefore, it is necessary to conduct one of the two forms of Drive hunts (Drueckjagd or Treibjagd) to obtain the annual game management goal.

Dive hunts are normally conducted from November through January and
vary in size from 10-15 hunters to more than 100 hunters with drivers, beaters and well trained hunting dogs.

Figure 1 “Photo” Over 100 hunters, drivers and dog handlers at Hessen NATO Hunt receiving hunt instructions on 28 November 2009, one of the largest single drive hunts in Germany.

Drive hunts, or social hunts, are often known as Gesellschaftjagd. The basic
hunting tactic employed during social hunts (Treib and Drueckjagd) is to push game passed the hunters. The hunters are either in an Ansitz (wooden hunting high seat) or standing at key locations to cut off the game as they attempt to escape the area being driven. The Jagdherr, drive hunt manager, usually has an expected number of game that he wants harvested.

Treibjagd differs from Drueckjagd: the Treibjagd is high pressure action on the game, where game is pushed in a very aggressive manner; as rapidly
as possible in a direction that passes a set of pre-positioned hunters. The hunting group normally consists of a large number of hunters. Usually more than 50 total personnel will make up the hunting party (10-20 hunters, 10-20 beaters and 10-14 well trained dogs). The goal of the Treibjagd is to harvest as much game possible. This hunt seldom lasts more than 3 hours.

A Drueckjagd is mostly conducted for Deer and Boar hunting. Hunters are normally positioned in hunting stands (Ansitz) but sometimes they are also stationed in pre-determined standing positions near known traveled game trails or crossings. The hunts are conducted using a small number of beaters and only short legged dogs that move slowly through the woods in order for the game to coast forward, with low pressure, toward the hunters. Hunters are often instructed prior to the beginning of this hunt exactly what game is desired, the slow tempo ensures positive identification and selection of the game.

Another hunting tradition that is expected of drive (social) hunt participants is attendance at the game layout ceremony at the completion of a successful hunt. The game layout consists of all the harvested game being laid out by game category. And the layout will be dependent on whether it is a big or small game display. The layout is called the Strecke. Traditionally the appropriate hunting horn music is blown to honor the game on display.

The Jagdherr honors the successful hunters during the Strecke by presenting each with a shooter branch, which is worn on the right side of the hat. When presenting the branch, the Jagdherr will say, “Waidmannsheil” and the hunter will reply with, “Waidmannsdank”.

It is also important as part of this ceremony, for the hunter to take off his hat when receiving the branch from the Jagdherr and all hunters will remove their hat when the horn blower plays “End of the Hunt” (Jagd Vorbei) and “HALALI”.

Following the hunter honoring ceremony, the actual social part of the hunting ceremony begins with the Kesseltreiben. This informal dinner is where the hunters enjoy some social time together over a beer and a small meal. They share hunting stories from the day’s hunt and get to know one another, often rekindling old friendships or making new hunting friends and discussing upcoming hunts.

I have been invited to more future hunts and been made aware of additional hunting opportunities through my attendance at post hunt social dinners than through all of my formal invitations.

I hope this article helped you understand some of the details of the social hunt in Europe, specifically the Treibjagd and Drueckjagd. The next article in the series will be, “A Rabbit Treibjagd – The Ferrets Are Underway”.