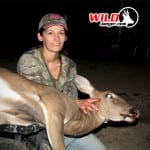 We bought our property in the summer of 2007. It was a bank repossession that we got for what at the time, seemed like a steal. What we ended up buying was actually five acres of low quality ground, no mature timber, a house that was falling in, two garages that had seen better days, and a really nice pole barn. Most of the five acres was used as a dump. Old tires, scrap metal, appliances, and hundreds of pounds of broken glass littered the property.

Anything that had any value was taken by the men the bank hired to clean up the place of course. Everything that was left behind cost money to get rid of. It took about nine months to get the majority of the property cleaned up and the house suitable to live in. We were left with a quarter acre of dirt surrounded by trees, after the property was cleaned up. We decided to plant a food plot instead of planting grass or waiting years for trees to grow. We spent a few weeks getting it prepared.

We finally got it planted in the last few weeks of spring in 2008. It was replanted in the fall and we haven’t done a single thing since then, but mow it a couple times per year. It brings in a handful of resident deer every year. I always opted to hunt in the woods prior to this year. I only get to hunt in the woods a couple of times each year but I never have much luck.

This year, the deer have been using the food plot every evening like clockwork. Every night between 5:30 and 6 pm there have been between one and six deer in there. I decided to take advantage of this and placed a blind in the southeast corner. I tucked it into a small row of trees and covered it with some brush. I left it there for a few days to give the deer a chance to get used to the new scenery. The deer didn’t seem to notice, and I could watch them from the backdoor. Quite often they were easily five to ten yards away, while I watched.

The first night I sat in the blind, the deer came in from the northwest corner as usual. However, three kids running out the back door quickly pushed them into the woods. I decided after that, it probably wasn’t worth sitting out there any longer. But, the next night I tried again, and the deer didn’t come into the food plot at all. I gave up for a few days, but keep watch to make sure the deer were still using the plot. After a few days, they returned, and were back to their regular schedule. I decide to try a stalk on the evening of the 15th, but I got a bit too close. I was startled after popping my head over the weeds to see a doe staring at me less than 10 yards away. Needless to say, she was out of there in a hurry!

On the evening of the 16th, all three kids were napping, as I peeked out their bedroom window to see a doe in the food plot. I knew that if I walked out there, I would either get a quick shot or I would quickly blow the opportunity. I ran downstairs, out to the car and grabbed my bow. I threw on a camo shirt, and quietly walked across the driveway, in between the garage and pole barn. I snuck up to where I had placed the blind. I tried to be as quiet as I could.

By mistake, I left my flip flops on instead of throwing on my rubber boots or at least some tennis shoes. I still cannot believe, that she didn’t hear me. I snuck up beside the blind, trying to keep myself hidden from view, not knowing exactly where she was. I looked out from behind the blind to see where she was. Luckily, I had spent a lot of time previously ranging the food plot, and knew about how far she was. My guess was right around 30 yards. I waited for a broadside shot, while hoping that she would come a bit closer. She turned to start walking and I had to make a decision. Do I wait and see if I was presented a closer shot or just take the shot now?

I decided to take the slight quartering shot. I drew, released, and hit perfectly. She didn’t travel more than a few yards and went down, right in the middle of the food plot. I quickly called my husband, letting him know, that I was going to need some help. I ran over to make sure she had expired. Then I went in the house, to make sure the kids were still asleep. I hurried back outside to get the garden cart. I honestly thought that getting a doe larger than 150 lb on a garden cart would be easier, than dragging her forty yards to the pole barn. I was wrong!

My husband got home within minutes of my attempt. He helped me get her loaded and hung up. It was a mad rush to get her gutted, skinned and cooled off in the almost 70 degree weather. Because of this, we only managed to snap one picture. It’s always such a huge accomplishment for me to get a deer with my bow, especially the first deer of the year. It’s even better when the freezer is full!