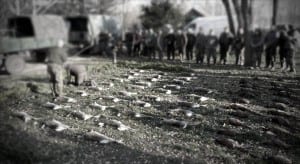 Hungary is not only famous for its huge red stags and roe bucks, but in the plain areas you’ll find big populations of the most common small game hare and pheasant. Hunting this small game is always a social occasion where you spend a nice day with friends walking in the field. We usually celebrate at the end of a day of small game drive hunts with a late dinner, where we share our experiences of the day.

Two years ago, I had the chance to take part in a drive hunt in the Rákóczi Ferenc VT hunting club, where an old friend of mine Tibor Kapuvár is a member. And again recently, I was invited to a small game drive hunt. I was very happy, because in 2012, there were no opportunities to go on any small game drive hunts. My dog Sarah was angry with me, because she is fond of hunts like this. Törtel is a small village, about 100 km southeast of Budapest surrounded by large open fields in every direction. These drive hunts usually start with a small speech given by the president of the hunting group and safety instructions. This morning was special because we had three hunting horn blowers who raised the standards of the day by playing traditional sounds in the morning sun.

We all got on an old truck and drove along the road to reach the first area for hunting. We had 32 guns and about 10 drivers and dogs together. The most common way to conduct a small game driven hunt is to line up the hunters in a U-form with a length of 250-300 meters and with two wings of 100-120 meters. The drivers are placed between the hunters but not in the wings. We usually drive an area of 8-10 square kilometers which strongly depends on the terrain. It is important to be aware of the distance between each other and to make sure that the line of hunters is always straight, and nobody is “sagging”. We are given instructions by the leader of the hunt that needs to be carried out till the end of the hunt. This especially is true when it comes to shooting or searching, the whole line stops. We were shooting hare and pheasant-cock. On this day we made 3 driven hunts with distances of 2-5 kilometers, which was a lot of good physical training too. At the end of the day, we got 36 hare and 18 pheasants, which is a nice harvest. Mostly these hunts end when all the hunters get a hare, which means that the group shoots at least as much game as the number of hunters participating at the hunt.

Figure 2 “Photo” The ceremonial ending of a great day hunting with friends.

The ceremonial part of the hunt begins as all the game is placed between cut pine sticks in a square and a fire is burning on the 4 corners. It was beautiful to hear the well-known sounds of “the death of the hare” and “the death of the pheasant” from the blowers. For one of the hunters, this was a very special day because he harvested his first hare; and according to the tradition he was initiated as hare hunter. As you can see from the photographs, he had to bow above the hare. And after the speech, from those in attendance, he got some beatings with a stick.

Figure 3 “Photo” A hunter is thankful for his first ever hare harvest.

That’s how a traditional small-game drive hunt works in Hungary!