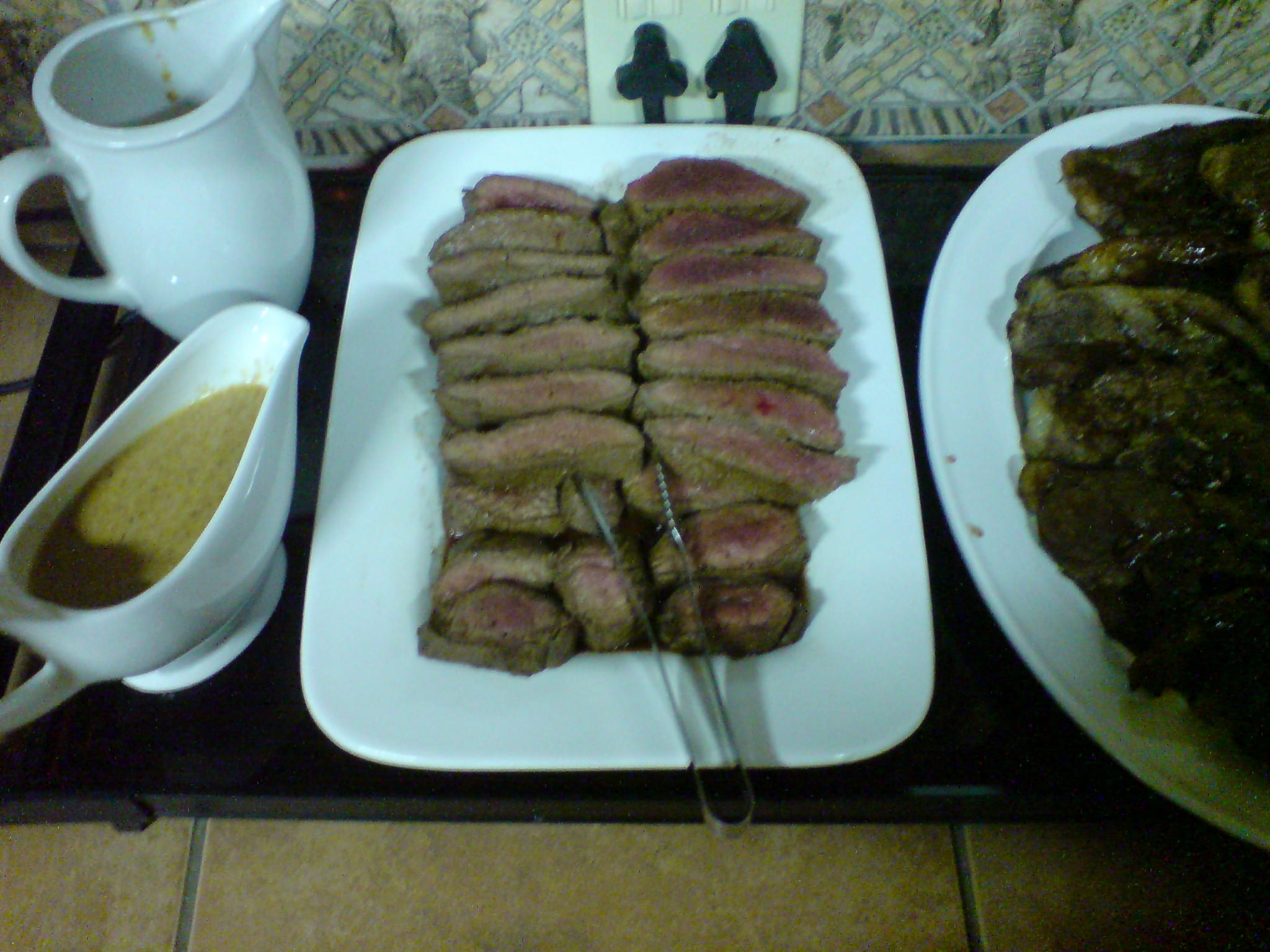 When hunting in Africa, it is always good to start out with something small, easy and plentiful. Springbok hunting certainly fills this need. Springbok are plentiful and they make a challenging target.

Males are around 70-87cm (28-34 inches) high and weigh 33-50 kg (75-100 lbs), similar to the diminutive, overpopulated whitetails of central Texas. If a hunter can accurately drop a springbok, then he or she should have no problem with any of the larger animals out on the savannah or in the thorn bush.

We loaded the truck for our first day of hunting, Fred, Dad and I sat in the back along with Phillip, our Afrikaner guide. Our driver was a man named TomTom. We settled in for
a nice morning drive and started looking for game. We stopped for a while as Fred and Phillip dismounted to attempt to stalk.

While we waited, I saw several animals and used my many cameras to take pictures of them. A nice Wildebeest showed itself about 100m away, and watched us for several minutes. I took some great pictures of him. When I later showed them to Barry, he told me that was a good one and I should have taken him. Actually, I went through the mental practice of
observing the Wildebeest and choosing my shot placement. But, I would not shoot without a guide with me. I considered that improper, especially on the first day of the hunt.

Figure 1 “Photo” A Wildebeest that Robert Hembrook was fortunate enough to see while out waiting for another hunting party to return.

I stood near the truck, scanning the area with my binoculars trying to find my bearings, in this place called Africa. The temperature was a bit cold, so Dad lent me his black Ducks Unlimited vest. It seemed to go with the khaki and green I was wearing. My trousers had pockets secured by Velcro, but were far too noisy to get into. I learned quickly that Velcro has no place in hunting, it is too noisy and scratchy, and I resolved to use only shirts or pants with buttons in the future.

I stayed near the truck, as some do when hunting in Africa for the first time thinking, “There might be something bad out there”. Actually this part of Africa is quite safe, with no dangerous game left and few, if any, dangerous snakes or insects. Still, I erred on the side of caution…

Fred and Phillip came back empty handed, so we headed off to see what else was out there. We spotted some springbok, and Phillip said, “Want to go?” Of course I said yes! So we hopped off the truck. My first order of business was to take my Savage along and Phillip took his shooting sticks. He adjusted them to my height and we were off.

I carried a pre-Accutrigger Savage 116 FSAK, a stainless-steel and plastic stocked .30-06 with a medium heavy fluted barrel with Savage’s Adjustable Muzzle Break. I had topped it with a truly excellent Bushnell Elite 6500 2.5-16×50 scope. The 50mm lens is overkill for African hunting, as very little (except the leopard) is hunted after sundown.

I had loaded the rifle with hand loads consisting of a 165 grain Nosler Partition over 60 grains of Vihtavuori’s N160 powder, sparked by Remington 9 ½ primers in Remington cases. This netted me a muzzle velocity of over 2900fps. This load is safe in my rifle, but as always I recommend that you start much lower and work it up in your rifle (Robert is an expert
re-loader and does not recommend that you try this with your rifle. Neither Robert nor WILD Jaeger accepts responsibility if you decide to attempt this load in your rifle).

As we began to follow a herd of springbok, I noticed the terrain was pretty open with lots of low grass interspersed with clumps of taller grass and thorn bushes. As we stalked forward, Phillip and I chatted about shot placement.

Springbok are a good first animal: they have imprinted on their hide where to shoot them! If you look at their coloring, a springbok has a white belly, and a tan top. In between is a
chocolate brown stripe that ends right behind the shoulder. If you look at where that chocolate ends, that point is an ideal place for the classic “top of the heart” shot, which disables the respiratory and circulatory systems at once and is a quick and humane kill.

As we stalked, moving from clump to clump, we suddenly saw a springbok step out from behind some taller grass, several feet high. We stopped as it looked at us, and we at it.

It was a very striking ram. If you look at springbok trophy development, the horns start out thin and straight, but begin to have a pronounced curve forward when they are young. The horns also grow in a subtle spiral. As they age, the tips of the horns go from pointing forward to pointing gradually together, eventually pointing at each other. With really old rams, the tips actually start pointing slightly towards the back of the animal.

This ram had his points clearly pointing inward, so he was a good one. Phillip set up the shooting sticks, while I laid the plastic stock of the Savage into the canvas sling of the shooting sticks. I checked my view. I had the scope down at minimum power for stalking, in case I saw something close or moving.

Many a shot has been lost because someone had a variable power scope up too high. With 2.5 to 16 power on tap, the Bushnell Elite 6500 offers a lot of adjustability. I eased the magnification up to a more comfortable 6 or 7 power and released the safety.

I placed the crosshair where the chocolate stripe ended. I tried to calm myself, slow my heart and finish breathing. As I exhaled, I steadied during the natural pause in my breathing and held. I slowly squeezed the trigger. The rifle bucked under the recoil as I sent the 165 grain Partition towards the Springer standing about 135m away.

The bullet struck home and the springbok turned and ran off. I immediately worked the bolt of the Savage and loaded another round into the chamber. Waiting a second, Phillip said, “It’s ok, let’s go.” I clicked the safety on my rifle as he folded his tripod.

Walking to the place where I had shot him, we turned right to follow the game trail from where the little guy had come. 25m or so up on the grass we found him, already dead. Phillip shook my hand and clapped me on the back and congratulated me for getting my first Springbok in Africa.

Figure 2 “Photo” Robert Hembrook with his first Springbok. This was Robert’s first hunt in Africa.

Using his radio, he called the truck while we looked at the springbok and took pictures with it. When Dad arrived in the truck, he put the SLR to work as well, snapping pictures of me in my triumph.

Presentation is everything, so we picked up the springbok and moved him to a nicer looking area. We set him upright, and found a stick to prop his head up while Phillip washed the blood off with a jug of water. Photo taking commenced, with Phillip, Dad and Fred joining in to help capture the moment.

Phillip dipped his finger in the blood of the animal and marked me with the traditional marks awarded to an African hunter: A streak on both cheeks, forehead and chin. I was as happy as when I was knighted a Jaeger by the Germans. My third continent conquered!

We loaded the springbok into the truck and headed back to the ranch house for lunch. Mine was the first success from our 5 man hunting party, and we were all very happy. Later that evening, we served up the springbok as steaks for dinner. I have to say, they were very tasty!

Figure 3 “Photo” Dinner of Springbok steaks the night that Robert harvested his Springbok.