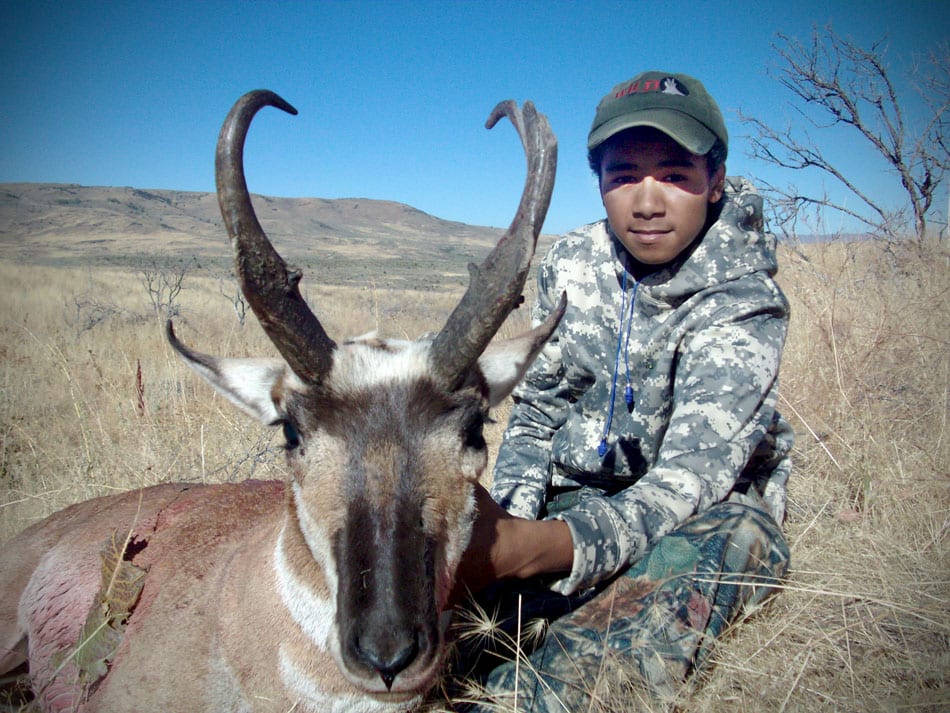 My stepson Ryan and I received the good news that we were drawn for Antelope tags in June. From that point on, we prepared for a desert Antelope hunt. I prefer to hunt unguided and on public ground as much as possible, so this hunt perfectly fit the bill. We live in Idaho, which has more public land than any other state in the union except for Alaska. As with many eastern states, controlled hunts are issued via a lottery system. Idaho has not adopted a point system, so all resident hunters have the same chance of drawing a tag. Non-resident hunters apply the same as residence and a total of 10% of all tags are given to non-resident sportsmen. This makes it a great option for adventuresome hunters willing to leave their comfort zone and head into the great western plains in search of adventure and game.

We shot frequently at what may seem like long ranges, but I had a long range rifle built specifically for accuracy beyond standard ranges. We practiced beyond 500 yards and at times very near 1000 yards. The caliber was a 7MM and the bullet was a 168 grain killer. For any long range gurus, if you haven’t looked into the bullet coefficient of bullets for this combination, it is definitely worth a look. My rifle was combined with a Leopold variable scope, fitted with a drop compensating turret, specifically made for the load out of my rifle. This enables us to dial the scope to the exact range of the game and hold the cross hairs where we want the bullet to go. These simple shooting mechanics make almost any shot possible.

We scouted the area on several occasions and knew of water sources that many of the desert ungulates watered at in the heat of the summer. We had also spotted several very nice antelope that would look very nice in our trophy room. As the summer came to an end we were ready for opening day.

September 25th was opening day and at 4:00 am we found ourselves on the road heading to our pre scouted Antelope hot spot. As the sun peaked over the Owyhee mountain range we started glassing in earnest. Almost immediately we found our intended target. Two Antelope bucks prowling along the top of a ridge within about half a mile (800 meters). After carefully examining them through my 10x Swarovski binoculars, I decided they were worth trying for. We scrambled to get our gear and head the bucks off, before they headed onto a section of private ground on the next ridge. At the time of this hunt, my son was 16. He was introduced to an outdoor life style early in life, so he was more than ready to hustle into position for a shot.

The Antelope’s eyesight is one of the best in the animal kingdom. Many experts estimate their eyesight somewhere between 8x and 10x. They use their phenomenal eye sight to foil many stalks and ruin the day of all kinds of predators that would like to make a meal of them. This same eye sight was used to spot the two hunters closing in on two particular bucks. The bucks put into action another of the gifts of desert survival, their speed. They can run at speeds over 60 miles an hour across the bare uneven ground of the desert. I don’t think they ran that quickly from us but it was much faster than we could go. They simply outdistanced us getting to a section of fence that was down, giving them access to the private ground that we did not have permission to hunt. After gaining access to this section, they relaxed and strolled broadside within my comfortable shooting range. They were safe though, so we moved on to look for less wary prey.

We didn’t have to go far. I knew of a draw just a few miles from where we were. Just two weeks earlier, I watched a bachelor group of five bucks in that location. We had almost no sooner set up for glassing when I spotted a now familiar white and tan animal ducking into a tight draw. The position of this draw didn’t allow us to glass into it, but we watched for the buck to leave the draw for about 30 minutes. The buck never left the draw, so we elected to try for the buck. My first impression of the buck was that he carried a respectable set of horns and was somewhere around 15 inches. But, because I didn’t have much time to study him before he ducked into the draw, I wasn’t sure he would be big enough.

I wanted Ryan to get a good antelope, being a sophomore in high school, he didn’t have a lot of time to hunt. I thought it best for him to fill his tag first and I could hunt later in the season if needed.

As we closed the distance to the draw where we saw antelope last, we slowed our pace considerably. We had a small breeze blowing directly in our faces, so I didn’t think the antelope would smell us. Slowly, one step at a time, we inched over the last rise and to our shock the draw was empty. I didn’t panic knowing this country was full of little crevasse and nooks and crannies. I knew there was a good chance the bucks were somewhere close. I told Ryan to get ready in case the antelope suddenly showed themselves. He looked at me like he didn’t believe even a mouse could hide in this shallow draw without us seeing it. I continued to motion for him to get set up on his shooting stick until he grudgingly obliged. Then I began glassing in earnest, and to my amazement, I found horn tips just 50 yards away on our side of the draw. Not only the buck I had seen earlier but another smaller buck and three does were nestled in a little pocket just under our noses.

Ryan was already set up on the shooting sticks, so the next move belonged to the antelopes, and we waited. We didn’t have much time to wait because one of the does saw something and got nervous. Before long she stood and snorted and started to walk away from us. As you can imagine the rest of the heard was not far behind. I took my time judging the bigger of the two bucks before telling Ryan to shoot the last buck. He dropped the buck with one practiced shot, directly into the boiler room of the great buck. The rest of the herd vanished over the next ridge in less time that it takes to tell you about it.

Figure 1 “Photo” Ryan Lasater with an Antelope that he harvested on a hunt with his father, Dason Lasater.

With one great buck down, we paused long enough to get pictures, pack the buck up and taking it back to the truck. We planned on a successful hunt and had ice waiting to help cool the meat. Proper meat care is one of my biggest concerns in this style of desert hunting. I recommend everyone having a plan to cool the meat as soon as possible. In my opinion, antelope steaks are some of the best wild meat available to a hunter. To possibly ruin the meat due to poor planning would be disastrous!

Now the hunt for my antelope began! As with Ryan’s buck we didn’t have far too go. Just a few miles from where we cleaned his antelope, was a water tank tucked in the bottom of a big draw. As we approached the canyon the water tank was in, I spotted more goats. A quick examination revealed one was a buck worth a second look. We planned our approach making sure the wind was in our favor and started out. The stalk was relatively easy because of a deep cliffy draw parallel to the hill the antelope were on.

I crawled the last few yards to the lip of the shallow draw I had used to conceal my approach. Very slowly I raised my head, to the point that my eyes barely peaked over the rim. The Antelope group was still in the same position they were in 45 minutes ago. I had first glimpsed their tan and white bodies outlined against the yellow grass of the high desert hills that they called home. I slowly planned my final approach. I eye marked different landmarks to guide me as I slipped closer.

I eased along the draws cliffy edge, until the tree I had marked earlier was in front of me. Slowly, I crawled over the lip and toward the unsuspecting antelope. A small depression concealed me as I made the last few yards before setting up for my shot. With my Lieca Rangefinder I lased the distance, dialing my scope to the exact distance. I was glad I had practiced long range shooting all summer. The 426 yard shot was one I knew I could make. After the report of the rifle, antelope scattered and disappeared like only animals capable of high speeds can do. My buck only made it 5 yards.

After examining my buck I was very pleased with it. It was 15.5 inches and had ivory colored tips on the end of each horn. This great buck now holds a respected place among my other antelope trophies.