Hunting in Africa for Blesbok 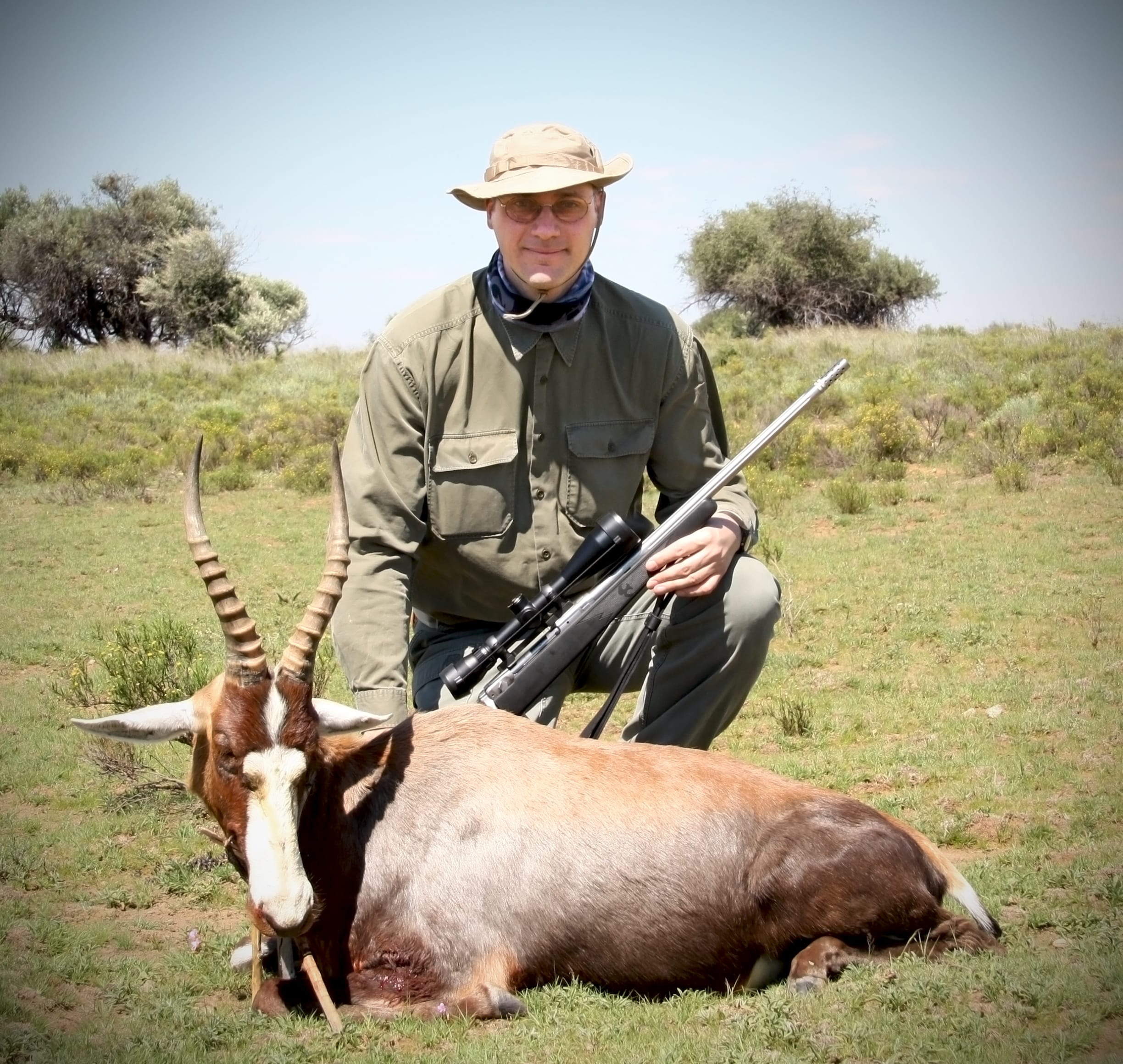 In 2009, while hunting in South Africa, I took a Springbok and my next target was a Blesbok. At 70 kilos, a Blesbok is a step up from a Springbok. They are purplish brown all over, with white bellies and a very distinctive white blaze on their face, which is what gives them their name (Blesbok = blaze buck in Afrikaans).

We came across a good herd of Blesbok mixed in with Springbok, while out driving looking for herds. We began to stalk the herd, looking for an old herd buck. I saw an older one walking a bit stiffly. He tossed his head a bit as he walked. He was standing in a pan grazing with other Blesbok. A pan is a flat area of grass where water settles when it rains.

Figure 1 “Photo” Robert Hembrook and his guide sneak through the bush to close the distance on a mixed herd of Blesbok and Springbok.

We were about 200m away, and it was windy. I had the Savage 116FSAK in .30-06 again. We stalked a bit closer because of the stiff quartering wind. According to the Phillip’s Leica Geovid laser range finding binoculars that I was carrying we were at 160m when we ran out of cover to move through. We waited a bit while the herd moved around some. I was waiting for a clear shot of the buck without any other animals behind him in case the bullet continued to travel past the buck. He finally got to a position where he was almost completely broadside facing to my right.

With the rise of sporting television in America, here is a new trend towards range shots against game animals. Some television shows make this look not only effortless but commonplace. Shooting on the plains of Africa is nothing like shooting off a bench at your favorite range at known distances. There are many factors that can affect your shot. Be honest with yourself about your abilities as a shooter and do the animals a favor.

I have shot in a lot of competitions, with service rifles using open sights at 300 and even 600m. I know how to dope wind and compensate for a mirage. I shoot well enough to get invited to compete by strangers. Even with all of my experience, I still do not take long shots on game animals. The rule of thumb in Africa is, “If your shot is over 200m, you are not hunting hard enough.” There are exceptions, as certain animals (a Mountain Zebra comes to mind) present fleeting opportunities for a shot, and you may not see one again for a long time. However, for most game on the plains, you should endeavor to close the range to well under 200m if you can.

I lined up my shot from the tripod. The wind was fierce and blowing in my face at a 45 degree angle from left to right. Knowing the bullet would drift right, I moved the crosshair back a few inches behind the shoulder. I fired, and immediately saw that my guess on the wind was insufficient. I saw the bullet strike the earth, missing the shoulder of the Blesbok by maybe a couple inches. 6 inches farther back and it would have been a clean kill. This was without a doubt a miss.

At the sound of the shot, the animals all started moving. I could see the herd buck. He was running slower than the others with his distinct stiff-legged gait and tossing his head. Another buck held back with him, and the thought passed in my head that I might have nicked him, but I knew I had missed. To be sure, we ran forward to see where he stood and to look for blood or hair. We did not finding any and started running while following the herd. Unknowingly, the herd was running right past our truck. My father was able to take several splendid pictures of the Springers and Blesbok as they went by.

By moving quickly and using angles to our advantage, Phillip and I were able to outflank the herd. By now, we had covered several kilometers on foot, and over half an hour had passed. We could see the buck, tossing his head as he trotted along, flanked by his younger male friend.

We found a good place to intercept the buck as he came around a corner created by the terrain. This time the distance was more like 135m with better wind angles. I prepared myself and took another shot. He went down instantly as my bullet crossed both shoulders and went through the chest. I had broken both front legs with the shot, but I had fired just a bit too low and forward to strike the heart. The damage was fatal, but not instantaneous. A couple of inches further back and I would not have needed to track the animal. I was a little too far forward and low in order to stop his heart.

I am a firm believer that hunters can always learn something new. With that thought in mind, I will share this next short story with you. I learned a new trick from my guide on this day in Africa. Phillip and I ran up on the buck and each of us grabbed the Blesbok’s head with one hand. Phillip produced a small fixed blade knife that he kept tucked between his shoulder blades. It is always there for him and is attached to the X in the middle of his binocular harness. Phillip plunged the blade down behind the base of the skull and the first vertebrae severing the spinal cord with the blade and the Blesbok expired instantly. We set the Blesbok up for the trophy pictures in a nice location and took some photos.

This hunt was a valuable experience and gave me some real insight into hunting in Africa. Even when you think you have all factors under control, inevitably something will still stack up against you and create a challenge for you to overcome. This is how character is built into a hunter over time. Hunting in Africa is dynamic, exciting, and requires a lot of movement. Each shot requires a lot of thought. I learned a lot from each of these situations and it has make me a more proficient African hunter.