Hunting Marksmanship in the Hills and Mountains 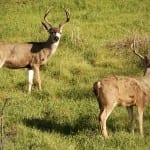 As I peered over the edge of the shelf on the side of Pyramid Mountain, I found what I had been looking for. My plan worked, I was finally above the orange colored Sitka Blacktail Buck that we had seen from below two hours earlier.  He had only fled around the side of the mountain and was easy to see in the emerald green colors of August on Kodiak Island. As I settled into a good sitting position and caught my breath, I started to get a little over confident. I thought about what an easy shot it would be as he never knew I was there. At the sound of the shot he just stood there and looked in all directions. I was lucky that the echo of the rifle shot was bouncing around through the valley and he wasn’t quite sure where it was coming from. How could I have missed? It should have been a piece cake to knock over my first Sitka at this distance.  Taking advantage of his confusion, it dawned on me what I had done. I lowered my point of aim and with the second shot flipped the buck sideways. I watched him tumble down the side of the mountain about 40 feet, before coming to rest against an alder.

The vast majority of us go through similar situations with our rifles. We take them to the range, shoot off a nice flat bench at a target with a predetermined range at a horizontal distance and declare ourselves ready to hunt. After the weapon is sighted in, what we really need to do, is stay away from the bench and only come back to it for verifying it’s zero. It’s a rare thing indeed to find an ideal bench in the field to shoot from. We need to become more familiar with our rifle by shooting from different positions at unknown distances to include uphill and downhill angles. For those of us who were trained in the military, we have some experience with at least shooting from different positions. But, I’ve never found a course taught by the military that teaches you about shooting at angles for the basic rifleman. I shoot with a few friends that are trained and qualified snipers. They taught me how to build a range card that I sketch out when I get into my stand. It gives me a reference to look back on when I need one. It includes distances, angles, terrain features and anything else prominent to help me make the shot.

I learned a valuable lesson that day on the side of Pyramid that I had never experienced before, shooting at an angle in the mountains. Even though that shot was diagonally about 140 yards, the horizontal distance was much less, probably closer to 75 yards. We don’t normally think about gravities affect on our bullet in the heat of the moment. But, if we practiced like we were going to hunt, then we probably would. When we shoot horizontally, gravity acts perpendicular to the bullet’s path and has a greater affect on the bullet. Think of it as having a full value or right angle wind on the bullet. If the wind were to shift and quarter towards or away from the bullet, then it has less affect on the bullet path. This would be the same when shooting uphill or downhill.

Now, how do you teach yourself to shoot better at uphill and downhill angles?  First, you need to know the ballistics of your weapon and ammunition choice intimately. You need to know, for your particular zero, where your bullet is every 5 to 10 yards or meters (whichever you prefer); all the way out to your effective range when shooting horizontally. There are several different ballistic programs that will help you determine that if you have the time. For ammunition and long enough range you actually shoot it and record it yourself.

I would recommend getting a laser range finder. It will tell you the angle and what the actual horizontal distance is, so you know where to aim at your intended target. Once you know your rifle/ammo ballistics, then you can put it to practice with the range finder. You’ll be amazed out how much better you shoot. If you practice enough you will get better and it will also become almost second nature in the field. I suggest using the range finder, if you have time. Or better yet, pre-range some distances that you think your game is likely to come out at. If you don’t have time to range it, at least you’ll know the general distance and angle. Nowadays, I have a ballistics card for each of my rifle/ammo combinations that I carry with me when I hunt. Sometimes I even tape it to the inside of the stock, where I can look at it at a quick glance without holding it or searching for it. By combining my ballistics card with my range card, I’m better prepared for those shots when they come.

Still another item you could invest in is a rifle scope with a mil dot reticle. This comes in handy for all types of hunting. But, it really comes into its own when it comes to long range shooting. Depending on the brand of scope you buy, you can get them where 1 mil equals either 1 yard at 1,000 yards or in metric instead. By knowing the height or width of the target, you can use the mil dots in the reticle to help you estimate the distance to your intended game.

Not long after I shot that Sitka buck, I was hunting the backside of Pyramid, with a group of friends. We had seen the back end of a buck go into a thicket of alders and devil’s club brush, which were about 30 yards wide and 70 yards long.  Since we were on a small knoll about 80 yards from where the buck went in, we could see the back of that thicket and knew the buck never came out. We decided we would post a hunter on each side of it where they could see the far end. Then, I began walking through trying to push the buck out for a shot. No sooner had I walked up to the edge of the thicket to begin the drive, a dark movement caught the corner of my right eye. As I scanned to see what the movement was, out popped a silver fox. It was a color phase of the red fox on Kodiak, that’s black with silver guard hair.

They are beautiful animals and I’ve never seen that color phase anywhere else. He ran across the small flat, out of the side of the thicket and up the side of the mountain to my right. I whistled at him to get him to stop. When he did, I held on him dead center like I was used to. And what happened when I fired? Yep, you guessed it! I shot over him. Fortunately for me, he turned his head and looked at the ground above him, where my bullet impacted and the dirt showered him. Realizing what I had done, I bolted another round in. I aimed low where I should have and drilled him through the ribs. I was a bit surprised though, when he still took off. He ran up hill about 15 feet, but then came tumbling back down. Oh and the buck? He still managed to give us the slip. Needless to say, I was not thrilled that I had forgotten to lower my aim. But, I was pleased I got the second shot, just like I did with the buck.

I try to practice shooting as if I am hunting, whenever it’s possible. You can’t always practice shooting at angles at most ranges. But, you can still practice different shooting positions; prone, sitting, kneeling, off-hand supported and off hand if the range rules allow. The more you practice, the more confident you will get with your rifle/scope/ammunition combination. Hopefully this helps you make that shot when the time comes and the big buck walks out above (or below) you. Some people might think that’s a lot of trouble to go through; all that practice, building a range card, ballistics card, using a range finder and so on. My only question to them is how badly do you want to make that shot? Not only do I take the shot to put meat on the table; I also believe out of respect to that animal, that I make the best shot possible for a quick kill. If I’m not comfortable with the shot, I won’t take it.