Hunting on the Edge 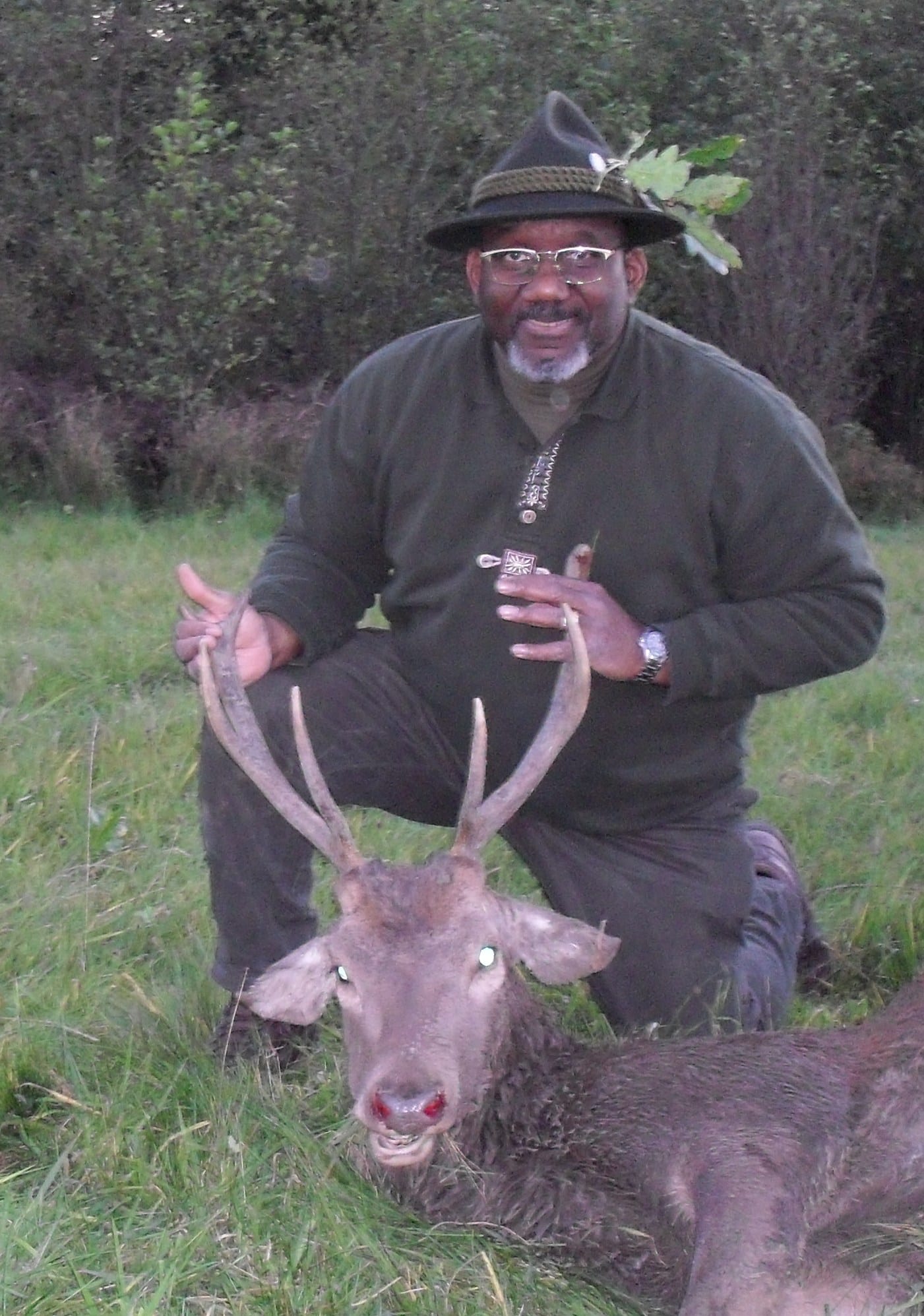 The Hunting trip started on 8 October 2011 in a forest on the Germany/Czechoslovakia (CZ) Border
with a party of six hunters. We had all gathered to hunt Sika deer, Roe deer
and wild boar. We hunted hard for three days, through rain, high winds and cold
temperatures.

On the last day at about 1700, I was finally able to glass a high-racked Sika buck, a shooter
for sure, in the distance. It was about 350 meters on the CZ Republic side of
the border, and coming my way. My Hochsitz (Hunting Stand) was about 6 meters
above the ground. The stand was 70 meters from the actual Germany/CZ Republic
border. I had an exceptional view of a 500 meter deep and wide open farm field
that connected to a 200-300 meters long wood line. It was a great setup for Sika
and Roe deer hunting.

Well, he kept moving closer and closer, then went down into a little depression which was
about 125 meters from the Ansitz. I could still see the tips of his antlers. I waited
for him to crest the top of the depression and come into Germany but the wind
was strong and twisting. As he came up, 120 meters from my stand, I got busted
by the wind! The Sika turned and went back into the small depression, then trotted
away. There was no shot and he was still on the CZ Republic side of the border.
It was a great encounter with a not so successful ending. But then again, that
is why it is called hunting.

During the first 3 days of the hunt the entire hunting party only took one Roe deer. After
the frustrating weekend, three of the party departed for home, but the other two
and I had also received an invitation to participate in the annual Hirsch (Red
Deer) hunting event in the US Army Europe training area, better known as Grafenwoehr
(Graf). This hunt is sponsored by the German Federal Forest Service each fall.
Every year 100 selected hunters are invited to a two-day Red Deer trophy hunt
in the military training area.

In Germany, hunting is surrounded by tradition and the opportunity to hunt the Hirsch is
not available to every hunter. Hirsh are the crowning animal of the European
hunting scene and are known as Hochwild (High Game). In earlier European
hunting history this animal was reserved for Royalty only to hunt. I was not going
to pass up an opportunity to hunt a Red Deer Stag.

I left the CZ border and headed for Graf. I arrived at 3 pm on the 11th of October 2010
and met several of my old German and American hunting friends. We all went
through the formal instruction process administered by the Bundesforst
Director.

Photograph – Bundesforst Director Maushake provides instruction on the procedures that will be followed while hunting. He is explaining the required etiquette for hunting at the NATO Hunt in the Grafenwoehr Training Area, 2010.

After the formal block of instruction I was assigned a hunting group. The group sizes
were 3 to 5 hunters with guides. I was ready to hunt now and needed only to
show that my rifle was zeroed. In Germany all weapons must be zeroes and
confirmed directly before a hunt when hunting on federal forest land. After
finishing up at the range, at about 5.30 pm, I headed with my guide for the Ansitz
(a low hunting stand made of wood) assigned to me that evening.

I drove with my guide to a location near the Ansitz. We stopped the vehicle about 300 meters short
and walked slowly through the forest toward the Ansitz location. When we got within
50 meters of the Ansitz we started to glass the clearing in front of the Ansitz.
We immediately identified that Red deer were already standing directly in front
of the Ansitz. The hunt had begun before we even made it to our hunting
location and we went into hunting mode.

We both got
down low and moved very slowly through the woods. As we got closer we looked
almost directly into the face of an Alttier, adult Female Hirsh, going into the
clearing in front of the Ansitz. We froze and thought we were busted. Luck was
on our side and she just walked on into the clearing and joined the rest of the
deer that were feeding there.

The time was getting critical and a lot of deer were flowing into the field. We had to make our
move now if we were going to do something positive with this deteriorating situation.
The wind was good but we knew if one of the deer caught our scent the hunt would
be over.

Knowing that we were late we got into a high crawl position, on hands and knees, and moved
slowly forward. As we gained ground on the deer we had to start to low crawl on
our stomachs in order to get to the Ansitz. The rut was in and luck was on our
side with the deer being too preoccupied with each other to notice our movement.

Suddenly, we noticed that about 20 meters to the right of the Ansitz stood a super four-year old 10 point Hirsh. He was feeding
and had not noticed us. We had crawled practically into the heard of Red deer. I
really wanted to take a shot at him but I could not get up in order to get steady
or get my rucksack into position to get a good shot without getting busted. The
monster Red deer started to walk away. First he provided a quartering away shot
and then straight away shot but my guide would not allow me to shoot because I
didn’t have a clear broadside shot. The rules are very specific on this hunt
and unless it is a sure thing, a shot will not be allowed.

After the deer got out of site and we could move, we low crawled to the small ridge behind the
Ansitz. We worked our way down toward it, opened the door and slowly got into
the stand. We immediately looked for the stag that we had just seen but he had
already disappeared into the forest.

After getting into the Ansitz, another Alttier with a calf came out of the forest. She walked
directly in front of us at about 160 meters. The wind was right which worked in
our advantage and soon we also spotted a very heavy 16 point Hirsch surrounded
by 9 cows and calves. No clear shot presented itself with the cows and calves
surrounding the stag. You could have cut the tension with a knife. As we sat
waiting for this monster to uncover from his herd, we heard a loud Hirsh roar
to our right at around 6 pm. There was another big fellow moving our way and as I turned my head to see if I could
spot him, there he was. An eight pointed Hirsh stood at the edge of the forest.

Now the adrenalin started flowing and I said, “That’s a nice buck”. “He is an old buck”
said my guide “you can take him if you want to”. Those words spurred more
adrenalin to enter my system as the moment of truth was upon me. My guide
added, “But make sure you have a good broadside before you shoot”.

I brought the rifle up and put the scope on him and my guide again said, “Don’t shoot
until you have a good broadside”. As luck would have it, he never gave me
a clear broadside shot. The Hirsh started to move toward the forest and I told
my guide that I was going to shoot him. This was a quartering away shot at 140
meters. I didn’t want to allow him, like the other stag, to walk into the woods
and disappear.

The guide asked, “This is a tough angle, are you sure?” and I replied that I could make the shot
and he said the magic word, “Shoot”. My Blaser R93, caliber 308 Win,
spoke and the bullet smacked the Hirsh behind the third rib on the left side. I
had calculated that the exit wound would be through the right shoulder. The
stag ran about 30 meters and stopped. He took two more steps and went down. As
he fell I said to my guide, “Venison for the freezer”.

Hunting on the edge means having the patience to wait for the
opportunity and the confidence to take the hard shot in order to be
successful.