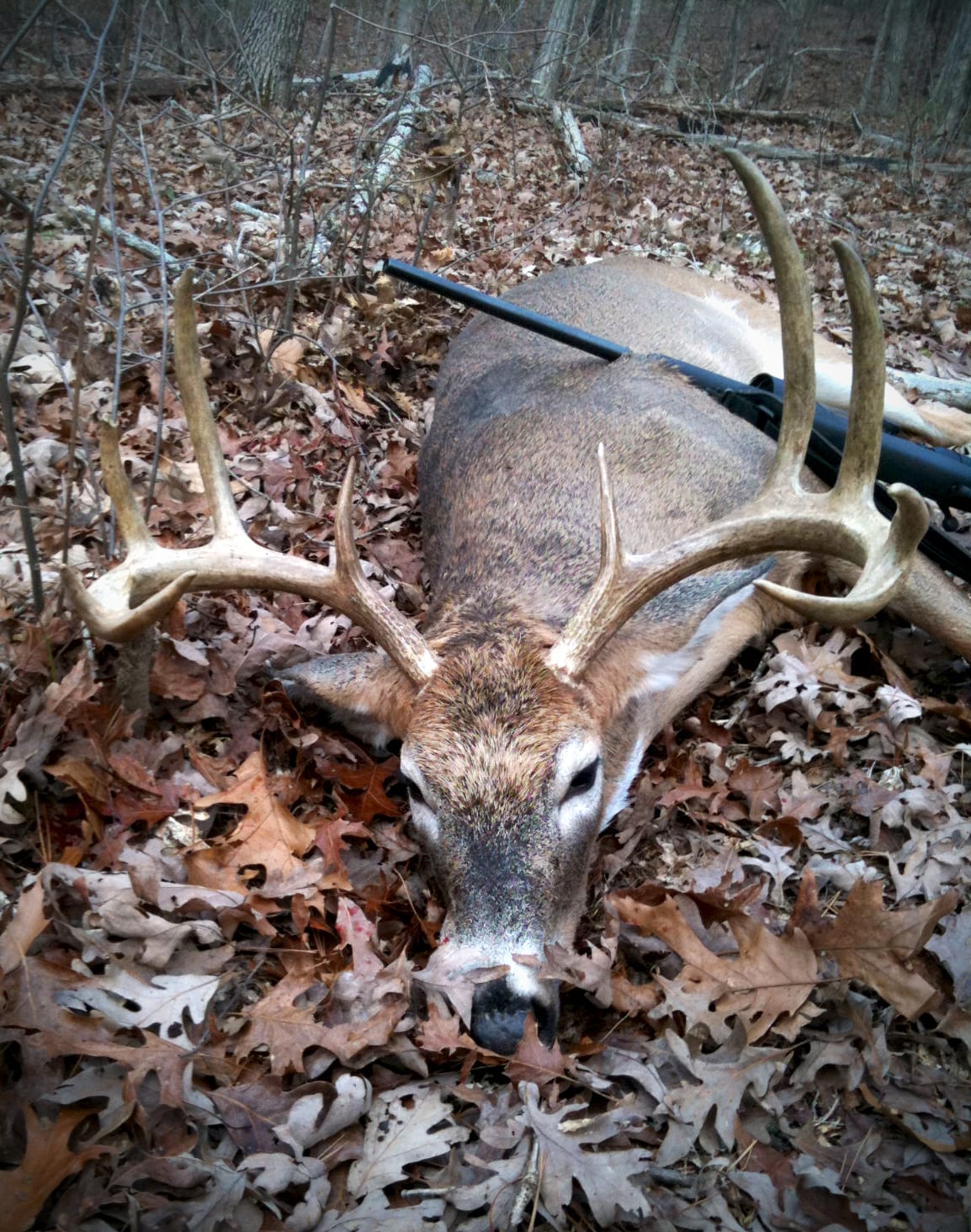 This year I lost my brother Scott Smith. He was more than my brother, he was my best friend and my hunting partner. It’s been a rough year to say the least, my brother Scott and I have known each other since we were 7 years old. We were born two months and three days apart in 1970. My mother married his father and since then we have been partners in crime and best friends.

We have been through many tough times together, like the time we saw a tunnel in the wall of a drainage ditch and followed it with flashlights until we reached a central junction. There was a ladder, built into the wall, so of course we had to see where it went. When we got to the top, it took both of us to push the cover up, and there we were smack dab in the middle of one of the busiest streets in St. Louis, with cars rushing all around!

When we got older I moved to Illinois with my father. There were times when we drifted apart, like through my marriage and his different relationships, but when the chips were down I knew I could count on him to have my back. So when ten years ago he was having a hard time and I had just gotten divorced, I gladly opened my home to him. Several nights a week we would sit on the front steps and talk for hours about hunting and dream about where we wanted to hunt when we got our lives back on track.

While he stayed with me, we hunted the little five acre farm we lived on. Eventually we moved to a small town, Benton Illinois, where he met a girl and moved out but that didn’t stop us from hunting every season and dreaming of someday having our own place to hunt.

I eventually moved from Illinois to Missouri and he shorty followed suit. He was from Mo, so he knew a lot of public ground and took me to his favorite places in southeastern Mo, which soon became mine as well. I took my best deer to date from the grounds he showed me, and we had the best deer camps down there that I have ever had. We hunted every deer season together and then added turkey as well. My first turkey came just minutes after he took his from the other side of the small farm we turkey hunted. I remember it like yesterday, we hunted a new area for turkey, it was a very wet spring and the place was flooded.

I set up on the south side of a small pond and had to wade through a small flooded field, to get to where I set up. As I sat there and called, a gobbler answered and we “talked” back and forth for the better part of forty five minutes. He just would not cross that flooded field. Little did I know my brother had circled around and was watching all this from a hillside overlooking the pond. He said it was one of the coolest things he’d ever watched as the turkey paced and gobbled and paced some more at the water’s edge but just would not cross that water.

Figure 1 “Photo” Stephen Reed’s brother, Scott, with 2 nice toms that they harvested together.

We always said that the woods were our church. The peace and quiet of the forest, as the world wakes up for another day, was a spiritual experience for us.

As time passed we still dreamed of that little parcel of land that we would lease or buy. A place we could hunt as a family and raise our kids to hunt on. To pass on the traditions in a safe place, the “S & R Ranch” as we jokingly called it.

But no matter where we hunted, whether together or miles apart, the woods always felt safe to me knowing he was there in those same woods and he had my back. That all I had to do was call and he was there, as any great hunting partner would be. Little did we realize time was running out on our dreams.

On July 4, I was visiting my father back in Illinois, like I always do, when I got a call from my brother at 6:00 in the morning. He was always up early. He was a roofer after all, but very seldom ever called me that early unless it was hunting season. I’ll never forget how time stopped as he told me, “I just got back from the hospital and I have lung cancer! I wanted to tell you first….” The minutes seemed like hours as I loaded up my truck and started the two hour trip back home. I came home to a subdued family and a fear I have never known. We hurried and set up chemotherapy and I was honored when he asked me to take him. Through his first treatment we passed the 5 hour long process talking about hunting and laughing about our past hunting successes and follies.

In the following days we discussed his options and found ourselves sitting on the front steps once again, talking about hunting this one last season.

He bought a crossbow and we made all the plans and discussed stand sites and locations, where the kids would hunt and where we would position the camper, all the things we wanted to do in our last season together. I made him a promise that I would take his sons and daughter to the woods with me every season and raise them up as he would and continue the tradition. I was honored that he would trust me with this task.

Then pneumonia hit and things started to spiral downward quickly. We had to cancel his third chemo treatment and moved him to the hospice home. Some dreams are meant to happen, some aren’t, but it’s our dreams that keep us going. We lost my brother on Aug 31. It was just seven short weeks after that fateful call on the morning he found out that he had cancer. One last hunting season was not meant to be…

In the months that followed I leased 80 acres, not far from the ground we both hunted and loved. I have been given a Pro-staff position with WILD Jaeger, something that he would have been so proud of. I have moved the camper and I am setting up stand sites and trail cams, and the like, not because I want to, but because I need to.

You see the woods for me, are no longer a place that I feel joy and safe. They are now a place that cause pain and sorrow, a place where I go and no longer see just the ghosts of the forest, as in the majestic wildlife that seems to appear right before my eyes when they were not there a second before. I also see the ghost of my brother, in the memories of past hunts and the dreams not realized. Hunts that he will not be a part of.

But there is something that keeps me moving forward, it’s the joy in the eyes of our sons as season gets closer. My nephew Ryan is very excited about this year and he is practicing so hard with his dad’s bow and getting to be a better shot every day.

Ryan is going to run the camera for us this year and take turns hunting and filming. Then there is my own son, Tyler, who is ready to hunt for his second year. He asks me daily to see the trail cam pictures again and has even started picking which deer is his. Scott would be so proud of them both.

I can almost hear Scott now saying to suck it up and get on with my life and train these boys up right! He would tell me to stop with all the sappy nonsense and get back in the grove. And I will, and I am, but the woods will never be the same without him. I will never feel as safe as I was when I knew he was there and he had my back.

I will find my grove and I will teach our kids to love and respect the outdoors just like he did. I will do it gladly because this is still my passion. For now though, I do it because I need to and because that’s what he asked, and would want me to. I know in time the pain will lessen and the feelings of loss will fade and the new memories made with my nephews and nieces, and my own son, will fill the emptiness I feel.

I look forward to those days. I can’t wait for the days when I can be there to witness his children taking their first animal, knowing he is looking down and smiling – at both me and them. This year just may be that year, Ryan has never taken a deer and the new property looks promising. He has already taken a turkey, a nice Jake with a double beard, but still desperately wants to take his first deer.

Then there are his four-year-old twins, Jake and Katie. I look forward to the coming years as we manage this property. They should have many, many opportunities to take their first deer and turkeys. I can’t wait to see them learn the respect and admiration for the outdoors that their father had and teach them to hunt if they want to learn. My son already talks about his hunting trips and how he is going to kill a bigger deer than mine, and I hope he does. He is looking forward to camping and hunting with his cousins and to be honest so am I, so for now I continue to go through the motions and set up this property, as hard as it is, without my brother, so that our dreams from the past come to pass in the future, and the cherished hunting memories that we shared as brothers will be repeated in the lives of our children.

As I write this my nephew Ryan is making a wooden plaque in his high school shop class. He was inspired by the stories I told him of his father and knowing how much Scott would have loved this property as it was a dream of his as well. I’m sure I’ll be fighting back the tears as we hang it on the fence post before season starts this year, but everyone that comes to visit our little deer camp will see it and read “S & R Ranch Where dreams come true.” I am sure I will miss him more as the season progresses and as the years pass but I will take pride in knowing that in passing on our traditions to our children, I will keep him alive not only in our memories but also in our expectations of great things to come.

Figure 2 “Photo” A deer that Stephen Reed harvested on the property that he and his brother Scott dreamed about. Stephen thinks of Scott, and their time together, everytime he steps foot on that property.