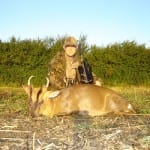 Colouring being a russet like brown in their summer coat turning to a darker brown in their winter coat. Bucks have long pedicles with short antlers, casting May to July and growing new ones over the summer. They have large visable canine tusks. Although they do not grow to the size of Chinese water deer canines. Both bucks and does have very large facial (sub orbital) glands below the eyes. They have a short, fairly wide tail which is held erect when disturbed.

Muntjac have proved very succesful in establishing themselves in British countryside. Muntjac populations can reach very high densities and can cause a lot of damage and impact on ground flora. They were originally residents of decidous and coniferous woodland; spreading across farmland, but are now also found in urban areas and gardens.

Nature Status: Muntjac are classified as invasive non-native species in Britain and their release into the wild is prohibited under section 9 of the Wildlife and Countryside Act 1981.

Notes:  Muntjac differs from all other species of deer in Britain. There is no defined breeding season or rut like other deer. They are
capable of breeding from 8 months old. Gestation period is 7 months, normally giving birth to 1 kid. They are able to conceive just days after giving birth.  When culling doe’s, heavily pregnant doe’s should be selected, this ensures there is no dependent kid will be orphaned.