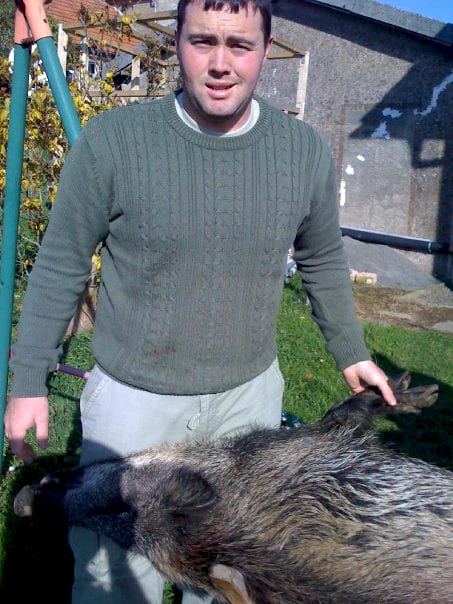 It was late July and I was hunting over a 20 acre wheat field. It had been raining all day, not a heavy rain, just a very light drizzle. I got to the stand early like I always do. I took my gear out of my rucksack and removed my gun sling, so it would not make any noise when the pigs came by. Then I loaded up my CZ 30-06 with the mighty 180gr Partitions. During the walk in, I noticed a lot of the wheat was missing from the top. The wheat was just turning milky, numerous deer and pigs had trails going in and out of the wheat. A heavy fog came rolling in from out of nowhere. I got the green light to shoot anything that had an open Jagdzeit (open season).

Figure 1 “Photo” Chris Norris with a Wildschwein (wild boar). Chris is a pig hunter by trade, but he still likes to get out and hunt other game once in a while.

Once I got my gear set up, I started ranging the areas where I might have a possible shot. 240 meters to the front, 75 meters to my left (Kirrung at 35 meters) and 40 meters to my right. After all this, which took a matter of minutes, I began what I thought would be a long wait. It only took about 20 minutes before the first Roe Buck came by. He came out of the wood line wide open into the wheat. I picked up my Zeiss binoculars and studied the buck. It was a two or three year old Gabler (4 point) that had another two years before he needed to be culled out. As the binoculars dropped from my eyes, I noticed two Damwild, game a lot larger than a Rehwild with big white spots and a good set of spikes sitting pretty between their ears. It was then that my heart started to jump out of my chest and beat faster like it does, almost every time I know I’m going to be pulling the trigger. I picked up my Nikon Range finder and glazed them, 214 meters at a slight downhill. They were headed slightly away from me and showed no sign of stopping.

It was then I noticed 4 other Rehwild in the wheat field to my left. I had very little choice, if I wanted these Damwild; I was going to have to stalk them. I quickly put my sling on and threw my range finder around my neck. I silently exited the stand to my right and stepped directly into the wheat field. Quickly but carefully, I looked around as to not alert the Reh and started after the Dams thru the wheat. Keep in mind, it had been raining and I was walking through a wheat field with no Gore-Tex or rubber boots. I was soaked from the beltline to the toes the first 10 meters into the stalk. I had very good wind so I wasn’t too concerned about the Reh picking up my scent. Very cautiously I picked up the pace, having to make up the distance quickly. I got within of 130 meters, when they darted straight up the hill away from me into the woods. I can’t even spell some of the things I was mumbling under my breath. I just sat down in the wheat and laid my rifle over my lap. There I was, soaked, cold and empty handed.

When I looked up, I saw him! He stepped out from the pines into the pipe line. I ranged him at 190 meters, thinking to myself it’s now or never. I got in a comfortable position and brought my rifle up. He was at an angle where his head was slightly toward me. I steadied my shot and squeezed the trigger until I felt the buck of the rifle. I racked another round out of instinct and as soon as I got back on him, he disappeared into the pines again. I sat there playing the shot over and over again in my head. I was trying to remember if the animal showed any sign of a hit, like jumping, spinning or even bucking, I was not sure. I waited 10 minutes then I went to look for blood (Schweis). I saw where he ran, the grass was flattened and he shook the rain from the bushes. When I got closer, I saw the red glow of blood. I got somewhat scared when I only saw small blotches of light colored blood. There was no sign of lung tissue or dark blood from the liver.

I dug out my now soaked cell phone and called my buddy to bring out his Jagdterrior. When he arrived we put the dog on the line and he immediately took off down the trail. At about 40 meters with a spotlight I scanned ahead of the dog, like I usually do, and I saw the Hirsch try to pick his head up. I stopped my friend and took 2 to 3 steps in front of the dog and put a round of -06 in his neck. After rewarding the dog I went to look at my animal. My first shot hit him 2 ribs in and exited out the other side last rib. I began the fun task of field dressing him. No lungs or liver were damaged so I was extremely lucky he laid down so close to the first shot, he could have run for miles. Once we got him dressed I bent over to pick up his front legs to put him in my vehicle. It was then I had a sudden pain in my backside. I thought my buddy was just messing around until it hurt so damn bad I had to jump and look around, only to see his terrier hanging from my butt. You guessed it the terrier had taken a bite out of my backside. After I got him off, I started chewing my friend out for having such a crazy dog. (Don’t worry no animals was harmed in the making of this story besides the Damwild!) That is when he said, “Well, you touched his animal!” something l will never forget and would recommend you remember it too. I almost hit him until I thought about it; he did find the Damwild so in some way it was his.

We got the Hirsch back to the camp and hung him up to wash him off before he went in the fridge. That’s when I inspected my backside. It wasn’t as bad as it felt for sure but, it still hurt like the dickens. Moral of the story: When a piece of game is on the ground and hunting dogs are around, don’t put your hands or backside in their way!

Figure 3 “Photo” The Jagdterrier, with his quarry, and that let Chris know who it belonged to!