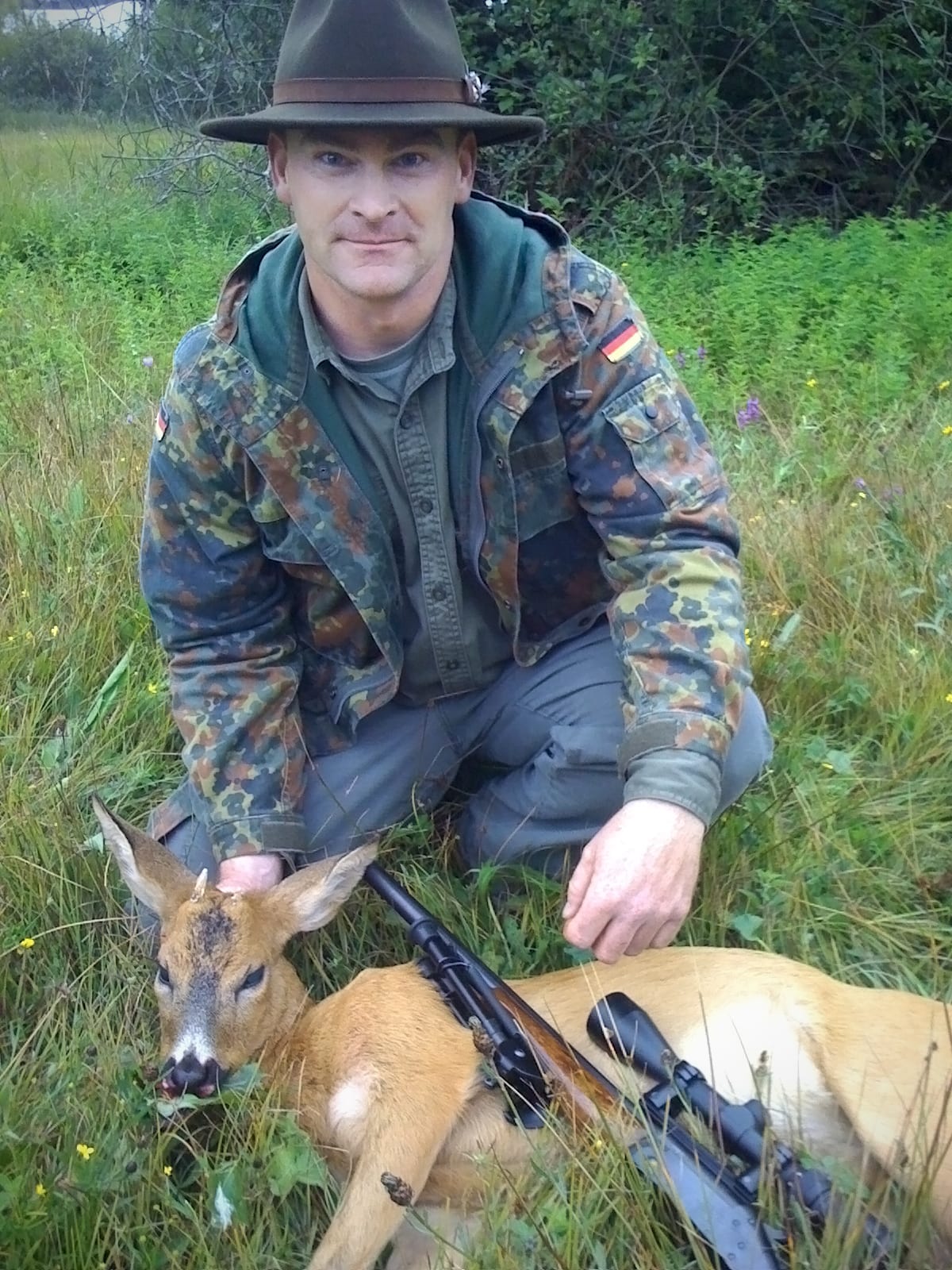 I could not be happier with my first Rehbock (Roe Deer buck) harvested in Germany. The bock was 3 to 4 years old weighing 17.5 kilos with a very atypical set of antlers, one side 5 cm long and the other barely 2 cm long. The taking of this buck fits into the true spirit of hunting in Germany; he was a true abschuss bock (cull buck) in need of harvesting. This buck was an abschuss bock; but he was not even the original buck the Jagd Revier (hunting lease) owner wanted taken. Also, in the spirit of German hunting, my fellow WILD Jaeger Pro Staff member, Chris Norris, helped to set up this opportunity and accompanied me on the hunt per the actual revier owner’s request. As this was my first time hunting on this particular Revier, it was only natural he would request this of a first time guest like myself.

The Revier owner put us in a Kanzel (Box/Texas blind) with a specific little button bock in mind for harvesting, but any bock other than a Sechser (Six point) would be acceptable. In his instructions he explained that the button buck would be hard to distinguish from a Schmalreh (yearling doe). This is significant information as it is very important for hunting in Germany. One must be very sure of your shot placement, age, and sex or you keep your trigger finger straight. But I digress, the Jagdpächter, Revier owner, walked us out to the Kanzel giving further instructions and also giving us the avenues the game prefer for that kanzel. Chris and I positioned ourselves in the kanzel. As I shoot left handed, I went in first and sat on the left hand side of the seat, this allowed me the best shooting position in covering from the front to the right side of the kanzel. Of course this gave Chris the best position for shooting from the front to the left.

Once in place Chris and I didn’t have long to wait for wild game to come out. Five minutes after we climbed into the seat a Geiss (doe) walked out of the tree line to the left at about 170 meters. She proceeded to browse along the path passing behind the Kanzel. In the process of looking the Geiss over, Chris noticed a fox stick his head out of a stand of bushes to the right front of the Kanzel. The controversy starts, twenty minutes after we lost sight of the Geiss, and I observed a Reh to left front of the Kanzel. This was in the same general area as the first Reh. Having plenty of time to scrutinize this Reh, (it even turned its body completely around multiple times during feeding) we could not agree on the gender of this Reh or if it was a button buck. Chris and I discussed the different criteria required to identify the gender of this Reh, the size, the head, the hungry hole, Spiegel, Pensel, and genitals. Appling these criteria to this Reh became difficult because it didn’t overtly display any one outstanding trait. Chris felt it was a button bock but was not sure enough for a shot and I felt it was a Schmalreh. We could not come to a consensus on the gender so I
kept my trigger finger straight.

During the debate over the Reh, we were tracking some movement noises to the front of the Kanzel which could have also been the button bock. Chris spotted a Reh in the gap between previously mentioned bushes with the fox and the tree line directly in front of the Kanzel. The gender of the Reh couldn’t be determined looking through the tall grass and limited gap. The Reh grazed and went to the right of the bushes and out in the open. I took up a good shooting position. As the Reh exited cover he had his head down in the grass so I was unable to see antlers. As the Reh lifted its head to look around (with Chris on his binoculars and I on my riflescope) we identified the Rehbock at almost the same time. The rehbock was acceptable to shoot. This is where plenty of range time paid off, it seemed like my shot was all automatic and I took my shot. The Rehbock disappeared from my riflescope I assumed he ran off but then noticed he was lying right on the spot where I shot him. Reloading and then staying on the rifle observing for about five minutes, we watched looking for any signs that he would get up and run off. Chris and I waited a further 20 minutes before approaching the Rehbock which helped to ensure the animal was down.

This being my very first harvest of European Roe deer I was extremely happy with it. I was overjoyed, not only because it was my first deer harvest in Germany with excellent shot placement, but because it fell in line with the spirit of species management of the German hunting system. I would like to recognize Chris Norris, my fellow WILD Jaeger for setting this opportunity up for me and his Jagdpächter for allowing me to take one of his beautiful animals. I am grateful to them both and give them many thanks for this opportunity. Each opportunity I get to hunt, whether successful or not, is a good day. I look forward to each and every good day given to me.