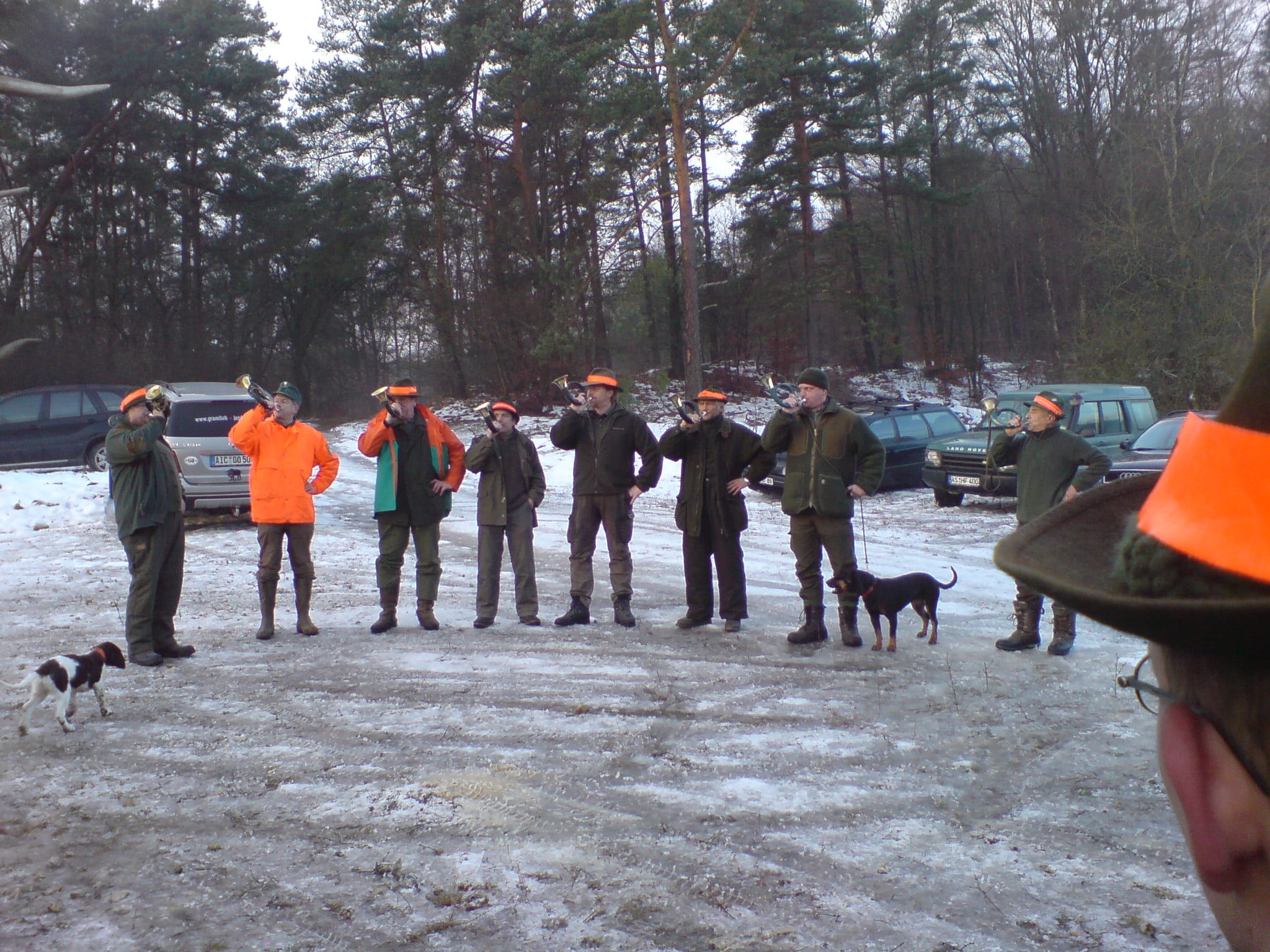 In November 2006, I took the hunter’s safety course in Heidelberg, Germany. Time and circumstances kept me from hunting until fall 2008. I took a couple trips to Grafenwoehr and Hohenfels to hunt Rehwild (Roe Deer). My first hunt was on a private Revier near Grafenwoehr. Despite a good setup, we just didn’t see any deer. Another hunter lucked out and took two. That’s hunting!

When I went to Hohenfels, one of the American training ranges located in the state of Bavaria in Germany, I gained some valuable experience. It was the 5th of December 2008, Red Deer
(Rothirsch) were on the menu as well as Rehwild (Roe deer). Rehbock were out of season since mid-October, so we were hunting for Rehgeiß, Schmalreh and Kitz (does, young does without fawns and fawns). This would be a challenge for me, because it’s hard to estimate the size of an animal when you have never seen them through your scope before.

We gathered at the gate at Hohenfels. There were many German hunters who paid for the chance to hunt here. The Rothirsch at Hohenfels were well known for being big, strong and healthy because they were well protected on the American training ranges. Plenty of forage and no predation meant that hunting was necessary to keep the populations managed.
Being large also meant trophy fees were expensive. It would be easy to pay the equivalent of a nice used car for some of the larger bulls.

We drove to the hunting lodge on post, and gathered for a briefing on what the hunting rules were for the day. Our Jagdschein (hunting license) and insurance papers were checked. Rules were given for what we could and could not shoot, and example sets of antlers were shown to us. We could not shoot crown Hirsch (12 points on the American system) and once again
we were told that Rehbock was not in season.

Jagdblasers blew several songs on their Jagdhorner, accompanied humorously by howling dogs who wanted to sing along with the horns. The Jagermeister set the timetable for when we were to go out to start the hunt, when the lunch pause would be and when we were to return. Finally, we were assigned our treestands and we headed out.

Jagdblasers blew several songs on their Jagdhorner, accompanied humorously by howling dogs who wanted to sing along with the horns. The Jagermeister set the timetable for when we were to go out to start the hunt, when the lunch pause would be and when we were to return. Finally, we were assigned our treestands and we headed out.

Figure 1 “Photo” Tradition and culture are all part of the experience of hunting in Europe (specifically Germany). The Jagdblaser signal the phases of the hunt as they have done for hundreds of years.

I was situated in a low stand located about 700 meters from a helicopter landing area. UH-1 Hueys were practicing dust-offs all day, so it was noisy. That didn’t seem to bother the deer, as they appeared to have grown used to the noise. They weren’t afraid of tactical vehicles, but ran at the sight of a civilian car.

I was sitting in a low, open topped stand, low enough so that if they had wanted to, the deer could have nibbled on the toes of my boots. In front of me was a small meadow, maybe 50 meters deep and 100 meters wide, which sat in the middle of lightly forested areas. Numerous vehicle trails criss crossed the area, and these were used extensively by the deer and pigs.

Figure 2 “Photo” The view from Robert Hembrook’s treestand on one of his first Roe Deer hunts in Hohenfels, Germany (2008).

Fairly early on, I saw a brief glimpse of a Reh slinking along one of the trails, but it was nowhere near enough of a look to take a shot. I tracked where I thought it would pop out of the woods at another clearing, but I guess she changed directions and disappeared.

A while later, as the afternoon began to wind down I spotted another Rehgeiß (Roe deer doe). She stuck her head out from the cover and was waiting to cross a trail. She waited a long time, which showed she was a mature animal. I was armed with my Savage 116 FSAK Weather Warrior, which features long action, stainless steel metalwork and a black plastic
stock. The barrel is a heavy sporter contour with flutes, and has an adjustable muzzle brake that can be turned to the open position for recoil reduction (but with significant muzzle blast), or turned off to keep the noise down. Chambered in .30-06, I loaded it with Federal 180 grain Power-Shok soft point bullets. Topping it in Leupold QR rings was a Bushnell Elite 6500 2.5 – 16x 50mm scope.

Seeing the deer, I slowly aimed at her, and then gradually brought the magnification up from 2.5x (where I keep it for wide field of view) up over 10 power towards 16. This let me study the deer, now 100 meters away, in close detail. She had the gray pelt of an older deer as well as the slightly “pot bellied” look that older Reh get. As I watched her, she looked directly at my stand. I was wearing green trousers and a “Real Tree” pattern rain coat, and she looked right at me and then away. I moved slightly to adjust the scope, and she glanced back at me and then looked away again. It was interesting to have that connection to the animal, watching her watching me. It was also a good chance to see just how much movement I could get away
with before she spooked.

Seeing her, even with decades of hunting behind me, I began to suffer a bit of “buck fever.” I had a racing heart, adrenaline flow, and rapid breathing. I mentally challenged my body to calm itself, and practiced deep, slow breathing to slow my heart and stop the race. This (mostly) accomplished, I could concentrate on my sight picture.

I had a nice shoulder shot, slightly quartering. The bullet would take the nearside lung and the heart, and would be terminal instantly on such a small animal. Legal minimum for Reh in Germany is a .22 center fire, so with the .30-06 I was packing considerably more energy than I needed, but I believe in a quick, clean kill.

So I had to make a choice. This late in the year, the bucks had already lost their antlers. So was I looking at an older female or an antlerless buck? I weighed my options and chose to hold my fire. Sometimes the best choice to make is to not shoot. You can never call a bullet back, so it’s best not to pull the trigger until you are absolutely sure that this is the animal that you want. In the end, I elected to pass on the shot, and after several minutes of watching, the Geiss jumped across the road alone and trotted off into the forest. I didn’t get a deer, but I got a lot from that hunt. That was what mattered to me the most at the time.

In the end, one of my friends from Stuttgart who was on the hunt was able to score a female red deer and a Rehkitz. Lucky for him! He was in the adjoining stand, so it’s just luck of the draw. I helped him dress out his kills as we waited for the Forstmeisters to come with their quad to take the carcasses away.

When hunting was complete, we headed back to the Streckanlage, where the day’s kills were laid out. Many people got lucky, and could be seen with pine branches stuck in the bands of their hats as a symbol of their success. 3 Hirsch stags were taken as well as around a dozen and a half females and kitz. There were half a dozen Reh and a dozen pigs (Wildschwein). The animals were laid out in priority by rank (Hirsch higher in rank than Reh) and a toast was made to the animals, as well as Jagdhorn calls to honor the dead animals. The hunter with the most kills was crowned “Jagdkoenig” (Hunter king) and received a prize of some sort, typically a knife or a bottle of spirits.

After the ceremonies, it was time to head home.

It was not a bad drive home, and I felt like I was a part of the German hunting community. That’s what was important.

Figure 3 “Photo” “The Strecke” from Robert Hembrook’s Hohenfels, Germany hunt. He did not have an animal in the Strecke, but he felt like part of the group of hunters, and that was what made the experience special.

Figure 4 “Photo” The successful hunters received their shooting branch which they place in their hats to show that success.