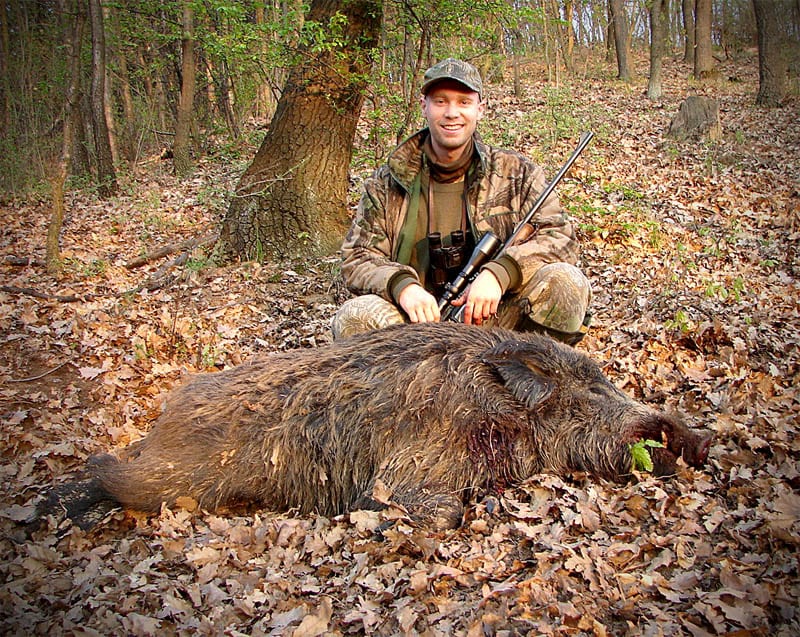 I was born in October 1981 in Budapest, the capital of Hungary. My father was a professional hunter at the time. I grew up in a family, where hunting was not just a leisure activity; it was work and a lifestyle choice. I traveled with my father on different hunting trips and learned the basics of hunting in the field. At the age of 8, I shot my first 12 gauge shotgun. By age 12, I had hunted sparrows at my parents’ house with my father’s old air gun.  My mother also became a hunter around this time.

As I child, I always wanted to be a professional hunter like my father. But he knew that it was very hard to earn a living as a professional hunter in Hungary. When I was 12, I got my first wild pig and red deer doe at the same time. I took a German Nationality class at the elementary school, and continued learning at the German Nationality Grammar School. My father was member of a hunting club (not as a professional but as a sports-hunter) in southwest Hungary. As a teenager, I was often hunting with my father in this territory, and had plenty of beautiful hunting experiences.

By this time, my family owned a hunting house in northeastern Hungary. My father was a founding member of the local hunting club, and we spent a lot of time there. It was a huge 6400 acre territory with a big population of red deer, wild boar, roe deer and mouflon. At the age of 18, I attained a Hungarian hunting license and got my first shotgun and rifle.

My family handcraft’s exclusive hunting equipment such as knives and leather accessories. As a teenager, I was in the workshop learning the skills of hand crafting hunting accessories. After the borders of Hungary opened in 1989, we sold our products at different fairs and hunting expos in Western Europe like the Jaspowa in Vienna, the Die Hohe Jagd in Salzburg, the Jagd und Hund in Dortmund, the IWA in Nürnberg, etc. As I visited these expos, I had a lot of opportunity to practice the German and English language, and get a wider view of the hunting culture of Europe.

In the last 20 years, my family managed to make a name for themselves with their handcrafted items in the hunting community. As a result of over 20 years of work, we have made a lot of valuable and deep friendships among hunters all around the world. We have met a number of African outfitters, and in 1995 started to organize hunting trips to South Africa, Namibia and Zimbabwe.

For the last 15 years, we have helped many Hungarian hunters enjoy participating on an African safari. I first traveled to South Africa at the age of 16 to be a guide and translate for Hungarian hunters. On this first trip, I managed to shoot a warthog and a nice impala. On my second trip in 2000, I shot a big kudu, two oryx, a steenbok, a duiker and warthog. I traveled to southern Africa in 2002, 2003 and 2006 and got almost all of the plains game. My dream is to shoot a water buffalo in the future.

As a result of the recognition from the hunting community, we received a lot of offers from companies to represent them in the Hungarian market. In 2005, we decided to establish a company for trading hunting equipment. Our main partner became Eurohunt Germany, which is a fast growing trading company located in Germany.

After finishing grammar school, I attended the ELTE University and became a German language teacher. After graduation, I visited the Corvinus University where I studied international relations.

When I was 20 years old, I attained the Hungarian bowhunting license, although I didn’t have much opportunity to practice bowhunting. I think that bowhunting is the most challenging because you need to have skills and patience. Bowhunting is growing very fast in Hungary, and in most European countries.

My favorite way of hunting is stalking. But, I also like to sit in a high stand, where you can enjoy nature and really observe the landscape, game and plants. I also relish drive hunting which has a great tradition in Hungary. I take part on 4-5 driven hunts a season in various territories. My favorite species is wild boar. I have plenty of nice trophies. The biggest wild boar I took achieved silver with 116.9 CIC points.

In the last few years, I have discovered fishing. This year there are a lot of opportunities available for me to get acquainted with Hungarian fishing possibilities.