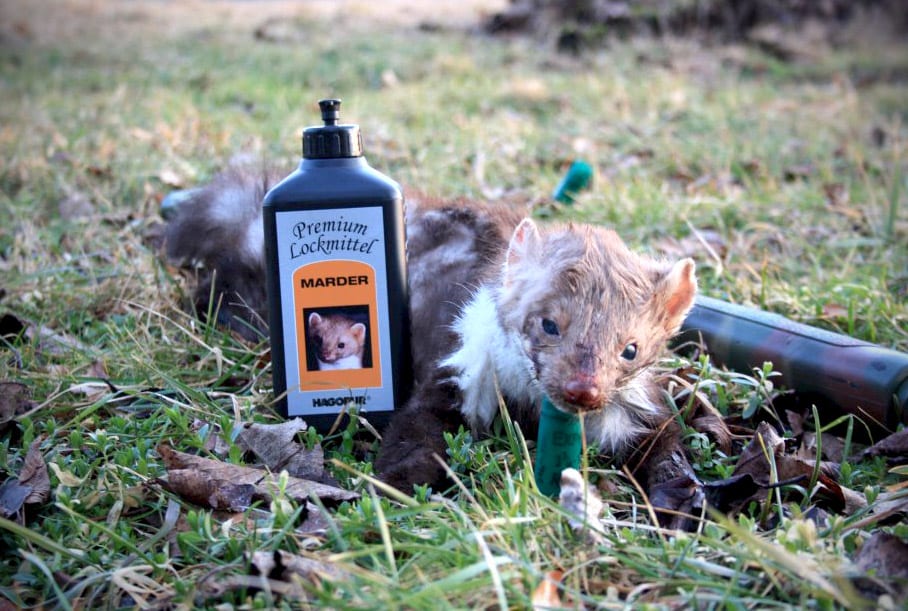 Appearance:
The fur of the pine marten is medium, discolored to a dark brown. One of the most typical features is its yellowish throat patch giving it the nickname “Golden Throats” and its hairy paw. It has relatively large, yellow-rimmed ears and a dark brown nose.

Nutrition and Behavior:
The pine marten hunts small mammals and as a predator it prefers mice, squirrels, young rabbits, birds, insects, amphibians, reptiles and bird eggs. It also eats small fruits such as blackberries, rowan berries, rosehips, and also carrion. The pine marten kills its prey usually with a neck bite. However, it does not immediately consume it, but carries it first into a tree, where it then picks at the remains.

They avoid open areas and roam the woods and along hedgerows, they are nocturnal animals and tend to be active in the twilight. It likes to take over fallen trees near creeks as a home. They usually stay with the same tree or move to another similar to this.

The Pine Marten is an experienced climber and can jump very well. They jump, fly and can escape squirrels in the trees, often with little difficulty. Pine martens have superior climbing and jumping abilities compared to all other European mammals. Their leaps can be up to more than 4 meters. They can also head run on the trunks and branches with the smallest support.

At night they like to sleep in protected areas of the trees. Like the Kobel squirrels, they can stay in empty tree hollows or nests of birds of prey. They also like to stay in abandoned barns or suspended under fallen trees. The pine marten does not hibernate. Their thick fur protects them from the cold and their victims are particularly at risk in the winter, because they have a reduced flight distance.

Like most members of the weasel family, the pine marten lives mostly alone. Their territories are bordered with scent marks from their movement to and from where they sleep. These grades are characterized by their repeatedly used paths, the so-called “raccoon passes”.

Reproduction and Development:
July / August is mating season (rut). At that time, the pine marten rage often screaming and roaring through the trees. Their nest is usually located in abandoned Kobel squirrel nests. After an 8 month gestation period in early March / April, 3 to 6 young are born. Similar to the deer or badger’s gestation period, there is a period of dormancy. They are initially about 8 – 10 cm tall. The newly-born pine martens are blind and can see only after about 5 weeks. The martens are weaned at 6 weeks and then go with the mother on the hunt. The females tend to the young males till their second year. Only in the second year do pine martens reach sexual maturity.

Figure 2 “Photo” Stefan Pfadenhauer with a Stone Marten that he harvested with his Remington 870, 12 guage shotgun, on 19 Feb 2012.

Types of hunting:
Harvesting Martens for their fur: The female pine marten is the best for recovery of the hide.

One can use traps or pine marten’s can be killed with a shotgun. (Please note the national regulations). Use of rifles to harvest pine martens destroys to much of the animal. Use of a shotgun with pellets is much better.

In the winter snow, you can follow the tracks of the pine marten and track the pine marten to their lair. Once you find the lair, you still have to figure out how to get it out.

Note: Check local regulations for hunting seasons in each country!