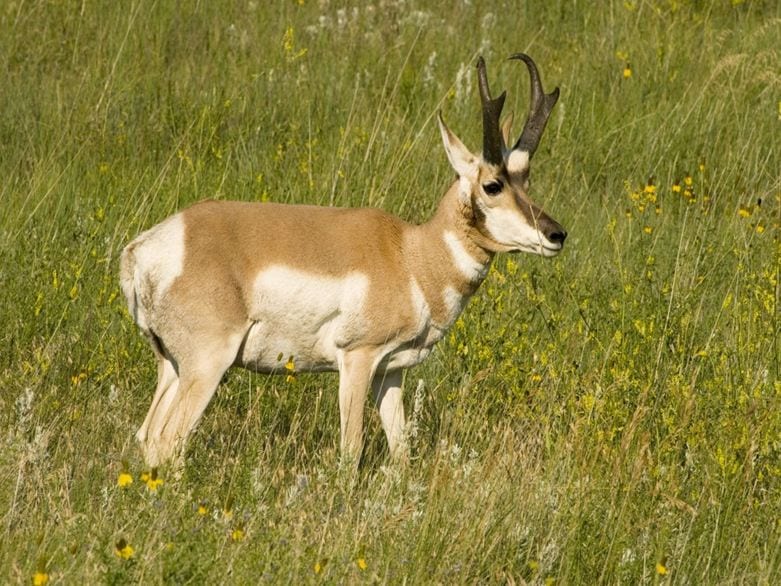 The dessert goat of the American western plains. Though not scientifically an antelope, nor does it look like a goat, its physical characteristic of being an antelope gave its name as the Latin name Antilo=Antelope and Capra=Goat. The Pronghorn Antelope is mostly diurnal being more active in the morning and evening. This animal is a true American, found nowhere else in the world, there are subspecies of this antelope and 3 of them are found in Arizona.

Figure 1 “Photo” An Antelope in it’s natural setting – One of the fastest land mammal’s out there, this open plains loving creature has the eyesight of a hawk, and can spot you miles away, with its adapted speed. It’s a no brainer that it’s one of the most challenging animals to take in North America. Want to make it harder, try going after one of these with a bow and test your skills!

The Antelope has been clocked over 70 mph in a sprint, the fastest mammal in North America, with a large windpipe, heart and lungs it’s no wonder they can average over 40 mph easily for several miles, both sexes have horns with the average for bucks going between 12-18 inches anything longer would more than likely make books. The does average horns are around 4 inches and the main characteristic separating the buck and doe is that the buck has longer horns and a dark cheek patch on both sides of the face.

Nature Status: Only the subspecies Sonoran Antelope is endangered. High conservation efforts are being made throughout the western United States through state wildlife management programs which have kept this wild game’s numbers high.

Predators: Wolves, Mountain lions, coyotes, bears, and wild dogs are some of the predators to this animal. Slow moving predators will usually prey on fawns hiding in the meadows and tall grasses.

Life Span: Age ranges from 9-10 years in the wild.

Future: Maintaining natural habitat for this animal is a priority issue for management. The expansion of civilization and domestic cattle farming has pressured this game to compete with other domestic animals for food. Man-made obstacles such as fences for cattle and cattle guards have also taken a toll on them. Antelope will not jump over fences but prefer to go under them or around them and some have even strangled themselves on these fences trying to escape from predators.

Figure 2 “Photo” Dason Lasater and an Antelope that he harvested in Idaho, USA.

Rifles: Most hunters have used everything from lever actions to bolt, single shots or muzzleloaders; most popular are bolt actions for quick follow on shots.

Optics: High quality optics with a large range to glass the open meadows, most hunters opt a good 10x binoculars with a 4-16x50mm scope to reach out there.

Notes: Breeding is between August and September and most bow hunters have used decoys to successfully lure big mature bucks within bow range, check your states rules governing the use of decoys.

Method: Stalking to a preferred shooting range for bow hunters, over waterholes, as well as glass and stalk are the means for rifle hunters as well.