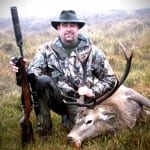 A close cousin of the Wapiti or American Elk, Russian Maral, and Sika. Red deer have been exported around the world as “Exotics” from New Zealand to Missouri. They originated in Europe. There are large populations across the globe. The largest native herds with the best trophy quality are found in Germany, Hungary, and Romania with Scotland being a close third, for a smaller antler size, but the most fantastic stalking experience. The animals do equally well in parks as well as heavily forested wild lands. They have been kept on farms and estates, starting with the ancient Romans to the modern day nobility of the United Kingdom such as the Duke of Bedford.

Nature Status: Although large populations exist in some areas, and the red deer is listed overall as least concern by the International Union for Conservation of Nature (IUCN); there are many historical areas where there are few if none wild found. Few natural predators exist within the same biotopes of Europe: the majority of bears, wolves and big cats have been eradicated in Western Europe. But, in places like Croatia, Romania and into Russia, the wolf and bear are still found preying on the red deer.

Life Span: Average life span is between 10-13 years in the wild with zoo specimens surviving up to 15 years.

Habitat: Red deer live in forested areas and mountainous terrain in the Highlands, Tatras, or the Carpathians. But, they can also be found in forested meadows of central Europe to exotic game farms of Texas.

Hunting: Mornings and late afternoons are the most successful time to hunt as the deer browse with noon being a resting period.

Figure 2 “Photo” Mathew and his Red Stag harvested in Scotland.

Most sought after of the European game animals. Native to Europe.

Archery: Although archery hunting may be prohibited in some European countries, in the US compound bows with a legal minimum of 35-40 lb. draw weight is required. Crossbows for seniors and disabled hunters with a minimum draw weight of 25 lbs. Broadheads with a minimum 7/8-1”inch cutting diameter.

Optics: High quality optics with a medium magnification to allow for medium range shots in low light condition; 7×50 or 8×56. Spotting scope and a laser range finder are recommended in New Zealand or Scotland.

Notes: Breeding season known as the “Rut” is late fall to early winter depending in the Northern Hemisphere and opposite in the Southern hemisphere. Stags roar and fight by jousting with their large antlers.

Method: Preferred method is in a high seat outside the rut, stalking during breeding cycles

*Disclaimer: Regulations and laws vary greatly from country to country and state to state. Please contact the local game management office for exact details and regulations pertaining to the area you are hunting.