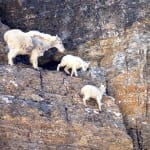 The Rocky Mountain goat or mountain goat (Oreamnos americanus) is not really a true goat. It belongs to a small family of goat/antelopes whose members include the European Chamois and have been restricted to North America for the last 100,000 years. They live in the mountains of the American and Canadian west from southern coastal Alaska southward, through British Columbia into the Cascade Mountains of Washington. And also live down along the Rocky Mountains from southern Yukon down to Idaho, Montana, Utah, Wyoming and Colorado.

Native Americans used to collect the shed hair and thick, luxurious wool from mountain goats to make winter blankets. They were highly revered for their hides for clothing. During the Lewis and Clark expedition, hides were collected from what the Native Americans called the “White Buffalo of the Mountains.” Some goat hides were collected by the explorer Captain Cook as early as the 1700’s. He thought they were a species of white bear.

Both sexes have horns with the billies (males) being 10-30% bigger than the nannies (females), a big billie can push 300 pounds on the hoof in the fall, but much less in the spring. A billie’s horns are normally thicker and tend to curve backwards, more gradually than the nannies. Their horns continue to grow throughout their lives, with few reaching 11 inches and occasionally some to 12 inches. Billies use their horns to display dominance during the breeding season around other billies, but don’t butt heads like sheep.

Normally they will stand broadside to each other displaying their horns and arching their backs. But, in a standoff with an equally matched opponent, they will circle each other and use their dagger like horns, to stab and hook into the others side to drive the other away. Nannies use their horns in the same manner, to not only establish dominance in the herd, but also to protect their kids (babies) and food. They are normally more aggressive because of this.

In the fall and winter they grow very thick hair that can range from 8 to 12 inches protecting the wool underneath. This helps to insulate them from the harsh climates they live in. A big billie in his prime is beautiful with a long beard and chaps on his front legs during the winter. The skin itself is black, which aids in warming the animal like a built in solar panel. In spring, they shed the coat for much shorter hair for the cooler summer months.

Mating season peeks in November, with kids born the following spring beginning in mid May. Normally nannies give birth to a single kid, but twins are not uncommon. During birth and for the first few days afterward, nannies tend to isolate themselves from the herd for safety. The kids are strong enough to get around on their own, within hours in the rugged terrain they call home. Nannies and their kids normally form nursery flocks, while sexually mature billies (3 years old and older) tend to live in bachelor groups during the summer.

Billies establish breeding territories that they fiercely guard in November. They do not collect harems of nannies, but will defend those that reside in their territory from other billies. During the mating season, it is common to distinguish billies by the yellowish taint near the back half of their hair, from the animal urinating to mark their territories.

In the mountains, the only true predators mountain goats have are eagles that prey on their young. When they move down into the tree line to graze, they are susceptible to bears, wolves, mountain lions, coyotes and even wolverines. The majority of mortality for the young comes in the form of falls, due to their unbound enthusiasm for running and jumping like most kids do.

The legendary climbing ability of the mountain goat comes from two different characteristics that are unique to them over any other animal in North America. They are built with powerful front shoulders, layered in muscle mass that they use to haul themselves up near vertical rock walls. Their hooves are sharp, hard rimmed on the outside and soft on the inside and work like suction cups, to give them the necessary footing for survival in the mountains. It has been said many times, mountain goat country begins where wild sheep country ends. Typically they don’t run from danger, but instead prefer to use these characteristics to methodically climb out of danger.

Mountain goats are both grazers and browsers depending on their habitat and time of year. They normally summer in high alpine meadows, where they graze on grasses, herbs, lichen, and low-growing shrubs. Typically most goats will migrate from alpine summer ranges to winter at or below tree line. But, some may remain on windswept ridges. As winter begins to arrive and the more succulent plant species are frost-killed, the feeding habits shift to browsing. Fir and spruce nettles, along with hemlock are important winter diet items. Feeding habits in winter are mostly a matter of availability. The biggest threats to habitat loss come from helicopter logging and global warming, allowing tree lines to grow higher, bringing predators with it.

Some mountain goats may live 14 to 15 years, but most don’t make it past 12.  Many hides of older goats show scars and missing teeth, most likely from falls.  It’s difficult to differentiate between billies and nannies, especially during hunting season, because they look so similar. Billies tend to look more “blocky” with a slightly higher shoulder hump. Using high quality binoculars up to 12 power to start with and spotting scopes with high magnification, along with a stable tripod, will aid the hunter in determining which animal to pursue.

This saves a lot of unnecessary and grueling leg work. For billies, look for the black glands that surround the base of the horns during breeding season. Veteran mountain goat hunters will tell you that big billies horns resemble stove pipes, big, black and thick. The trophy is in the eye of the hunter. If you are interested in taking an animal that will go into one of the various record books,  look for one with horns at least nine inches or bigger to start.

For rifle hunting, flat shooting and hard hitting calibers from the .270 Winchester on up to the various .338’s are best, for breaking down the massive shoulders to anchor your animal. This will hopefully prevent them from falling or sliding off the mountain. Keep shooting until the animal is down, as pound for pound, they are one of the toughest animals in the world to bring down. This is a time for premium, deep penetrating bullets such as the Nosler Partition, Swift A-Frame, Barnes TSX or Trophy Bonded Bear Claw. Top your rifle with the best quality scope you can afford. High magnification isn’t necessary with the good ole’ 3X9, probably just about right as most shots aren’t longer than 300 yards. Having a rifle scope with a high end magnification of up to about 14 is about the maximum you’ll need.

If bowhunting is more your style, I would recommend compound bows with draw weights anywhere from 60-75 pounds with fixed blade broadheads. You want all the arrow energy from your bow to penetrate as much as possible. I wouldn’t want to lose any of that energy with a mechanical broadhead. Muzzle loading hunters should probably choose bullet weights that start at 200 grains and go up from there, with powder charges from 100 to 150 grains, pushing that slug along like a freight train.

When stalking the mountain goat, it’s usually easier to come in from above them if possible, as they tend to be more wary of danger from below. They rely on the security of the cliffs around them, to let them evade danger. The meat is usually very good. In almost all adult billies, it is tough and is best if ground into hamburger or made into sausage or jerky.

Most mountain goat hunts are a once in a lifetime opportunity, so make sure you take lots of pictures before, during and after your trophy is down. You’ll want to capture all the special moments, of your time chasing goats, at the top of the world.  Good luck, hunt safe and ethically and enjoy your journey in the great outdoors.