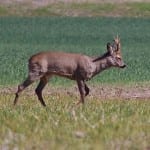 Roe Deer (called Reh in German) are the most common deer in Europe.  They prefer small clearings in forests. In the non-hunted season, they will appear in meadows in broad daylight, but retreat to the forests when the first shots of the season are heard. When startled, a Roe will paw the ground, releasing scent from glands between their toes, then run off a short distance and bark loudly, as a signal to others of danger.

Figure 1 “Photo” Roe Deer (Rehwild) in nature – The most common deer in Europe, the Roe Deer is hunted all over Europe, from the English Isles to the  Caucasus Mountains. This is the “Whitetail of Europe” as Ricky Mills says. Available to every hunter and plentiful like the Whitetail in North America.

Roe Deer are grayish-brown to reddish brown, small and lightly built, rarely getting larger than 50 lbs.  Does (Geiss in German) have a heart shaped white rump patch with a tuft of long white hair emanating from their genital region. A buck’s patch is smaller kidney shaped and lacks the tuft. Male deer grow antlers yearly. A normal buck will have 6 points (3 per side) which attain a height of 6-10 inches. As they grow older, the antlers grow larger bases (called Rosen in German) and add texture called “pearling” to the antlers. As they get very old, the antlers start to recede.  The rut is generally is in July and August. Fawns, called Kitz in German, (usually two) are dropped in the following June, and are weaned at six weeks and sexually mature at 16-18 months. Young Roe are very curious.

Translation issue when hunting Roe Deer in Hungary. The word for doe or Geiß in Hungary sounds like “Shoota”. When you are in the field with your hungarian hunting guide and he says, “Shoota” he is not telling you that he sees a nice “Shooter buck” and that you should take it. You should of course confirm your target before pulling the trigger any time that you are out hunting. But for the inexperienced international hunter, this is a key thing to know before heading out the door on your first Roe Deer hunt in Hungary.

Hungary is the number one country to hunt the Roe Deer and many European hunters will hunt this deer in their own back yards in Germany and other European countries their entire life, only to pay a lot of money to travel to Hungary at least one time in their lives to hunt the infamous Hungarian Roe Deer! If your thinking about traveling to Europe to hunt this game, a trip to Hungary while your in Europe is a must.

Nature Status: Roe Deer are not threatened anywhere across their range. Strict management quotas to ensure proper sex management and a good harvest of surplus without overhunting are common in many countries.

Natural Predators: Wolves, badgers, cats, foxes, bears, and wild dogs are some of the predators to this animal. Fawns, or Kitz in German, are also vulnerable to birds of prey while still small.

Habitat:Lives in woods, preferably with access to water and small meadows and grassy clearings. They are diurnal and crepuscular, meaning they come out in low light, such as early mornings and late evenings in low light. They are active, but not hunted in full darkness. Hunting is generally 90 min before sunrise to 90 minutes after legal sunset.

Rifles: Hunters have used everything from tip-barrel single shots to combination guns, to lever actions; most popular are bolt actions for quick follow on shots.

Optics: High quality optics with a large objective lens. Most hunters opt for a good 10x binoculars with a 2.5-10x56mm scope with an illuminated reticule to maximize low light shots.

Method: Ranges are generally close. Stalking is allowed by size of land and local hunting rules/customs is a great way to hunt. Most of Central Europe e.g. Germany, France, Czech Republic is too dense for stalking, so elevated stands over meadows are best. Sometimes are hunted during drive hunts.

Notes:Breeding is between July and September, and trophy size is variable, with bigger trophies generally in Eastern Europe. To hunt Roe deer in Denmark, Sweden, Åland and Finland the regulations for calibers are different. The hunting dates vary throughout Europe also. As an example, in Sweden they have spring hunts for Roe bucks (due to the nuclear disaster in Russia)  but on the island of Åland and in Finland there is no spring hunt for Roe deer. August 15th is when buck hunt starts in these areas and general season starts Sept 1st. Make sure you check the regulations in the country you plan on hunting Roe deer in as you want to be sure that your facts are straight before planning your trip.