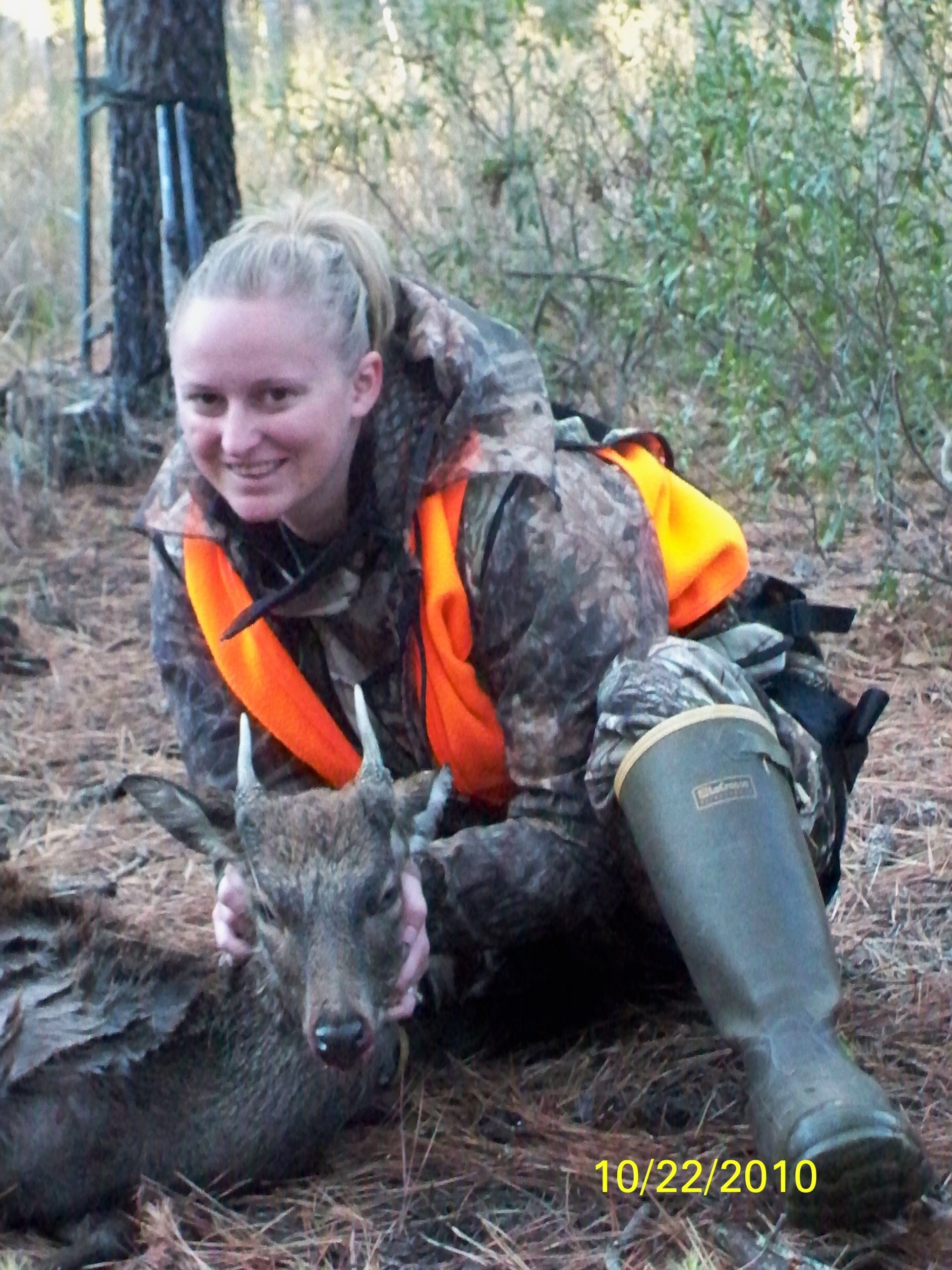 There it was again, the high shrill of a bugle. It was not a deep bugle so it had to be a younger Sika stag. I hear the splashing of something crossing the water. Anxiously I wait, looking for movement in the brush. Finally the brush starts moving, I start shaking, and out walks a stag, probably a year and a half to two years old. He was only fifteen to twenty yard away. I put the scoop of my muzzleloader on him, slowly squeeze the trigger and the gun goes off.

As the smoke clears, I see him run away, jump and land. I got him! I look at my watch; it was only five minutes after shooting hours started. The first thing I do is call my husband, Aaron Bonniwell, who tells me to wait at least a half an hour before I get down from my stand. I then call my father, Ken Starke, who also tells me to wait before I get down. That half hour felt like an eternity. I keep putting my binoculars on him making sure he was still down and finally I could not wait any longer and decided to get down after twenty minutes of waiting. I walk to where I made the shot and there was a nice pool of blood. Knowing I put a great shot on him I run to where I saw him fall. As I see him lying under a pile of brush, I am overwhelmed with excitement and adrenaline. I finally got an opportunity to take down this magnificent creature and what a great feeling it was.

I had been waiting four years for a moment like this. In that one moment, I saw all of my hard work pay off. I had been hunting this secretive animal for four years and I was hoping that this would be my year. Four years ago, my father, my husband and I found out about Sika deer hunting from a family friend. He told us you have to go and experience it yourself. Sika love marshy areas so you will need to wear waders or knee boots to hunt them. I was open to hunting a new species so we sent in our forms and patiently waited to see if we would get drawn for the hunt.

We hunt Sika deer in Cambridge, Maryland at the Blackwater National Wildlife Refuge. Sika are not originally from the United States. They originated in Japan, Taiwan, and Eastern Asia and were introduced to the United States in the early 1900s. Sika love marshy areas and usually only move early in the morning or right near dusk. Along the east coast of the United States, the average Sika stag weighs between 70 and 90 pounds and an average hind, or female, weighs around 50 to 70 pounds. Sika deer are related to the elk family and not white tail deer. They have a bugle like an elk but much higher. The rut for a Sika occurs in November and is the time when the majority of the bugling can be heard.

Every year we went and I never had the chance to see a Sika deer while hunting. I saw them along the road, in the fields, or heard them in the distance. The first year we hunted and heard our first bugles. We were hooked. We would go sit at the check station just to see a Sika in person. My father shot at a stag our first year hunting and missed. He hunted hard until he finally killed his first Sika in our third year of hunting. I guess the third time was the charm for him as the saying goes. He killed an amazing 3×3 stag. Any stag that is a six point or more is an awesome trophy stag.

Photograph – Ken Starke with his 6 point Sika (3×3) that he harvested in the Blackwater National Wildlife Refuge.

Our fourth year of hunting was when I finally killed my first stag. It was a year and a half old spike. A perfect animal for my first stag. I look forward every year to getting the form in the mail and filling it out in order to enter the drawing. I have fallen in love with this majestic creature and they have become my favorite species of huntable wild game.