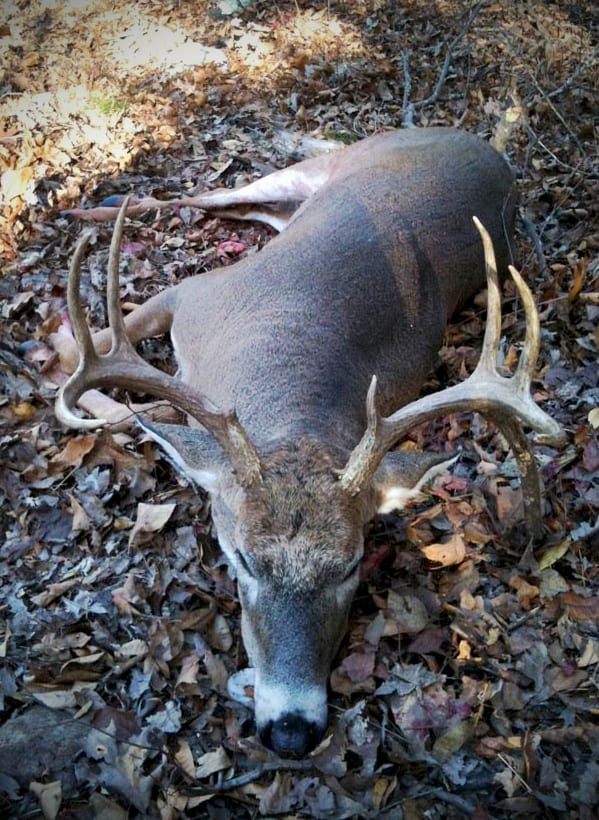 This weekend I was supposed to move stands and set up ground blinds on my property in Southern Missouri. I made plans to meet a buddy who was in town from Indiana. We planned to pick up a ladder stand I left on some public ground last year and move it to my land about an hour away.

I had not seen him since the end of hunting season last year and looked forward to spending time together. After losing his job, he moved with his brother to Indiana and found a good job there. I told him to bring his bow just in case we had time to hunt, but it didn’t look good.

I picked him up on Friday afternoon and we headed south to meet with his step-brother in the town, where my stand was and visit for a while. We got up early Saturday morning and hit the woods to get my ladder stand. We walked down the draw and joked about someone being in the stand when we got there; we stopped to check out the rubs down both sides of the trail and laughed as we remembered hunts gone by, walking this same trail. We talked of deer missed and taken, and slowly made our way to the stand only to find someone sitting it! We both knew him and he wasn’t too mad that we ruined his morning hunt, especially after I explained it was my stand and I had the key to the locks that held it to the tree to prove it.

We took down the stand and loaded it on my trailer, said our good byes to his family and headed to my property. He kept hinting that he really wanted to hunt and had just spent money on tags, so we hurried along and made the hour trip in 45 minutes. As we got up the mountain to my place he was really getting excited about going hunting. I made up a reason why we should wait and put up the stand and ground blind on Sunday and suggested we go hunting that evening.

You would have thought it was Christmas! By this time it was a little after three in the afternoon, we put on our hunting clothes, sprayed down with scent blocker and headed into the woods. I told him about a scrape I found the weekend before and how to get there. I gave him some clip on reflectors to find his way out in the dark, wished him luck and sent him on his way.

I loaded my crossbow and climber on the four wheeler and headed out; deciding to change the memory cards out on my trail cameras. I headed down the new trail I made toward the first camera, stopped the four wheeler as I always do about 50 yards from the camera, walking in the rest of the way. On the way out, I noticed two large scrapes right in the middle of my trail, that weren’t there last week. One was a big scrape, about 4 feet in diameter, and had been recently worked over. I carefully avoided the new scrapes and headed down the trail toward the other camera locations.

After I changed out all the memory cards I decided to hunt over away from where my buddy was. I parked the ATV under a lay down and picked out a nice tree, strapped on my Summit climber and started climbing up the tree. I was about ten feet off the ground when I realized I left my crank handle needed for cocking my crossbow back at the camper. I started back down the tree and got to what I thought was about two feet from the ground. I was mad that I forgot the handle, thinking about how I could get to the camper and back to my stand without ruining Jimmy’s hunt. I stepped off my platform reaching for the ground, which was not close enough; I tried to bounce back up to the platform so I could lower myself a little further. That was a huge mistake! I unfastened my safety harness thinking I was on the ground, when I bounced and took my weight off the upper part of my climber; it rolled around the tree and proceeded to drop me off the platform on my side and back. What I thought was two feet was actually closer to five so I hit the ground pretty hard. Luckily I landed feet first so I didn’t break anything, though I did bruise several parts including my ego.

I regained my composure, un-hooked my stand from the tree, gathered my crossbow and slowly took the walk of shame back to my ATV. I headed back to camp and nursed my scrapes and bruises. I checked the memory cards on my computer and saw several turkeys, which were new, and a small buck on the trail cameras. I lined up dinner and waited for Jimmy to come back from his hunt. He returned shortly after dark, cold and ready for dinner. We started a fire and I told him of my mishap, listening to him jump on my case for not being more careful as I cooked dinner.

We enjoyed a dinner of pan seared backstrap and fried potatoes. As we ate and talked I kept thinking about that big scrape I had found on the trail and how it wasn’t there last week. I hadn’t seen any new bucks, or any bucks at all, except for the wide 4 point I let walk the weekend before. I did not see a buck on the trail camera, but I knew he had been there in the last few days by the condition of the scrape.

I made up my mind that no matter how bad it hurt, I was going to hunt that scrape in the morning. The conversation was good that night, as it always is when Jimmy is at camp. We talked and laughed around the fire until the coals were just embers; though all night my mind kept returning to that scrape and what might be visiting right at that moment.

Needless to say I didn’t sleep very well that night and woke up every hour it seemed, until my alarm went off at 5:00 AM. When it did I jumped up and got dressed and made some coffee. As it brewed I went to my bow case put the cocking lever on my bow and smiled as I stretched my aching back. Jimmy was quiet that morning but eager to get back to his stand, after we finished our coffee we both went our separate ways. After a parting fist bump and a “good luck” we headed off to our stands. We had decided to hunt till about 10:00 AM then we would come back and hang the ladder stand and put up the ground blind that we had put off from the day before.

I got on my ATV and headed to the trail where I had seen the scrape. I parked about seventy yards from the area I wanted to hunt. I walked slowly looking for a tree that gave me the best view of the scrape, making sure to be far enough away without worrying about being spotted right off the bat. I found the best tree I could in the dark, attached my climber and headed up about twelve feet settling in. I raised my crossbow, cranked the handle and cocked it, then put the handle in my pocket.

I watched the world come alive and listened to a choir of coyotes sing to the falling moon. As the sun rose and woke up the world for another glorious day, I thanked God for the chance to witness his awesome creation, the chance to hunt and fellowship with my friend. It was windier than I liked but not so bad I could not hunt, I settled in for the morning hunt.

I didn’t see a thing until around 9:00 AM when a small group of turkeys came down the ridge, jumping and chasing each other about sixty yards away. I wondered if they were the turkeys I had seen on the trail camera the day before, had they gotten closer I would have taken the shot, since I did have two turkey tags.

I checked my cell phone, saw Jimmy called and left a message. He wanted to hunt a little longer and walked down the mountain finding a few rubs and scrapes on the other side of the property, where I hadn’t been able to scout yet. As I put my phone away movement caught my eye and there coming down the trail seventy yards away was a very nice 8 point buck heading right for that scrape!

I looked him over good and could tell he was a shooter, probably at least 4 years old, I raised my crossbow following him in my scope as he approached the scrape about forty yards away. When he reached the scrape, he started to paw the ground, and turned giving me a perfect broadside shot. I remember seeing the lighted noc sailing then disappearing in his side but couldn’t tell where he was hit.

I called Jimmy and told him I shot a buck and needed his help tracking and got down out of the tree. I walked over to where the buck had been and didn’t find any blood and started getting nervous. I found the arrow and saw it was covered in blood and hair, so I knew it had passed through but still no blood. It took Jimmy about a half hour to get to me. When he arrived, we started tracking, looking for blood. My heart almost leapt from my chest when we found the first few drops about ten yards away. As we continued tracking, the blood trail was easier to follow until we saw him lying under a pine tree twenty yards away. After a few high fives and several congratulations I put my hands on my buck, we had trailed him over one hundred and fifty yards.

Figure 1 “Photo” Stephen Reed with his 8 Point Missouri Whitetail that he harvested on 30 October 2011.

I brought him back to camp, after several pictures and some joyous phone calls, I field dressed him. When I pulled out his heart, I was very surprised to find a star pattern sliced right through the middle of it. He ran about one hundred and fifty yards with a hole in his heart! That just goes to show how tough these mature whitetail bucks really are.

Needless to say the ladder stand didn’t get put up, neither did the ground blind, but Jimmy and I had another great hunt and made another memory in the field. All in all it turned out to be a great weekend and like I always say “Sometimes, you just gotta hunt!” If you have the opportunity, you better take it, because you can’t fill your tags from the camper…