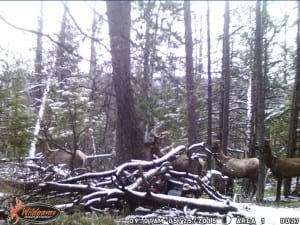 Black bear, otherwise known as Ursus Americanus, are curious animals. They are medium sized in comparison to other bear species and the most widely distributed across the North American continent. They cover the western US, thrive in states like Maine and even call parts of Florida home. They are omnivores, but if you ask me they look like pretty vicious carnivores up close. They seem to thrive in forested, hard to access areas with plenty of vegetation. Their fur can be white, blond, cinnamon, or light brown to dark chocolate brown or even jet black and any variation in between. To add to this they have immense strength and great dexterity even being able to open glass jars.

To watch from afar, one would think it’s no trouble harvesting a black haired brute; however, up close it’s an entirely different story and one quickly gets an appreciation for the wildness of this creature. Massive K-9s, large bodies, sharp claws and their ability to walk through the forest on the driest of days without making hardly any noise at all create one extremely intimidating animal.

All this considered, I can’t help but be fascinated by these brutes and have a desire to chase them. The thought of seeing one in the wild is nerve racking yes, but also a privilege. In years past, I’ve had them creep up to within 20 yards of me before I realized they were there. When I did, we would both surprised each other. I’ve seen them on many occasions while elk hunting and in most cases I just try and enjoy watching them. This past elk season, I awoke from a nap to find a cub digging at the ground for grubs 70 yards away with a sow nearby snorting and stomping on the ground not able to see me, but knowing something was not right.

It’s these types of experiences that made me want to pursue them and dedicate an entire Spring season to harvest one. I have harvested a bear in the past and I had seen so many, how hard could it be right?

Hunting bears in Wyoming is unique. The mountains are 9,000’+, so spot and stalk across vast acres of National Forest that time of year is pretty much out of the question given the roads are still closed from winter snowfall. The bears have the advantage here. The only option is to hunt on the edge of National Forest land between private property and snow socked mountains. Taking into consideration that baiting is legal in the Cowboy State, gives the hunter the advantage. Suddenly those small areas accessible to the average Joe become much more promising.

Without knowing anything about how to do this, I quickly realized I should talk to a game warden to get some information. In Wyoming, most game wardens are more than willing to give up some general information to help law abiding hunters. I contacted the Laramie Game and Fish office and then followed that up with a visit. They informed me of where to hunt, how to register your bait site and what to use for bait. After scouting my area quickly with my children in tow, I decided to try my luck just a week later.

My only other source of intel aside from Game and Fish was talking to local folks, Very few people have experience in Black bear hunting here in Wyoming by the way, and I I Also tried Youtube of course. I was pretty “green” at this, but I decided to go into the forest anyway.

The one challenge with the site was to find a spot that was one, accessible during the season and two, not crowded by other hunters. I had already, picked up some maple syrup, dog food and honey buns on the way up (intel gathered from Youtube and confirmed it was legal in the regulations). The learning curve is steep and when you only have 2 weeks (3 weekends) left in the season (considering I had just moved here), it was basically a brick wall. I put everything on my back (treestand, ladder, bait, trail cam, bait buckets) and started hiking. I found a high spot that was sheltered and hard to get to. Then built a small wall with sticks to prevent the bear from approaching me from behind, giving the shooter, another advantage. I then set up my treestand and trail cam. Given I had so little time to hunt, I’d decided to hunt that first day. I returned back to the truck then hiked back in with my hunting gear. I sat for maybe 8 hours before calling it a day, a very long day.

The next weekend was exciting. Now my bait had been out in the woods for a solid week. Who knows what I would find. When I got to the site, I was shocked. My bait buckets were gone. Initially, I thought of other hunters, then I noticed the poop. There was fresh bear poop everywhere. I spent a great deal of time trying to locate the buckets and successfully recovered one. It had been carried 100 yards away, peeled carefully open and then licked clean. The other bucket was missing in action. I had bears, which were confirmed on the trail cam later that night.

Figure 2 ”Photo” Multiple bears are hitting the bait site, it’s time to get into the treestand.

I sat in the treestand all day, but nothing came in. It was cold, even during mid-May it was cold and snowing again. Freezing cold in my stand, I had enough for the day. This was much harder then I originally thought. On my way out, I crossed two sets of tracks, a sow and a cub, that were made within the last hour and only about 200 yards from my stand, since it had just started snowing and they were on top of the fresh snow. This boosted my confidence a great deal, but did nothing to fill my tag.

Figure 3 ‘Photo” It’s not only bears coming to the bait site, elk are also frequent visitors.

The next week the weather turned and even at that elevation, it was 65 degrees. I changed it up a little. Rather than go in for a full day and get uncomfortable in the stand for 12-14 hours, I made the decision to go in after 2pm and see what shakes loose. I also decided that since this would be my last weekend of the season, I needed to use my rifle. It would bring some additional capability to my setup instead of using my bow.

At 2:30 pm I’d gotten to the stand, dump some fresh bait in my bucket, and found a comfortable patch of grass nearby. I opted for not going into the treestand. I get so uncomfortable in a treestand, I do a great deal of shifting in my seat and I think it probably keeps critters from coming in. As I was so comfortable on the ground I dozed off and before I knew it, it was 5:30 in the evening. I awoke to some noise in the woods, branches breaking. At first I wasn’t sure of what it might be, but then it continued and I knew it had to be an animal. Looking up to my left I immediately noticed a patch of fur. When I picked this great spot in the sun earlier, I thought I knew where the bear had been approaching the bait from. I quickly realized how wrong I was. The bear were not approaching from the opposite side of the bait, but from my side and I was between the bear and the bait.

Panic immediately set in. When I sat up and looked in the direction of that patch of fur I had just seen, we locked eyes. He was headed straight for me. Sitting between two log pole pines, was a big, blonde boar only 35 feet away. We were both confused. I quickly ducked behind a tree and he caught my movement and started to snort and pound on the ground. To say I was fearful of what was going to happen next is an understatement. I was completely panicked.

Luckily, he decided to back out a little and go behind the bait in front of me. More than likely he was trying to catch my wind, but I was not going to wait for a second chance. I brought my rifle up, looked for an opening between the trees and when the fur came into view I would fire. My rifle was going up and down, up and down. I could not calm myself in time and my heart was going a million miles an hour. A huge cloud of smoke appeared before me and all I could remember was shrapnel from a tree that I saw through the scope and the bears head below my cross hairs.

I looked for a good 45 minutes and saw no sign that I had hit him. That was my last opportunity of the season. I was upset that my reactions were so poor and that I had panicked so badly that it ruined my chances for a decent shot; however, at the end of the day, there was not a scratch on me and I learned a valuable lesson. USE THE TREESTAND! I put it up for a reason and sitting on the ground was very comfortable until I was in the way of a big black bear and his meal.

At this point, I’ll take these lessons into the upcoming season and be grateful to live in such a beautiful place with such amazing animals. Tag filled or not, the only thing that matters are the stories you bring home not the trophies.