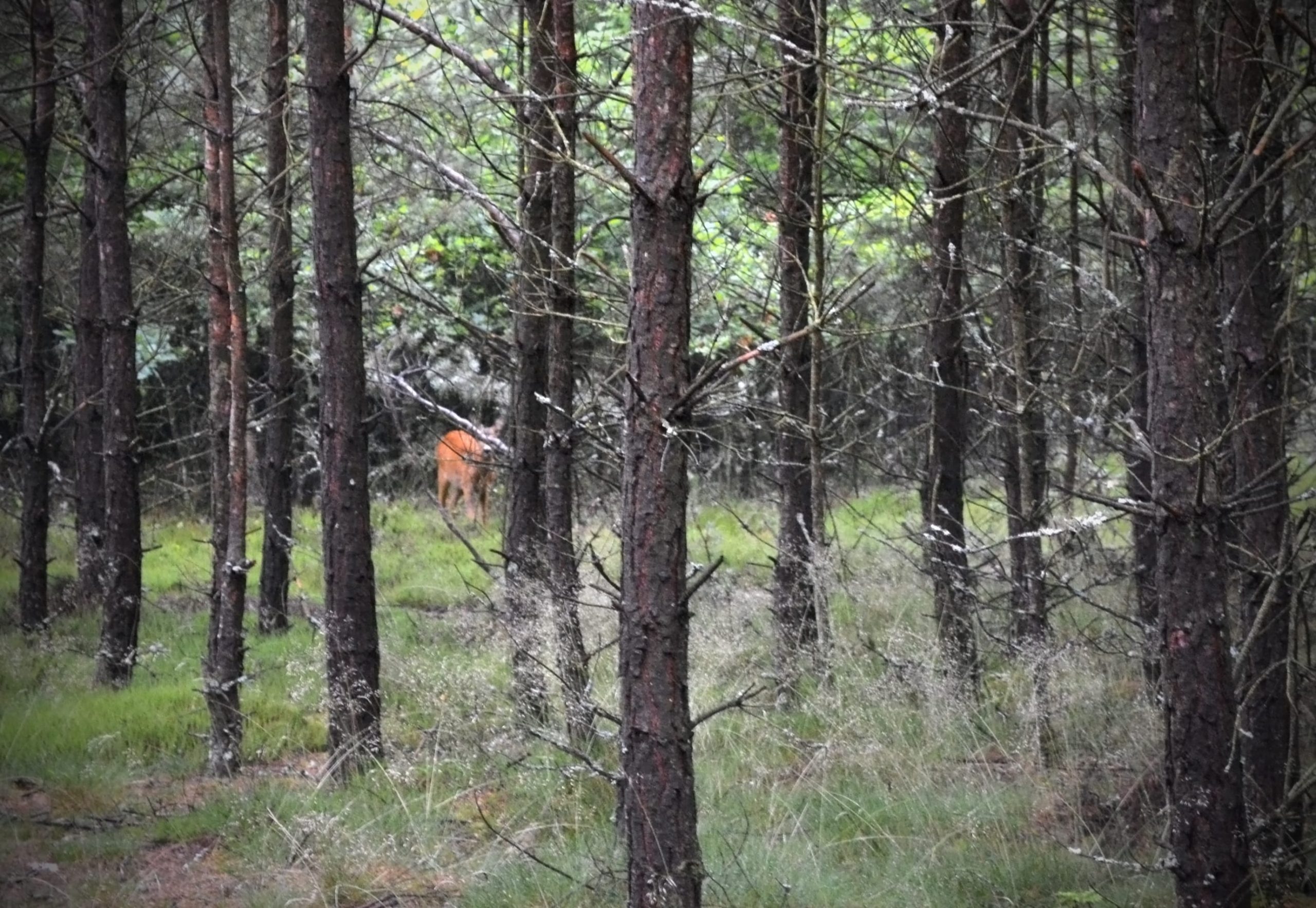 At about 1830 on 3 July 2011, my daughter (Lorelai) and I left home, heading to the closest patch of forest that might reveal a few interesting critters. We grabbed our camo rain gear, video as well as my still camera and headed about a half a mile past the Graf Sports Park off of Felsmuhlstrasse and parked on a side road.

Both my kids are very familiar with the outdoors. Not 100 yards from the truck, Lorelai spotted fresh deer tracks on the shoulder of the road. Because of the slight drizzle, slipping along quietly both on and off the road was very easy. We first spotted a very large Hase (Hare) crouched down at the base of a pine. He barely gave us time to focus on him, before he took off in flight putting distance between us. Due to the lack of undergrowth we were able to visually track him for about 35 yards. What really made me laugh was the unexpected gesture that my daughter made. As soon as he busted and began his escape, she drew down on him with her imaginary 20ga shotgun and tracked him till he was gone. If she had that old Savage single barrel of hers, she would have provided us with a Crockpot full of Hase for the 4th of July, which we love.

With her in the lead, we continued our still hunting (with cameras) moving forward through the trees. We came to a corn field and decided to stand at the corner and watch over the small area for about 30 minutes. Any longer than that and I think she would have gotten restless, so I decided not to push it. We gathered our items and began to depart our position, when we noticed a small Geiss feeding within the tree line. We slowly began easing toward it and I was again amazed at how Lorelai would use the trees to balance herself, so that she could very slowly lift and place her feet down with little or no noise. We made it to within about 20 yards of the deer before I began to take some photos. We got three pictures, but due to the density of the trees, they were not very good ones.

Figure 1 “Photo” A Geiss (female Roe Deer or Roe doe) in the tree line that Henry Browning and his daughter spotted while out enjoying nature in Germany.

One last critter encounter came on the road heading back to the truck. I had stopped and walked off the road to, as my wife would say, “pay my water bill”. My daughter began to call for me to bring the camera. After returning to the road, she told me that as soon as I stepped off the road, a Fox (Rotfuchs) ran across the road in front of her. I had no reason to doubt her for she is very familiar with what a fox looks like. Her brother and she have helped me skin a many of them.

Figure 2 “Photo” Henry Browning’s daughter Lorelai taking some photographs while out with her Dad for a day in the woods.

All in all it was a wonderful day in the field with my daughter. I am glad she would rather be in the woods than in front of her Wii game system. I literally introduced both my kids to the outdoors before they could even walk. I logged many miles across the Fort Lewis Training Area with them in one of those handy dandy back pack carriers. Thankfully, I had the support of my wife while doing this, even though she herself is not an outdoorswoman. Both my kids know many game types and how to care for a down animal. I have ensured they know what guns are and how to safely handle them, something all of us, not only our kids must continuously be trained on.

Many of you (Outdoorsman/Women) have dogs which you spend an ungodly amount of time and money on here in Germany. Can you for one second imagine what an impact on a kid’s life we could have, if we focused that same attention introducing them to the outdoors? I have in the past and still am an active member in Big Brothers/Big Sisters, Boy Scouts of America, and the Children and Nature Network. To pass our heritage, our traditions, and our cherished sport on to the next generation is all our responsibility. To quote a saying from the Versus Outdoor Channel, “Take a kid Hunting and Fishing, you won’t regret it.”

Lorelai and Phillip, till next time… Love you both.