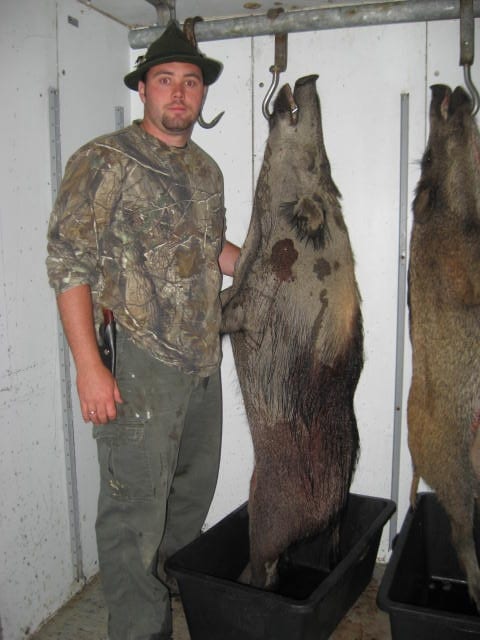 After completing Infantry Basic Training at Fort Benning, Georgia, I was one of four lucky soldiers that got the privilege of being shipped overseas. With orders for Baumholder, Germany I hit the ground running and got the lay of the land. I immediately signed up for the next hunting course, 10 weeks later I was a licensed German hunter. After numerous attempts to join a Revier (hunting lease), I finally found a dream lease with loads of Wildschwein (wild hogs).

The location was perfect, heavy thickets in the middle of swamp land surrounded by hardwoods and farm fields. Now, I’ve done my share of hog hunting in Georgia, Florida, and Texas and I thought I knew a great deal about hog hunting but; my Jagdpächter (hunting lease holder) very quickly showed me I knew very little about the European Boar. With over 35 years of experience on European pig hunting, he taught me a great deal of tips and tricks.

Every Sunday we all went out to the revier to look for fresh signs and to repair Wildschaden (game damage) from the previous week. Three Sundays later my Jagdpächter noticed that an old wheat field that wasn’t harvested yet was covered in fresh pig sign. I was told to sit and wait there that evening on my little fold out dove stool, until the wild boar came
back for more. The field was about 50m deep and 300m long. The hunter explained to me in fast Jaegersprache (hunters speech), that the pigs would come down from the thick brush about 200m up the hill. He actually gave me a time the pigs would come; “somewhere between 2200 to 2230 “. I thought he was joking; but boy was I wrong! In place by 2030 and after
checking the wind, I readied myself for the wait. The old wheat was about 3 feet high with large open patches, there were pig signs everywhere. I picked a spot on the farthest side of the field from where I was told the hogs would come from. Now I must admit, I was a bit nervous about sitting in a 3 foot high wheat field waiting on wild pigs to run at me; Grand-Pa didn’t raise no fool…..

Figure 1 “Photo” A wild boar with his winter coat on. The tusks are known as Waffen (or weapons) in the German hunting community and do alot of damage to the hunting dogs that Jäger pit against them for driving and tracking of Wildschwein.

True to his word at about 2205, I heard what sounded like a bull dozer coming down the hill. At first I kind of panicked, thinking no way; there is loads of pigs coming down the hill and I’m sitting on a stool! Easing my CZ 30-06 off safe, and switching on my Schmidt & Bender 2.5-10 x 56mm red dot scope, cranked it down to 2.5 power, boy I’m glad I did; no need for 10 power at 50 meters. The monster Rotte (herd group) of boars stopped at the edge of the wood line next to the field. Everything went in a very weird silence, nothing was moving or making any noise, not even the birds were chirping. I was scared they heard my heart since it was about to jump out of my chest. The same feeling I had when I harvested my first boar came back to me. I could see small groups start moving in the same field with me. There must have been more than 20 pigs in this little field just 30m away, and I was losing day light fast.

All I could see were big black blurred spots in the wheat, not enough to take a clean shot. Then I noticed some larger boars were coming in the field from my left. They came in running and started chasing and fighting the smaller boars. Now if you’ve never been sitting on a stool 30m from fighting and squealing wild hogs, you’ve been missing out!

I noticed a very large mature boar that was taller than the wheat in the back left corner of the field. In the German hunting class we were taught that 99% of the time when it’s a Rotte of pigs that the largest is the Leitbache (lead sow), so I reframed from shooting her as to not disrupt the group hierarchy. A group started eating and working its way 10m to my right. Just in case it was the Leitbache, I let the first boar go through. On the fourth pig I put my red dot sight directly on the shoulder and squeezed the trigger, boom! A pig busted out 5m from my left running down the same lane of wheat I was sitting in. After the first shot I instinctively jacked another round in the chamber and focused on the next little critter, boom! After the second shot I jacked another round and looked across the field. There were wild pigs running everywhere. By now there was little to no daylight left. Since the wheat was a light color, I could make out dark figures but that’s about it.

The larger boars were now snorting and grunting at me from the woods. A minute later after my first shot, I heard two very quick shots. I recognized that cannon sound as my friend’s 9.3 x 74mmR double barrel roared. A moment later my phone started to vibrate.

I explained to my Jagdpächter what had happened and that the pigs are still in front of me. He said he was on his way and not to move. It took a lot to stay put and not go looking for the animals that I had downed, but the wild hogs in a wood line also kept me from moving. I heard his Suzuki Jimny pull up about 100m from behind and then the familiar sound of “Allie”
his German hunting terrier. That dog came running like a madman on a mission and hit the wood line like a shot from a gun. Pigs started squealing and crashing through the thickets like they were on fire.

After everything calmed down, I walked just 3 paces to my left and was startled to find a frischling (piglet) maybe 20 kg or over 40 pounds or so laying there. The bullet hole went between his shoulders and out his mid belly. I went searching for the first pig I had shot and it did not take long to find. At 12 paces she was laying there, dead in her tracks.

While field dressing the game back at camp, my other hunting partner pulled up with a field dressed 60 kg (132lbs) Keiler (boar) just a little less that my dressed 72 kg (158lbs) Bache (sow). Keep in mind; I took aim at the smaller pigs of the groups. Three pigs is not a bad day on an evening hunt in Germany. Once all the game was cleaned up, we all enjoyed an old European tradition of having a wee bit of homemade schnapps to bless the hunt.

My first wild game taken in Germany was a big sow taken from a stool in the middle of a wheat field in the dark. This was just the beginning of a new chapter of a lifelong obsession of wild boar hunting. Until next time, “Waimannsheil”!

Figure 2 “Photo” Chris Norris with one of his harvested wild boar in Germany.

Wild boars are omnivorous and opportunity eaters. They will feed on rodent, mushrooms, worms, roots, carrion, fruit, vegetables and are also known to be cannibalistic.

Only about 1/3 of the Waffen (tusk) protrude out of the lower jaw. The other 2/3 runs under the jaw line.

Never refill your Kirrung (feeding area) without wearing gloves. It leaves your scent all over the Kirrung and discourages boar from coming back.

When scouting in muddy trail areas, always cover an area of old tracks so the next day you can tell if they traveled that trail that same night.

If you can help it, never go a day without checking your Kirrung. If the pigs traveled that night to hit it and it’s empty, they might start going elsewhere, maybe even the neighbors lease…