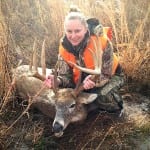 Everyone who hunts has “the dream” of harvesting that perfect animal, the one that they can brag about and everyone talks about afterward. I have had “the dream” since I started hunting at the age of 13. I always saw pictures of the big bucks that people harvested and could not wait until I would be able to take a picture holding my big buck. Fourteen years later, “the dream” came true.

During the second shotgun season of the year, my husband, a friend, and I decided we would go hunting on that first Saturday. We got up bright and early and were debating what stands to sit in. My husband told me he wanted to sit with me. We decided to sit in a double stand on a new property that was purchased earlier that year. I always enjoy the hunts when we sit together. We never saw anything that morning, but we had a great time. We laughed at each other and the squirrels that we thought were deer. It was a cold morning and we decided to sit until about 9:00-9:30 am. We debated sitting in the stand longer, but we got down anyways. As usual, I unloaded my gun before getting out of the deer stand.

As we walked out of the woods, my husband told me to load my gun. He said “just in case, you never know”. We got out of the woods and started to walk down the ditch to our four wheeler. We were only ten yards from our four wheeler, when my husband looked up and out stepped a buck onto the ditch. It was a beautiful tall antlered buck. We both dropped to the ground and I tried mounting my gun. My husband quietly told me to get my gun up. I was struggling to get my glove off. When I finally got the gun up, I could not find the deer in my scope. I was rushing and the deer stood there watching us. Finally, I found the deer in the scope. But then I was everywhere, up in the sky, on the back of the deer, on the ground. I could not keep the gun steady. My husband was getting ready to get on the ground, so I would have a rest. I told myself, relax and breathe. I was able to take a few seconds and put the cross hairs behind the front shoulder. I pulled the trigger as I heard my husband say “take your time, breathe.”

After the shot, we both jumped up and watched the deer jump over the ditch. He started running in the grassy field next to us. Thankfully, my husband is taller than me and he was able to watch the deer’s antlers run through the field. All of a sudden I hear him say, “Chris, I don’t see him anymore!” Our friend came up to us and couldn’t believe what had just happened. He saw both of us walk by and then heard the shot!” I immediately called my Dad. When my mom answered, I could barely breathe, let alone talk. All that would come out was “I need to talk to Dad”. In the background I heard her say, she shot a deer.  When he answered, I started screaming “Dad! I shot a big buck!” He told me to wait a few minutes and then call him if we found it.

We all walked 80 yards to where I shot the deer with our fingers crossed. We were not exactly sure how far I was from the deer, when I took the shot. We kept walking and looking around when I just happened to look to my left. I saw a red spot of pink blood, it was a lung shot! The excitement grew as we noticed more and more blood. We crossed the ditch and found even more blood. We decided to wait a few minutes before we continued, just to be on the safe side.

About ten minutes passed and neither of us could wait any longer. We slowly started to follow the blood trail. The two guys followed the blood, while I walked ready to shoot if the deer jumped up. We continued to follow the blood, which felt like forever. All of a sudden, the blood stopped and my heart fell. That’s when my husband looked to the left and found more blood. The deer had started to make a U-turn. I was shaking as we turned and all we saw was antlers. After a giant hug from my husband, I called my Dad again and said, “Dad it’s a monster!” His reply was, “I’m on my way, be careful with the antlers!” Since it was late in the season, many bucks were dropping their antlers.

All I could do was stare. The only big bucks I had ever seen were my husband’s and father’s. This one was mine. My husband was extremely excited at the size of the deer. We took a few pictures enjoying the moment. Then the two guys realized they had to drag this deer 60 yards through the field and over a ditch. It took us a while, but we managed to get it over the ditch.

When we got back to the house, everyone was waiting. The first person I saw was my Dad. He ran over and gave me the biggest hug, before even seeing the deer. Everyone was shocked at the size. “The pictures give it no justice” my Dad said.

Figure 2 “Photo” Christie Bonniwell and her son with her buck!  It’s not just hunting, it’s all about family.

After that, the day was a blur. I spent it sending pictures and answering phone calls. Word gets around fast in a tiny town and a tiny state (Delaware).

I did not kill a record buck, but the buck I killed was a great deer. He was “my dream”, my once in a lifetime deer. I may never take a buck that size again, but I am thankful for that opportunity.

Some people never get to fulfill “the dream” and for others it takes years to make it happen. I was fortunate in being able to have an opportunity to fulfill “The Dream”.