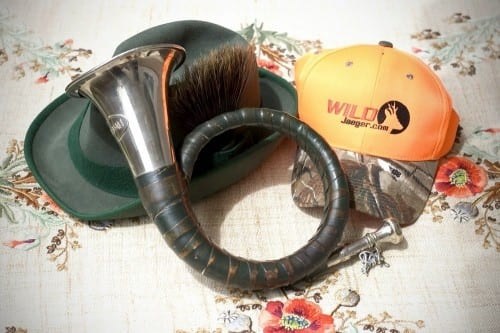 The Hunting Horn – By Erich Held

The sounds of the hunting horns (Jagd Horns) have been a part of the hunt since the middle ages. It is an important part of hunting tradition throughout Europe. In the United States it has a smaller, virtually unknown roll in hunting.

It is estimated that 50,000+ hunters throughout Europe blow the hunting horn. The horn to this day is still a part of many group (social) hunts. There are some groups who play the hunting horn in the United States; however the number of individuals who play this horn is unknown.

The horn itself is very simple. It is made up of a mouthpiece and a coiled brass tube that opens to a bell. The sounds produced are referred to as natural notes. Notes are controlled only by the player’s ability to blow varying amounts of air into the horn while tightening or loosening the lips. No valves are used to manipulate the air flow which allows only natural notes to be played. The horn was utilized because of its ability to be heard over a long distance and its efficiency in comparison to the human voice.

Photograph – A German hunting horn used in traditional/formal hunting ceremonies to this day.

Large Hunting horn (Parforce): originally from France and was popular with equestrian hunting because of its size it could easily be hung over the shoulder to free up the hands. It produces a deep rich tone while having the ability to play some higher notes dependent upon the player’s ability. This horn evolved over time with the addition of valves and some other changes to become known as a French horn.

Small hunting horn (Plesshorn): is smaller in size, held with only one hand but probably the most recognized as a hunting horn. It has a vast range of notes that can be played once again dependent upon the player’s abilities.

The songs played with these horns have a variety of meanings. As part of the hunt these are used to communicate to other hunters, drivers or hounds. Hounds were trained to respond to the horn the same way many modern dogs are trained to respond to voice or whistle commands. Other songs communicate to the hunters to gather, advised drivers to slow down or stop, or signal when an animal has been harvested. Each animal has its own song which is played to honor the game that is harvested. Other songs are simply a celebration of the hunt, nature and camaraderie. You may have heard these songs or sounds in the past since the horns have been used to help portray the hunt in movies, operas and even cartoons.

I personally have had the pleasure to play the hunting horn with the St. Hubertus Club Chicago for the past twenty plus years. The group was founded by German immigrants to the United States. With them they brought the German hunting tradition and the Jagd horn (hunting horn). The group performs at various German cultural and hunting events in the mid-west. Only two other such groups are known to exist in the United States.

Photograph – Herr Hugo Baum playing his hunting horn as part of the ceremonial portion to an annual town hunting festival in Krum, Germany.

Photograph – Erich Held (right in the picture) playing his hunting horn as part of a hunting group in Chicago, USA.

For more information about these horns or music please email e.held@wildjaeger.com

PrevPreviousEuropean Social Hunts: The game is plentiful and rich with tradition!
NextHunting tales from the Dark Continent – “The Warthog that wasn’t supposed to be mine”.Next