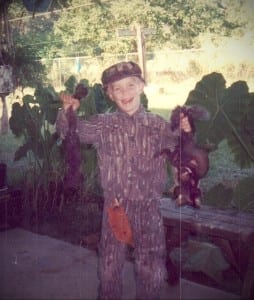 Note from the Author:
Daddy, I am grateful for everything you taught me and I hope that I will be able to give my son everything you gave me. Happy Father’s Day to you and all the fathers across the world!

Figure 1 “Photo” One of many hunts my Dad and I went on. To this day my favorite hobby is to head outdoors for a hunt with my Dad.

The greatest hunting partner in my life is my father, William Chandler. My Dad and I have hunted together for over twenty years. It is wonderful to be able to spend time with him in the great outdoors. Some years have been good and other years have been slow. For as long as I can remember, he has taken me out to the deer woods, as we call it in Louisiana. I can recall many Thanksgivings waking up at 3am to go to the US Army Base Fort Polk to get there before any of the other hunters. As you read this article, you will understand why I believe my Dad is the best hunting partner. Hopefully you will also be able to relate to that person everyone has, accompanying them in the great outdoors; year after year enjoying nature and stomping through the wood chasing deer, squirrels, rabbits, upland game.

Figure 2 “Photo: My Dad (William Chandler) checking out the new gun I bought. I guess he was making sure I made the right choice.

To this day I can still remember the day that I “harvested” my first deer. I use the word “harvested” in quotes because I really didn’t take the deer. I was not old enough to take a gun into the woods yet. I had an old toy cap gun that either my Dad bought for my birthday or was passed down from one of my older brothers. We were out walking around and three deer almost ran us over. I was so young that I didn’t even see the deer. I was acting like I was making a scrape to show my brothers. I remember Dad saying hold your ears and the shot went off. There were back straps on the grill that night!

When I started hunting with my Dad, the gun he used was an old .375 Winchester. We nicknamed that gun “Old Faithful” and it has harvested more deer than I can remember. He would buy a box of twenty bullets, and out of those twenty, he harvested around twenty deer over the years. He waited till there were five bullets left to buy another box. Dad only needed one bullet for each deer he harvested. There is always a story that starts with “but, there was a time”… There was one time though that scared me for the rest of my life (not really but it was funny). We were walking home one day and crossed a power line when we “jumped” two deer. Usually, my Dad only had three bullets in the gun, but my brother used it and the gun was fully loaded. Dad shot at the deer and missed at least five times. I could not believe that he had missed. I thought, “MY DAD NEVER MISSES!!!” That was a day that I will never forget! To make a sad story a little better, after the sixth shot he finally harvested one of the deer.

Figure 3″Photo” One of the many deer my Dad has taken over the decades. (Left to right) Heath Chandler and William Chandler

A more recent hunt my Dad and I went on is one that I will remember the rest of my life. The story will be passed down to my son and hopefully he will pass it on to his kids too. I flew back to my parent’s house from Germany for opening day of deer season. I only had three days to hunt. I was so excited to go back to the woods with my Dad, after an absence of about seven years while serving in the United States Navy and as a Department of Defense Civilian.

I was starting to give up hope, after two long days of hunting and nothing come around except big Louisiana mosquitoes. Finally on day three in the afternoon, Dad and I headed out to the woods. My uncle called and asked me to go to one of his deer stands and hunt. I decided to take him up on his offer and Dad took another stand around 300 yards away. Right before I got off the ATV, my Dad said, “I am going to call my shot.” I told him he was crazy and laughed. If I am not mistaken, he said that he was going to shoot a deer at 3:30pm. He told me not to get off my stand because he wanted me to hunt for the rest of the evening.

Around 3:20pm, I looked at my watch and kind of laughed and said, “Well he is going to shoot in ten minutes.” When I looked up, two deer walk out at 170 yards down a shooting lane. I remember saying to myself, “I will be the one that shoots at 3:30pm.” So after a few minutes, I shot and harvested a nice size doe. My Dad texted me asking, “Was that you shooting?”  I was a little confused at the text message and about that time, he shot. I looked at my watch as it turned 3:30pm! I promise on the Bible that he called his shot. I joked with him later saying he had that deer tied up!

Figure 4″Photo” After just a couple hours three hunters went into the woods and came out with three deer. The middle deer is the one my Dad called the shot on! By the way my deer was the biggest! HAHA (left to right) Bryn Chandler, William Chandler and Yancy Chandler

Some of the best memories of growing up with a loving Dad are just being in the great outdoors, camping and spending time with each other. I cannot remember one bad thing that has ever happened while we were together. Like most hunters, whenever you go out in the woods, it is a time to reflect and get away from the everyday stresses. It is a time where good friends are made and where family bonding occurs. I have traveled from Japan to Germany since joining the United States Navy and now as a Department of Defense Civilian. In all the different areas, I have seen great bonds between Dads and sons or Dads and daughters, but none as close as the hunting bond and spending time outdoors with your Dad.

This is more of a personal tribute to my Dad, but I believe that everyone that goes outdoors with their Dad has the same feeling as I do deep down. It is always nice to know that my brothers or I can call Daddy and say, “Hey, let’s go to the woods” and we know exactly what he will say, “after the Saints play!” okay, he won’t say that but he will say, “Lets go!”

Figure 6 “Photo” My son Tristan and my Dad about to head out for a midday ride around my parents house. Twenty years ago that was Dad and I headed out somewhere!

God bless and remember to take a child out to the woods. A couple of hours in the outdoors with a child could change their lives as well as yours! Happy Father’s Day and for all the Dads out there, remember shoot straight and maybe one day I will see you in the great outdoors.