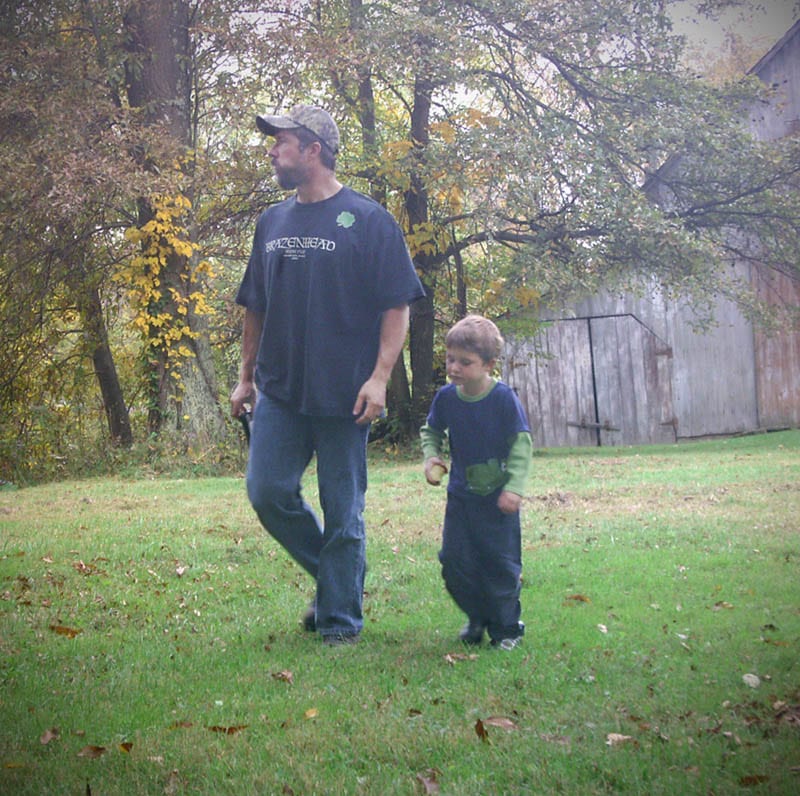 This year is my second season to hunt in Ohio. Last year I was able to tag a little four point on the property that my wife’s family owns and allows me to hunt. There is an old farm house that is uninhabited yet fully livable where we frequently stay on weekends. Behind the barn are a couple of old apple trees with a modest yield that still attracts most of the areas deer. I had put up a tree stand near there about a month after the season opened.

The reason for such a late start last year was due to me working as a contractor in Afghanistan. There wasn’t time to scout the property out that much and I wasn’t going to go traipsing all over it mid-season and spook all the deer. So I settled for what I did know, which was that the deer were passing by the apple trees on their way to and from wherever they were going and returning from. At least that’s what I thought I knew and it worked out, deliciously.

Figure 1 “Photo” A game camera photo that captured Craig Foreman with his son doing some scouting on his property.

This season I had a little more time but in my opinion still not enough to properly recon my property. I moved the stand further back in the woods near the spot last years tag was filled. I Also put up some trail cameras, one near the apple trees and one near the stand. I threw out a little corn from time to time to see who was showing up and I did see a rub or two in the area. It’s always fun to see the expressions the animals make as they strike a pose and look at the camera when it clicks their mug shots. You never really get the full story of what goes on in the woods until you review your pictures. I had shots of crow, fox, raccoon, squirrel, skunk, groundhog, someone’s dog, a cat, and of course the deer.

Nothing out of the norm just a guy decked out in scentlok sitting in a ladder stand hoping to bag the big one. Most of the time I tried to get there an hour or so before daylight and other times I would go out mid day and wait for sun down. I saw the deer come and I saw the deer go and I named them not to personify them but so I could keep tabs on them.

During bow season I passed up three regulars (mama and two youngsters) these three passed buy almost like clockwork and I enjoyed watching them. Sometimes they would come close enough that they had to step around my ladder.

The other cast of characters is a little spike making his way into the world and about four other bucks with some antler issues. One I refer to as “Prince Gnarls” because of his young age and the way his tines poked about so crookedly. “Lefty” seemed to have some nutrition issues, his coat was ragged and one antler was considerably smaller than the other. Another fellow has a drop tine “Tinee” yet the rest of the rack is not too unusual and finally a buck with a big side and a small side, “Biggie Smalls”.

The only one I never saw in person was a fair sized buck (Mr. Elusive) who only came out in the wee hours of the morning at least according to the time stamp on the cameras. Although I did hear him taunt me with snorts and wheezes from the wood line while I was packing up my gear to return home but it was too long after dark and I couldn’t do anything but cuss back at him.

Figure 2 “Photo” One of Craig Foreman’s game camera photographs of “Mr. Elusive” a deer that eluded Craig during his hunting season in Ohio.

Shotgun season rolled around and I had put up a ground blind near the camera that had the most activity. One morning around ten the trio strolled by about thirty yards out and I propped my 870 pump up on the collapsible monopod to take one home. While I glassed each one to determine my best option I noticed what a great day it was to be outside. The sun was shining which is a rarity for that part of Ohio, but it does happen. Suddenly I just felt that if I take one of these deer now I will have to go home and not be able to sit and enjoy this great day. Finger off the trigger I continued to watch them through the scope in all their glory go about doing whatever it is deer do when they are in their element. I felt just as satisfied as if I had filled that tag.

Another day “Lefty” rolled in looking around like he was just wanting someone to shoot him, pitiful as he was but all I wanted was for him to go away and stop creeping me out with his crazy antlers. There was temptation to spook him off but I felt observation a better option. Shotgun season came and went.

Figure 3 “Photo” One of Craig Foreman’s game camera photographs of “Lefty” a deer that has one normal sided rack and one small sided rack.

My muzzle loader was a little crusty but cleaned up easily. I didn’t get to sight it in though because as I was packing it into the car I had a funny feeling about it and immediately took out the breach plug. Upon closer inspection it was crusted shut and I could not for anything get that thing to open up. A trip down to Gander Mountain proved fruitless since most other people thought ahead and got their stuff in order before the season opened and there were no compatible breach plugs. Same story across the street at Dick’s. Yes, of course I need to plan ahead and shoot the muzzleloader when checking the shotgun. I felt like such an amateur!

The bow was back out of the case and a few dozen arrows downrange confirmed that I could hit a still target as long as it looked like a block of Styrofoam and my vision wasn’t choked off by adrenalin and heart attack level blood pressure.

Another fine afternoon that was partly sunny or maybe partly cloudy, whichever, I was communing with nature and becoming one with the surroundings. Until the squirrels started mocking me. And I know they were mocking because the madder I got the more they mocked. This had to stop. Mr. Squirrel was given a fair warning while I lazed him at 37 yards, his behavior was giving away my position and would not be tolerated. He called my bluff, I drew back my bow, he raised his head in suspicion, and the arrow flew true to its destination. I did see and hear the deer later, just before dark, but they seemed a little spooked and moved downwind across the creek keeping their distance and I packed it in for the night after they went wherever they go.

A week later I got an offer I couldn’t refuse for more money to go back to Afghanistan for a month and a half which cut my season short. I don’t consider this an unsuccessful season considering the fun I had. I also noticed the things that can be improved on and all the excitement for next year’s season, and I also harvested one squirrel don’t forget.

Some important things I took away from this year was confirming the recon/scouting of the area is one of the most important aspects of the hunt since most of the other operations and employed techniques will be built off of that. Considerations like the most traveled trail, where they bed down, where they water, where they feed, rubs/scrapes. Plenty of things like trail diversion, more tree stands and better locations, another ground blind, food plots all need to be considered.

I took a notebook with me while hunting and when the ideas of what could be done better popped up it was jotted down with hopes that later I may compile them into a winning plan for next season. I consider this hunting season to be the majority of my scouting and its all downhill from here, the scouting part, the hunting part for some reason still depends on what deer feel like doing at any given moment and it’s doubtful that they know either.

So with a little planning on paper here in Kabul and more planning and implementing when I return home at the end of March I will have a season of articles worth reading next year. It is my opinion that taking notes throughout the season will seriously improve the next year if you take the time during the off season to put all the notes together. Come up with a plan and implement that plan based on the deer’s activity you gather for that year. Not doing so is probably a waste of your time spent in the woods and will produce the same results season after season. There is no shame in sharing ideas and asking others for help. After all, that is part of what hunting is all about.

Figure 4 “Photo” Another photo of the buck that got away “Mr. Elusive” and a doe he was tending. Just on the wrong day…