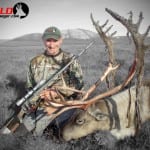 The beads of sweat ran down my forehead stinging my eyes with their salty touch. My fingers were doing their best impersonation of wiper blades trying desperately to keep the salty invaders from blocking any possible visual cue of my target. I continued uphill as fast as I possibly could. My intended target had been swallowed up by the endless swells and depressions of the far northern Alaska Tundra.

Twenty minutes ago I spotted a suitable trophy for my first ever Caribou, but now it had vanished along with its 30 companions. I had heard countless times from many different caribou hunters that once Caribou start to move, it is almost impossible to catch them. Being from the western United States and a little stubborn, I felt up to the challenge of putting this conventional wisdom to the test. After all, I had spent all spring and summer running 20 miles each week to prepare myself for this hunt. I felt that I was in the best shape I could be in, since my early twenties. My five mile average speed was about 40 minutes. So one mile in the tundra should not be too bad, if it would get me close to one of these beautiful animals. I thought I was ready for the challenge.

The hunt started like so many other great hunts, with lots of planning. My Father and I planned on having a true wilderness adventure for barren ground Caribou. The logistics of the hunt were greatly simplified because one of my good friends is a hunt broker. He suggested we book our hunt with one of his reputable drop camps. This sounded like the perfect fit for us.

The planning started in earnest after the deposit was made and dates were set. For the next 6 months, I gathered the best gear I could. The feeling of anticipation was almost palatable as September approached. And before I knew it, we were landing on a desolate gravel bar north of the Arctic Circle in one of the smallest planes I can imagine flying in.

When I first spotted the Caribou, I instantly dropped my pack and stripped off my Spotting scope. It showed that not only were there several bulls in the group, but one was a very nice specimen. For the record, earlier I used at least two hours stalking a group consisting of one small bull and several cows. If I had used my optics instead of my legs, I would have saved myself at least a mile of grueling struggle. By the time I got close to the animals, I realized the bull was not the one I wanted.

I should explain to those of you that have never had the pleasure of walking on the muskeg covered tundra how difficult it is. I regularly hunt the Rockies in central Idaho, where I daily climb 2000-3000 vertical feet in the pursuit of both Elk and mule deer. I often cover 10 or more miles in a day. I consider myself in excellent physical shape and having strong mental attitude. But, the seemingly flat tundra is a different beast entirely. The tundra is covered with grass humps placed so close together some are actually growing on top of other clumps. In my limited experience, I found there to be three sizes of these grass covered humps, ankle busters, knee busters, and neck busters. These humps made walking almost impossible, forget running. I think a 100 yards dash on tundra would be quite comical and would take about 5 minutes. I attribute these treacherous humps to why most considered it impossible to get close enough to a caribou if it is moving. Given all of this, my stubborn side said it could be done, so off I went.

The last time I saw the group of caribou they were only about three quarters of a mile ahead of me. On flat even ground it would have only taken about ten minutes at the most, to get within range. But in this cursed humped ground, it would take a full 30 minutes. I knew it would require some energy and luck to get close enough to make it happen. I pushed myself as hard as possible to crest the next swell. After a few panicked seconds, I spotted the tail end of the group crossing the next ridge. I waited for the animals to walk out of sight and hurried down and up the next half mile depression. This time when I crested the ridge, my stinging eyes were greeted with the sight of the entire group of Caribou stretched out on the next ridge. I immediately dropped down on my belly and started planning a shot. The caribou seemed content to graze slowly back and forth between patches of what seemed to me to be grey colored grass. I took my time preparing for a shot. I knew the distance was long, but I also knew I had been practicing all summer for these longer shots. I felt well within my lethal range.

Several years previous I had a long range gun built specifically for shots up to 1000 yards. The gun is built on the action of a Remington 700 in the 7MM caliber. It is topped with a Leopold scope with a drop compensator built specifically for my load though this gun. This combination coupled with some knowledge and practice doping the wind, gave me the much needed confidence in making the shot.

After spotting the bull I had been chasing for over a mile, now within rifle range the excitement level increased about 500 decimals. I could hear my own heart racing and could feel the blood pulsing in my cold ears. I tried my best to stay calm and ranged the animals with shaking hands at 416 yards. For the record I used my Leica 1600 rangefinder. I then dialed the gun to the 420 yard mark and held one minute of angle to the right to compensate for the 5-8 mile an hour wind, and slowly increased the pressure on the trigger. At the sound of the shot, the bull jumped and walked on his tip toes for about 30 yards. This really concerned me, so I set up again and took a second shot. The bull went down only a few seconds after the report of my second shot. For the record, the two shots fired at 416 yards were only 4 inches apart and both were direct hits to the lungs. This is testament to the true power of these tundra walkers.

My first bull was still partially in velvet and was a beautiful specimen. Now all that was left were two trips across the longest four miles of flat ground I have ever walked with 100 pounds of boned caribou meat on my back. After 6 hours and two trips, I fell into a steamy lifeless pile on my bunk with a big smile plastered across my face. I was exhausted but satisfied, both with my first bull and my own conditioning. It felt good to have one in camp and a very respectable one to boot.

In the area we were hunting, each hunter is allowed two caribou tags, so my hunt was far from over. This allows hunters the ability to shoot a nice first bull and then hold out for an even nicer bull to fill their second tag.
On the third morning of our hunt, I headed north from camp after first crossing the river. I climbed a large ridge to set up the spotting scope and do some glassing. We had seen caribou each day, but they were in small bands and scattered. I don’t think the migration had started in earnest yet, because we continued to see caribou heading in all directions. There didn’t seem to be the urge to head south like I had expected. This made glassing much more important.

After the two mile hike to the top of the nearest ridge, I set up to find a suitable second bull. Almost immediately, I spotted a group of caribou heading from the mountain I was on out into the vast valley below, that was about a mile due north of me. I spotted one very nice bull and instantly decided if I was given the chance, I would take him. After a few minutes of packing, I was doing my best mile sprint across the muskeg tundra. I remembered so many people telling me it was not very likely to get within range of moving Caribou. But, my stubborn side kicked in full tilt again and I was on the sprint/stumble toward an ambush location I thought I could intercept the bull from.

The race lasted better than a mile across the seemingly flat rolling hills, before I was about to give up. The bull had simply out walked me as I stumbled along. Then for reasons only known to him, he decided to turn and walk toward me. That was the break I had needed. I quickly set up for a shot, ranged the animal as he walked, and adjusted the gun for the yardage. Then I set up across my spotting scope tripod for the 200 yard walking shot. At the report of the run, the bull dashed his last 20 yards before coming to rest on the tundra.
Now all that was left was to carry two over stuffed packs, the four miles across the most difficult “flat ground” I had ever seen. After the second load was dropped at camp, all I could do was smile. I still smile every time I see the trophies from my Alaskan adventure. I should also tell you that my father was also able to harvest two very nice trophies, but that’s his story to tell.

If a trip like this interests you, I recommend that you do everything possible to be as physically fit as you can be. Walking in the muskeg tundra is very difficult, but you can prepare for it. My suggestion to prepare for muskeg would be to fill your living room with bowling balls, basketballs and maybe a few exercise balls. Then fill any unfilled floor space with tennis ball. Cover the entire living room with six to eight inches of straw to hide all of the obstacles. Now turn the lights off and do twenty easy laps around the room. When you can do this without breaking a sweat or an ankle you will be ready for your own Northern adventure.