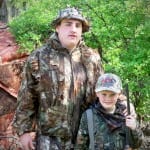 As temperatures rose inching higher in anticipation of spring, my 8 year old son, Tyler, started talking about his first turkey hunt. I had purchased a Remington 870 Wingmaster in 20 gauge the previous fall, so his gun and ground blind were ready to go. His camo was washed and folded just waiting for the big day. I found him on several occasions, sitting in the basement staring at the turkey decoys. He was trying to make turkey sounds with his mouth.

Here in Missouri, the youth turkey season is March 31st to April 1st. My nephew Ryan was coming along to help with the hunt.  Tyler got home from school at 4:30 pm and we drove to Illinois and picked up Ryan. Then we made the three hour trip to our lease in Southern Missouri. Once we got there, I started the generator and we set up camp. We unload the 4wheeler and made all the bed’s. We had to be up and ready to hunt by 6:00 am.

I purchased a new turkey call for this season from J&J Custom Calls and it arrived the day before we left. I was looking forward to a weekend of great hunting and spending time with my son and nephew outdoors. I brought along my bottle of White Acorn Scent from 3D Hunting Supply and my new call.

Opening day of youth turkey season was a beautiful day! We were up and in the blind as the sun came up. Once we settled into the blind, I took out my crow call and did my best crow imitation. A big tom didn’t answer but a bunch of crows did. I called a few more times, more and more crows answered and flew to nearby trees. Before long there were 15-20 crows squawking all around us, something Tyler and Ryan had never seen.

From trail cam footage, we saw that turkeys were in the area. We were excited at the opportunity for Tyler to take his first turkey. We had the decoys set up at 25 yards in front of the blind and Tyler was positioned in his chair, ready for the birds to come in. I started with a few clucks and some soft yelps. It wasn’t long before I heard a response, from a hen off in the distance. Not the gobbling we thought we would hear. As I continued to call, she got louder and louder and our excitement grew. She got close enough to see through the woods, then we heard a gobble in the distance and she headed that way. To hear and see a turkey up that close made the atmosphere in the blind even more exciting for the boys.

Our next encounter was a lot like the first one. But, she never got close enough to see and we never heard a tom. She just called back to us, as she crossed the ridge and headed on to where she was going.

The last encounter that day was something that Tyler and I will never forget. It was a little after 10:30, a while since we had heard anything. We were thinking of heading back to camp. I decided to call one more time before we headed back. The response was almost immediate. No sooner did I start to call then a hen answered and she was close. She went into high gear and yelped and clucked and yelped, getting closer and closer. Every time she clucked and yelped, I mimicked her with my response. This just whipped her into a frenzy!

But, what I was the most impressed with, was the sound of my new call. We couldn’t tell the difference between the call and the bird! It is the most authentic sounding call I have ever used. She ran right up to my decoys and continued to cluck. I answered her back after every cluck, until she finally circled back around the back of our blind. Then she headed down the ridge still clucking, with me answering, until she was out of range and we could not hear her any more.

This whole process took about 10 minutes; it was one of the coolest things I have ever seen. I believe she was trying to get that tom decoy away from the hen decoy, and we were in an argument over it. Both Tyler and Ryan were quietly laughing at how much she wanted that decoy to follow her. I have never heard a hen be that vocal for that long. I think it had to do with how authentic my new call sounded.

After she left, we waited for a little while, but didn’t hear anything more. We headed back to camp, very excited about having that encounter. It is all we talked about that night at camp. Ryan was so impressed with the new call, that we ordered him one from the camper that night.

As we slept, things took a turn for the worse. At about 1:00 am the generator quit working, so I switched over to a backup generator. We were back to sleep by 1:30 am, unfortunately it ran out of gas around 4:30 am. I had removed the gas can with the gas from the truck, to make room for the backup generator, before we left home. I didn’t have any gas to refuel it. It took about an hour to find an almost empty bottle of 2 cycle engine oil, mix a gallon of fuel, and go back to bed. When the alarm went off a little later, we didn’t hear it.

Needless to say, we got a late start that morning. We quickly ate breakfast and grabbed our gear. I loaded the shells into the magazine of the gun. We hurried to the blind and settled in. Once we were settled and quiet, I took out my calls and started to purr and cluck then yelp. We got an answer almost immediately! This time it was a tom and he was gobbling back from what sounded to be about 100 yards away. I called again and it wasn’t long before I could hear him coming across the ridge towards the decoys.

I motioned for Tyler to get ready and he raised the gun to his shoulder. The tom was about 10 yards from the decoys, when it hit me. In my haste to get set up in the blind, I had forgotten to load a shell into the chamber! I had just cost my son his first turkey! I tried to quietly jack a shell into the chamber. Unfortunately, that’s impossible in a pump gun. The turkey left the county in a big hurry. To say I felt horrible would be an understatement.

In spite of losing a great opportunity, we were determined to continue the hunt. We waited for things to settle down and then started calling again. Before long we were rewarded with some more action. It wasn’t exactly what we were looking for, but it was still pretty cool. Movement caught our eyes off to our right. We thought maybe a turkey had slipped in, but it turned out to be a large raccoon. He roamed around the decoys for a while, and then waddled off up the trail. Tyler was really excited to see a big raccoon so close.

As we sat there softly calling, we kept hearing rustling outside the blind. We could tell something was moving across the top of the blind. A little orange and yellow colored lizard about 4 inches long ran across the window netting. He stopped right next to the opening where Tyler’s gun went through. He sat there for the next hour watching Tyler and lounging in the sun. He kept running up across the roof of the blind, then back to the window screen. Tyler loved it. The hunt ended with no more turkeys coming by, and the lizard eventually heading to parts unknown. We went back to camp, loaded up the car and headed home.

All in all, it was a great hunt and time well spent outdoors with my son and my nephew. I still feel bad for costing him his bird. I’ve heard him tell the story of his hunt several times. The crows, Teresa the Turkey, Ricky the Raccoon, and Larry the Lizard (yes he named them all), get far more story time than my screw up, which helps. It has reaffirmed a valuable lesson, something in my haste to succeed as a hunter I had forgotten, that hunting is supposed to be fun. I need to look at the outdoor world through the eyes of an 8 year old every now and then, slow down and experience the wonders of nature. It’s not just about the harvest, but taking more time to enjoy the Larry’s, Ricky’s, and Teresa’s of the woods…